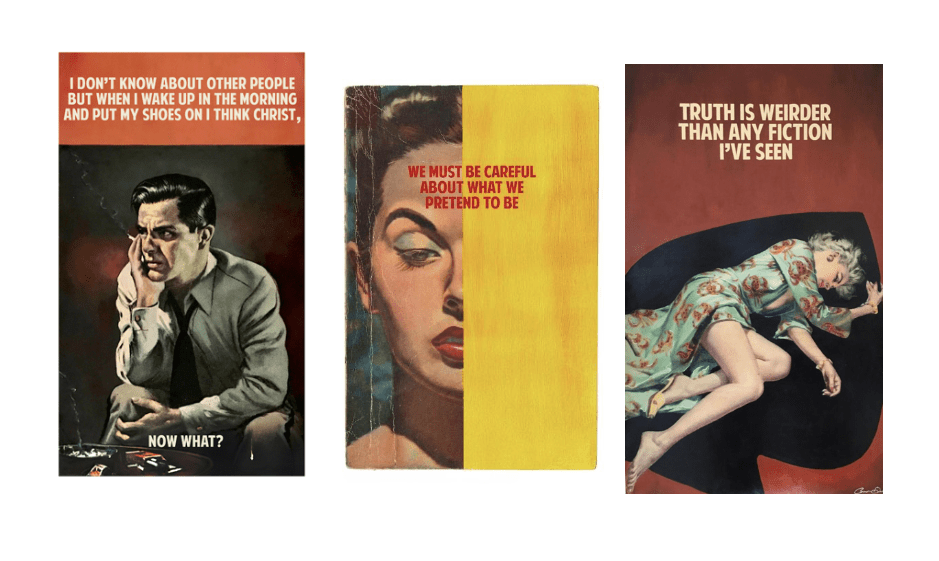 If Jean-Paul Sartre had a sense of humour and a creative oeuvre that extended beyond heavy lectures delivered in Parisian theatres and 800-page long essays, I think he may have come to make The Connor Brothers’ Pulp Fiction series all on his own. For this reason, it is clear that the artistic duo’s work is a genuine and valuable contribution to the tradition of Western philosophy. The difference being that hanging The Connor Brothers on your walls will win you ‘cool points’ in a way that vintage Huis Clos posters will absolutely not. And now, the last remaining works from Pulp Fiction are on display at Box Galleries, Chelsea.

The Connor Brothers is an artistic pseudonym for British artists Mike Snelle and James Golding. Their story is laced with public deception. The pair have slalomed between fiction and reality in the press, posing as twin brothers, Franklyn and Brendan Conner, who had supposedly escaped The Family, a fictional cult in California, to become artists at the age of 16.

It won’t come as a tremendous surprise that both Snelle and Golding studied philosophy at the University in Cambridge, the place of their first meeting and initial artistic collaborations. The study of philosophy often draws the attention of eccentrics, contrarians and more often than not, depressives, and Snelle knew he fitted the bill from an early age. Throughout his life, Snelle described himself as being “too thinky,” and at the age of 15, experienced a mental breakdown. He was diagnosed as obsessive-compulsive and placed under psychiatric care, soon turning to the philosophy books for answers. The pages were lucrative: “It was like, ‘This is what’s been doing my head in for 15 years.’ It was exciting to discover I wasn’t some weirdo after all,” he told The Telegraph in 2014.

The dramatic tale of their escape won the pair immediate attention, selling out exhibitions across the world and setting an auction record at Bonhams. Although this urban legend has since been shattered, the Brothers are somehow still shrouded in the captivating story, shining a light on the complex relationship between truth and fiction in their portfolio. The pair argues that this wavering and transient dichotomy embodies the paradox of art: that fiction provides the space and freedom to challenge the traditional nature of truth. 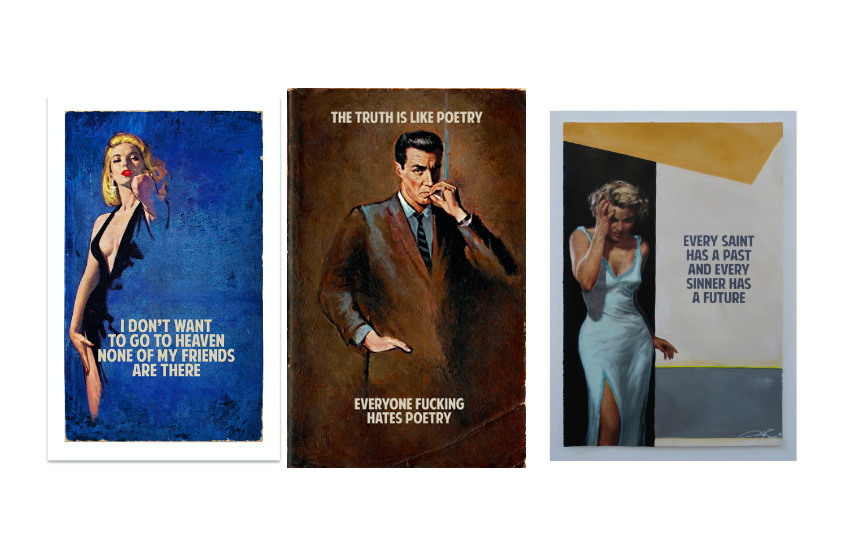 “Since childhood, I’ve experienced terrible anxiety,” says Golding. He worked as a junior dealer on a City trading floor, alleviating his mental disquietudes with a near-fatal heroin addiction. He goes on: “Getting high temporarily relieved my anxiety, but when I came down, it returned more fiercely.” Golding now uses his art, addiction therapy and physical activity to aid his recovery, channelling his spiralling thoughts into works that tackle his life-long existentialism in healthy and creative ways.

The Connor Brothers’ obsession with ontology and existentialism was catalysed by their respective struggles with mental health issues. That they have found humour in these age-old philosophical traditions is no small feat. Their art was conceived as a vehicle to make themselves laugh and create a space for open conversation to discuss both their lows and their highs in a culture that deems even the disclosure of mental health issues taboo. Pithy captions gleam in white block capitals over the highly saturated, often surrealist portraits of 1950s pin-up girls, bringing new, dryly hilarious meaning to the gaudiness of the original pulp magazine prints.

The captions are swift, cutting allusions to loneliness and self-perception, meditations on love and musings on loss. The typography contextualises the vintage illustrations that feel at once modern and timeless. Each piece explores anxieties that every generation has reckoned with, giving the work a universal appeal. Existentialism, in this regard, can be seen as the most democratic philosophy. There is no one generation that has avoided the insatiable pull of its introspection.

Absurdity is a fact of life that we must all face. The Existentialists called this a recognition of our anxieties about existence, morality and freedom, not letting them get the better of us. Without their implicit humour, the absurd can become insurmountable: a hyperbolic bubbling-up of anxieties that meddle with our perceived ideas about the nature of existence. The Connor Brothers’ work is so successful in dealing with the absurdity of life because it balances dread and humour, resulting in comical, resigned apathy.

From the existential void expressed so adeptly in ‘Christ, now what?’ to the prescriptive, reassuring definition in Insanity: a perfectly rational adjustment to an insane world, the prevailing message of Pulp Fiction is one of acceptance. This life is to be questioned, mourned and (most importantly) mocked.

These rare and special works are only available for a limited time only at Box Galleries, Chelsea (+44 7786 033 180/boxgalleries.com)