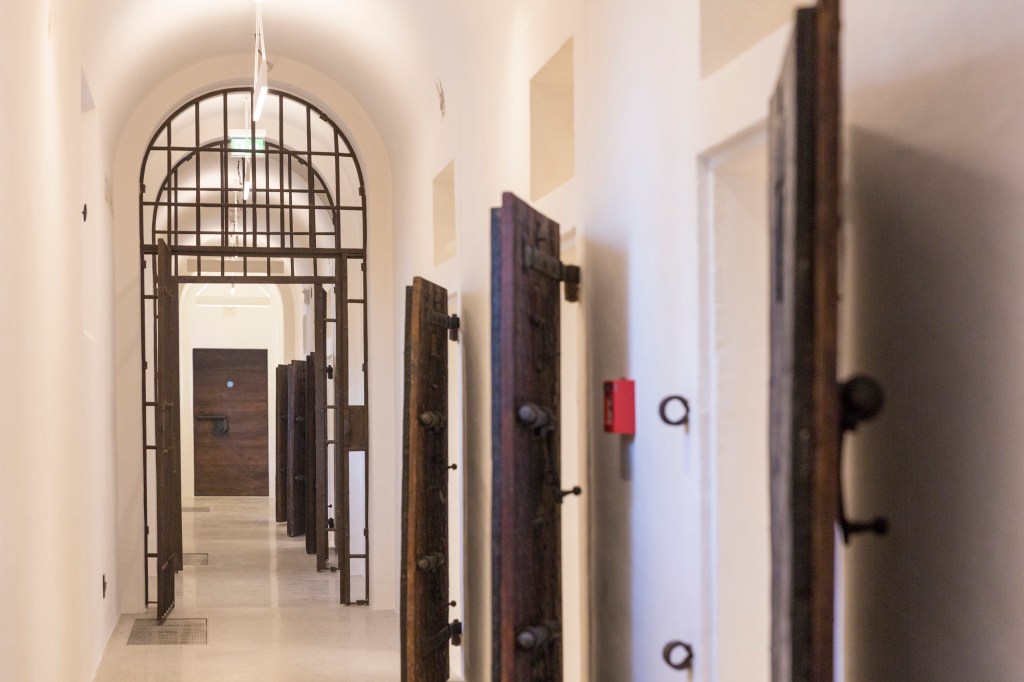 When the Kabul-born, Berlin-based artist Jeanno Gaussi was five, her mother cut her hair so that she’d appear old enough to be allowed to leave the country with her aunt – and without her parents. Her installation, entitled ‘For Sitara Hamza’, and rendered in cotton wool, fabric and macramé, was inspired by this life-changing memory and features hair-like strands interwoven with sections of scarves bought in a market in Karachi, which, according to the inscription, were intended for a woman called Sitara Hamza, to decorate and lengthen her hair.

Gaussi, whose work revolves around memory and the search for identity, grew up in Afghanistan, India and Germany, and developed an understanding of ‘home’ under the influence of three different cultures. “The notion of ‘home’ becomes a concept that keeps growing and reshaping itself,” she says.

Her artwork is among those from 15 first, second and third generation immigrant artists, representing 25 countries (everywhere from Mexico to Guyana and Hong Kong) that will appear in a new exhibition called Don’t Ask Me Where I’m From. Curated by Marianne Fenton and Marion Eele, it is a collaboration between the Aga Khan Museum and the Fondazione Imago Mundi, who wanted to further dialogue and understanding between international communities, especially during an era when immigration has been so demonised by populist politics.

Says Henry Kim, the Museum’s director and CEO, “Our ambition is to connect cultures through art. This exhibition reinforces our belief that culture is fluid and that it is possible to live free from nationalism – a perspective on the world that comes at a critical time.”

The diverse artworks explore and celebrate the impact and personal experiences of migration and cross-cultural lifestyles from those “who live between cultures”. Marija Nemčenko’s ‘No More Than Vodka & Kebabs’, for example, co-opts the visual language of advertising to explore stereotypes surrounding migration, along with the artist’s own identity. Meanwhile, Swiss-Syrian artist Houda Terjuman’s sculpture/painting installation The Road Less Taken is a miniature world highlighting various immigrant experiences, such as a minuscule boat carrying a palm tree.

“I feel the theme of migration should be embraced with the utmost attention and gravity,” says Luciano Benetton, the Chairman of Fondazione Imago Mundi Partnership, which has highlighted the work of 26,000 artists worldwide, and was conceived as an idea of art and a world without borders.

For Benetton, art is a powerful incubator of integration.  “Imago Mundi’s aim is to unite. Countries at peace and those at war, historically opposed and divided nations, communities and minorities: all are invited to join a dialogue in the name of art.”

“[Migrants] provide precious testament, in life as in art, to the magnitude of worlds that the world encompasses: traditions, cultures, passions, new ideas, ancient customs, and contradictions… if the civil and moral task of governments is to keep humanity safe, in exploring alternative pathways, art can succeed where politics is not enough.”

Adds the Museum’s Chairman of the Board, Prince Amyn Aga Khan, “It is almost as if migration brings out or strengthens the creativity of artists, perhaps as a way of communicating without words – without the words of the new language one has not yet learned or mastered.”

The exhibition initially opens at Imago Mundi’s Gallerie delle Prigioni (in picture) in Treviso, Italy on 27 November 2019, before travelling to the Aga Khan Museum in Toronto in March 2020. It will then travel to various venues across Canada, the US, Europe and the Middle East.