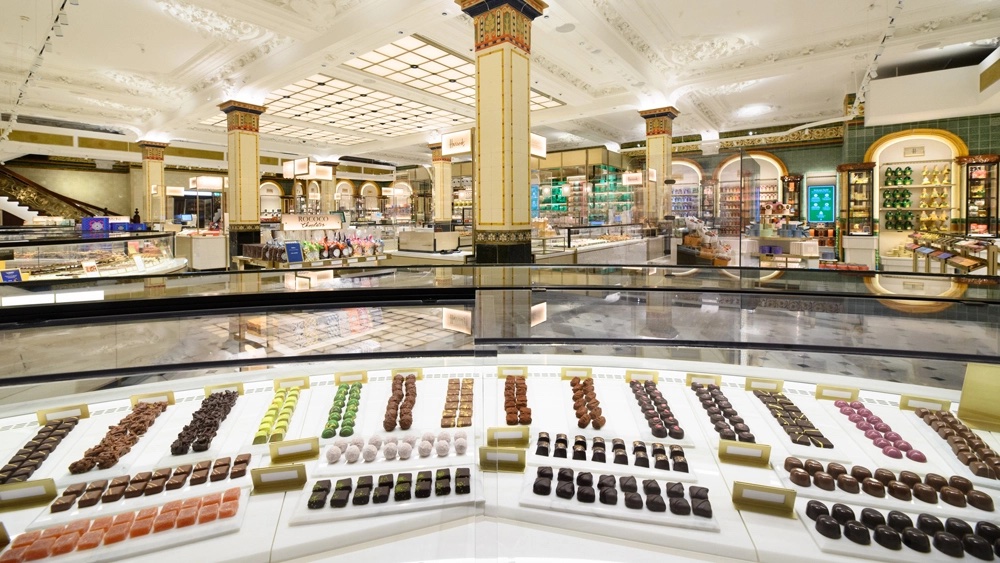 When Charles Henry Harrod coined his department store’s catchphrase in 1849, it is safe to assume that he did not foresee the consequences that would unfold 172 years later. Harrods’ motto – “Omnia Omnibus Ubique” – translates from the Latin, less catchily, as “all things for all people, everywhere.” As of last week, however, London’s most iconic department store is selling a single bar of chocolate for £350. Never has the intention to be inclusive been more exclusive.

Harrods is the only place in the UK where you can buy To’ak, reputed to be the world’s most expensive chocolate. The Ecuadorian brand is the headline (and headline-grabbing) act of the store’s revamped Chocolate Hall, which, with the easing of lockdown, has finally been unveiled to the public as part of Harrods’ £300 million refurbishment.

A hefty chunk of that sum has been lavished on polishing up Harrods’ four Edwardian food halls and repositioning them as a foodie destination for 21st-century Londoners, not just the tourists for whom a green and gold Harrods bag is as essential an emblem of the UK capital as a black cab and Big Ben.

The eye-watering £350 price tag—or mouth-watering, depending on your budget—for a 50 g bar of To’ak Guayasamin Art Series is the result of a three-year ageing process of one of the rarest varieties of the Ecuadorian Nacional cacao bean. The triangular chunks of dark chocolate, glossy as brown lacquer, are displayed in artful piles in locked glass cabinets that would not look out of place guarding the gems in Harrods’ Fine Jewellery Rooms.

Clearly, we are on a different planet of chocolate exploration here to M&M’s World. “Exclusivity is a key component for any kind of development we do,” admits the store’s head pastry chef, Alistair Birt, a former UK winner of the World Chocolate Masters contest. “It’s all about that only-at-Harrods vibe.” 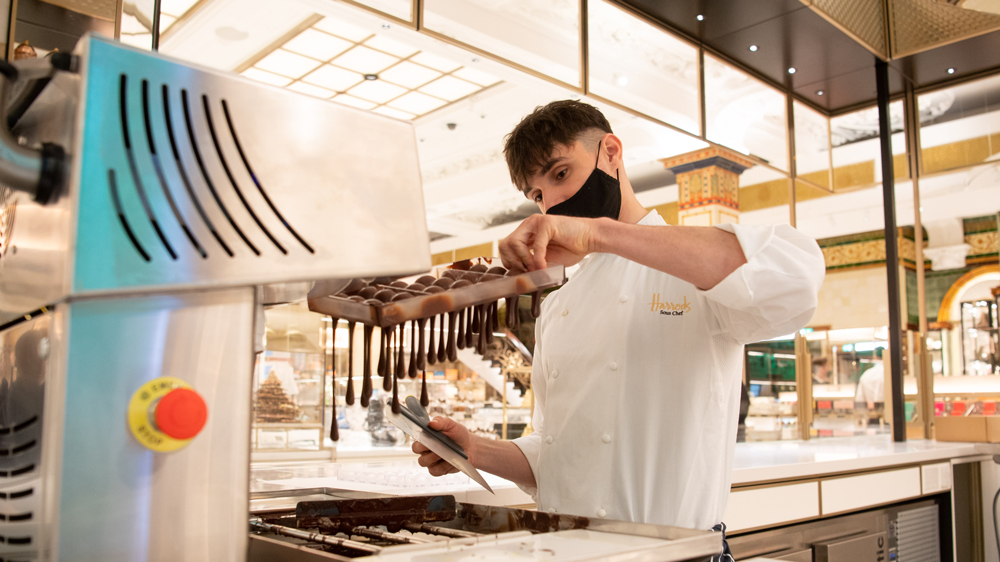 Chocolatiers will make your confections right in front of you. Photo: courtesy Harrods

The vibe of the Chocolate Hall is a cocoa-connoisseur’s dream. Next to To’ak, you will find Pump Street, which sells small-batch chocolates out of a 15th-century building in the picture-postcard village of Orford. If you buy only one thing in the Chocolate Hall, Birt says, make it Pump Street’s Sourdough & Sea Salt bar, which retails for a rather more reasonable £8 for 70 grams. Listen to what Birt says. Handmade by bakers on the Suffolk coast, this is chocolate which tastes as true an expression of terroir as the finest Burgundy.

All eyes, though, are on the Chocolaterie, a gleaming counter where Harrods’ brigade of 22 pastry chefs craft creations for the shop floor like real-life Willy Wonkas, albeit dressed more soberly in chef’s whites. “Retail theatre is something that Harrods is renowned for and is central to the Chocolate Hall,” André Lewis, Harrods’ head of food, drink and spirits, tells me. “The Chocolaterie allows us to showcase the craftsmanship and quality that goes into chocolate production at Harrods. Our pastry chefs make everything in full view, from our fresh bonbons and filled bars to chocolate dipped confit fruit and nuts.”

I watch mesmerised as a pastry chef pipes zigzags of peanut butter into a glistening oblong of barely set milk chocolate, which will be ready to be sold on the shelf in 24 hours. That’s some sales tool. Moments later I am unwrapping a Peanut Butter Bar on the spot, savouring a nutty flavour far richer than Reese’s and sharpened up with an adults-only bitter edge.

If all this sounds like a sea of brown that would drown Augustus Gloop, there are pops of color everywhere. Le Bonheur is another Harrods exclusive and the only concession outside Paris for a praline maker which, the sales assistant tells me, combines a Russian style of chocolate with the flavours of France: pistachio and basil, say, exquisitely wrapped in pastel-green paper the colour of a Hitchcock heroine’s suit.

One corner of the room is taken up with a wall of pick and mix from Turin’s Venchi, the red and gold foil glittering like Christmas. A pile of Harrods Gold Bars, made to the same recipe in Belgium for 24 years, glints like a vault in the Bank of England. Pink tubs of Harrods Chocolate Fruit & Nut Collection are elegantly tied with black ribbon like a hat box ready for Royal Ascot. 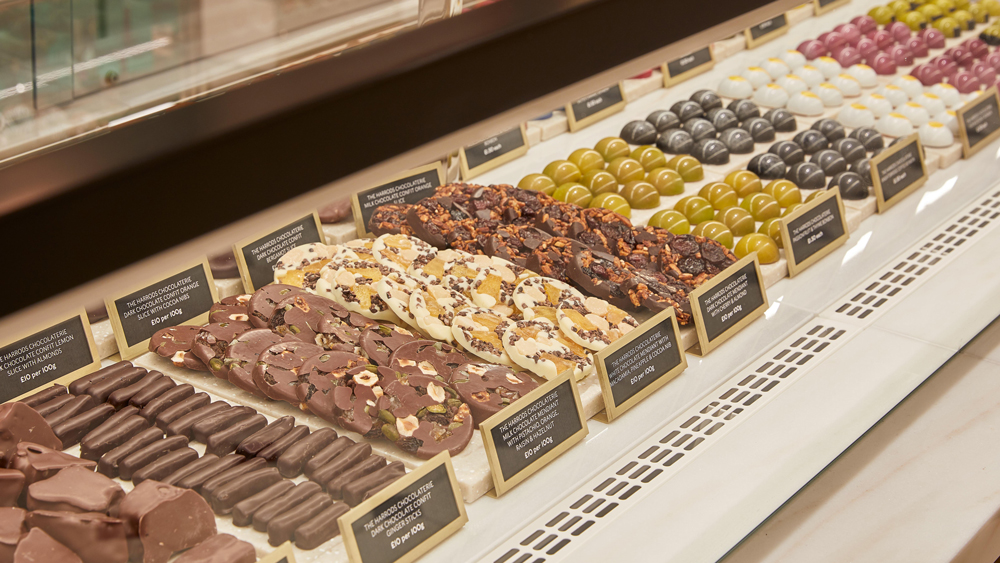 Treats as far as the eye can see. Photo: courtesy Harrods

Most colourful of all are the wall tiles that have been painstakingly restored by hand: an emerald-green leaf design here, an art nouveau-ish floral swirl there. A lightwell crafted from backlit alabaster in the centre of the ceiling pays homage to the former viewing gallery that was suspended above the original hall; these days the best way to get a sense of the scale of the 5,000-square-foot space is from the Edwardian staircase that curves down from ladies wear, its banister French-polished to a burnished sheen.

The Chocolate Hall is the fourth and final of Harrods’ food halls to be treated to a makeover by London-based David Collins Studio. Each room has it particular pleasures: espresso martinis, bespoke blends of tea and a bell announcing a fresh batch of croissants in The Roastery and Bake Hall; sausage rolls and Stilton and steak pies to heat at home in the Fresh Market Hall; and the most famous chefs in the country in the Dining Hall, where Vineet Bhatia’s Kama grills some of the best lamb chops in London.

Arguably, however, Harrods has saved the best until last with the Chocolate Hall. For those chocoholics whose budget does not stretch to £350, there are jumbo-sized chocolate coins for £6 that look a million dollars. There really are all things for all people here.