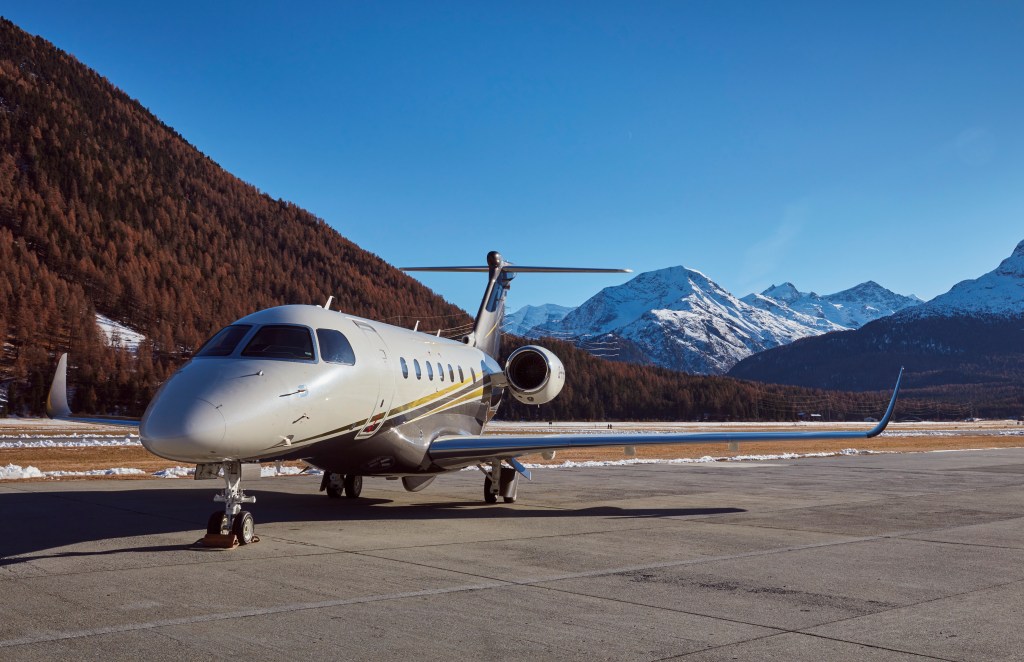 Flexjet’s quarter-of-a-century-plus history is one peppered with milestones: from its founding in 1995 as a venture of Bombardier Aerospace Group to its procurement of a UK operating certificate in 2016 via its acquisition in 2013 by Directional Aviation.

Tell us about the Praetor 600 we’re on today [pictured throughout]?
This particular aircraft only arrived from the manufacturer, Embraer a couple of weeks ago! It’s known in industry jargon as “super-midsize”, which means that its cabin is bigger than the average entry level private jet on the market, but it’s not an inter-continental style cabin – the nine passengers on board all sit together, there aren’t separate zones. But it has all the amenities of a luxury jet, including a galley for crew members to prepare hot meals and so on. We consider a high level of hospitality essential on our aircraft.

I gather the range is impressive?
It can fly a lot further – New York to London, Dubai to Dublin – than any competitors in its field. Up until recently, these routes were only available for people who were paying something like £50 million for  an aircraft. Now this is available in an aircraft that might be slightly smaller but has a lot of technology, a lot of power, and is only half the price.

It also has fly-by-wire technology, which is unusual for a private jet in this category. It has HEPA filtration meaning that all of the air in the cabin is constantly being refreshed. It has ultra-high-speed Wi-Fi connectivity, the fastest you could ever find. It basically has all the attributes of aircraft that are much bigger and much more expensive.

Are its post-pandemic credentials – such as that air circulation you mentioned – a stroke of good luck, given how long it would have been in development?
It’s really fortunate. The health benefits of private aviation have been studied for many years, and we were discussing them with the manufacturer for a long time before the pandemic. There was always an awareness that the relative lack of human contact, compared to travelling on a commercial airline, was a positive.

Also, travelling at a lower cabin altitude means passengers become less tired during the flight. The skin doesn’t dry out as much. Those aspects, we felt, were always really interesting and perhaps not marketed as much as they could be. The pandemic has just made the benefits of flying privately more obvious. We don’t take our health for granted in the same way that we used to.

What emerging technologies are going to impact private aviation the most profoundly?
The pressure to run an operation that is more sustainable is immense for us. Our customers feel that pressure too, and will continue to do so, because of the flight-shaming phenomenon and other similar activities. We’re a big company, not a small operator, so we have to take  responsibility to do what it takes in this area.

We’re in a position to influence manufacturers and the R&D departments behind their technological developments. We’re in a position to buy sustainable fuel at scale. We have a responsibility to influence the way our sector evolves and behaves. Leadership comes with responsibility. If companies like ours don’t embrace that, and assert that we’re going to do the right thing, then nobody else will. We feel we’ve done everything we potentially can for the moment. In terms of carbon off-setting, we’re compensating for our flights at 300 per cent. Customers can’t choose whether to subscribe to that – it’s built into our pricing. We obviously operate brand-new aircraft which is a different prospect environmentally to 20-year-old aircraft.

We’ve also looked very closely at sustainable aviation fuels, and offer customers an option to go beyond that 300 per cent figure. We also invest in the future of aviation – for example, our parent company Directional Aviation recently acquired London-based helicopter operator Halo Aviation. Directional is very involved in what the future of aviation looks like; our founder Kenneth Ricci is a passionate aviator and is convinced that aviation will become a lot more focussed on electrical aircraft and sustainability. He sees things like climate change and Covid not as the end of flying but the start of a different way of flying.

And we’ve just given a $1 million donation to The Smithsonian’s National Air and Space Museum “Thomas W. Haas We All Fly” gallery in Washington, which hopefully shows the commitment we have towards responsible aviation.

Are emerging, younger customers more insistent on such a commitment?
Yes. They don’t want us to just offer a carbon offset option that is voluntary. And, the 300 per cent figure is about recognising that carbon isn’t the only dangerous emission. There are aerosols and nitrogen oxides, and then there’s of course the noise caused by aviation. Doing things in a mandatory way is quite pioneering – most companies don’t dare, and just make it optional. It takes boldness to make responsibility more than just a marketing statement. I’m really hopeful that the younger generations see, and recognise, responsibility as an advantage. It’s our responsibility to lead the way.

What kind of Covid-related measures are currently in place, outside of the obvious stuff such as disinfecting interior surfaces and so on?
We ran a scheme called “Project Lift”, which was logistically very challenging to run worldwide at the start of the pandemic. It’s based on the idea that, we can neutralise and sanitise cabins, but if our crew have flown in on commercial planes before starting their rota, that wouldn’t be effective. So we decided to minimise their touchpoints before coming into contact with passengers in our cabins by creating pick-up hubs – especially in the USA, because of scale there. We segregated part of our entry-level fleet in the US to become a shuttle service to bring them from their places of residence to the point of their departure flights. That was pretty pioneering, and cost us millions, but it was something further we could do to protect employees and passengers.

What do you think the pandemic’s implications are for aviation more broadly speaking?

Sadly, the commercial airlines are behind the private jet sector when it comes to recovery, and I think it’s going to take them years to bring back full schedules, if we ever see them again. That means they’re going to have to optimise the occupancy of aircraft a lot more: whereas they had 20 flights a day to Geneva they’re going to have one or two, which I think will lead to a decline in high-end service. I don’t say this with any joy – the crisis has badly affected very good pilots and other good aviation staff.

It’s good to see though that private aviation has seen a much stronger rebound, and it’s because we exist to offer certain clientele things commercial airlines can’t offer any more: freedom in scheduling, the ability to fly directly to destinations, less time wasted on the ground and also a level of service, an experience, that cannot be delivered by the commercial airlines anymore. This is as much of a watershed moment for aviation as 9/11 was: people who have been thinking about switching over the private aviation for years will see this, with additional congestion at airports and so on, as the time to do so.