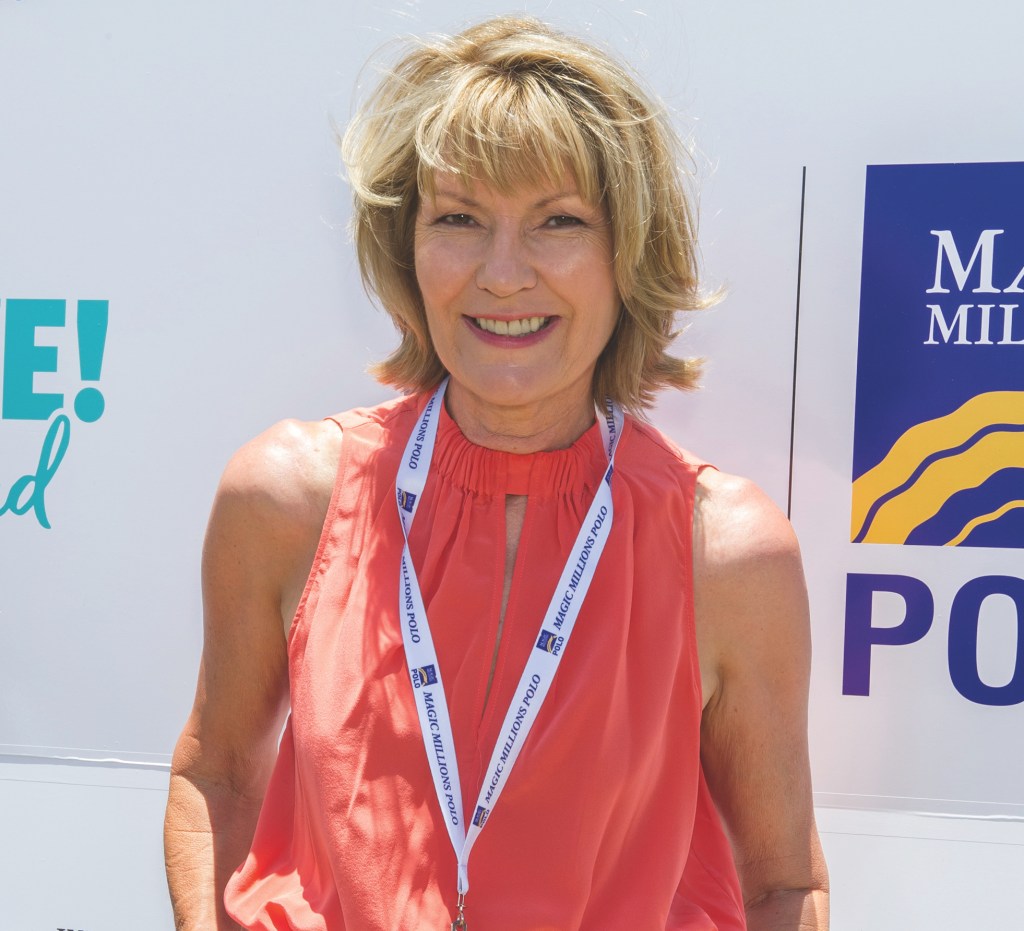 As CEO of Harvey Norman Holdings, with more than 280 company-owned and franchised stores in eight countries, Katie Page is the queen of retail. It’s probably fair to say, though, that Page is as passionate about horses as white goods and furniture. Page’s husband, Gerry Harvey, executive chairman of Harvey Norman, owns Baramul Stud, one of the world’s largest thoroughbred enterprises and, with Page, the annual Magic Millions Sales and Raceday on the Gold Coast, on which Page has bestowed an international profile. Raised in rural Queensland, the youngest of four girls (and encouraged by her bank manager father to read the business pages of the newspaper every day), Page is also deeply committed to gender equality. She is a leading corporate sponsor of women in sport and epitomises the maxim “who dares, wins”.

Horses, what do you love about them?

That is a bit like asking someone who loves the water why they love the water, which I do. For as long as I can remember – paddock riding as a child – I have loved horses. My family is surrounded by horses in many different arenas, from Magic Millions to Gerry’s stud operations to our daughter’s career in show-jumping. If you have horses in your life you also have horse people. If you have horses in common you tend to find kindred spirits.

Is there one that has left an indelible impression?

Global Glamour was bought as a yearling at Magic Millions in 2015 for $65,000 by a syndicate of more than 40 women. She has won over $1.2 million, but the syndicate owners have had the most amazing experiences together as a result of owning her, which almost surpasses the prize-money thrill. She won a Group One race in 2016 – and from Kentucky to Paris they were cheering their ‘girl’ on to victory. Global Glamour was bought as part of the Magic Millions Racing Women initiative, which entitles any all-female owned yearlings bought from Magic Millions [sales] to be in the running for a bonus $500,000 in the Magic Millions 2YO Classic.

What do the Magic Millions mean to you and Gerry?

Magic Millions is a family business and to us, family is everything. When we bought Magic Millions more than 15 years ago, it was all potential and opportunity. We loved all the elements: the horses, the people, summer on Queensland’s Gold Coast. It has changed and grown beyond our expectations. The Magic Millions was the first race day in Australia to offer $10 million in prize money from just one day’s racing … Only horses bought through Magic Millions are eligible to qualify for our race day. So the lure of a million-dollar return on investment has seen our buying bench grow exponentially. In 2018, yearling sales grossed over $150 million. The June National Sale also recently topped $140m in thoroughbred yearling sales. We introduced Magic Millions Polo and it, too, was a fantastic success … Gerry and I never get complacent. We are always thinking about what’s next.

What is your greatest indulgence, your idea of luxury?

High-end luxury property development. I love design. I love modern architecture. My most recent project is right on the Gold Coast’s Main Beach – M3565 – an eight-level boutique luxury building. It has six whole-floor apartments and one two-level penthouse. It was designed by award-winning architect Virginia Kerridge with lots of natural timbers, raw tinted concrete and zinc. It is the first major development on the beachfront at Main Beach in more than 30 years.

I don’t get a lot of spare time, so when I do, I want to be with my family – on the beach in Queensland with Gerry, hiking in Bhutan with my sisters or skiing in America with my kids.

To what extent do you follow your gut instincts in business? Where has that best paid off?

The more I experience in life, the better my gut instincts have become – in every facet of life: family, community, you name it. The establishment of the Magic Millions Racing Women’s initiative was a gut-instinct decision that has worked beyond all expectations. Every year I would meet women who are informed, savvy and passionate about horses – yet the majority of ownership was in their husbands’ names. I thought if we built in an incentive that was women-only, it might awaken the sleeping giant. And it did. Since inception in 2013, more than 600 horses have been bought as part of the program.

What still gives you a thrill?

Seeing women succeed against the odds – in sport, in business, in life.

50 Cent gives us the skinny on his latest projects.