By four years old, he was selling child-friendly commodities to his classmates (think tadpoles and Tamagotchi); by the time he was a teenager, his parents let him babysit their businesses (his father owned a shoe manufacturer in southern Africa, his mother ran a chain of Indian clothes shops) when they travelled.

By 23, Ameerh Naran was busily setting up his own private jet company – a venture, now named Vimana Private Jets, which deals with aviation requests for clients including billionaires, politicians and celebrities.

Often, the requests Naran gets are unusual – he once helped Emmerson Mnangagwa, Zimbabwe’s then-vice president, escape the wrath of Robert Mugabe with a medical evacuation –  but mostly the company fulfils a growing demand for large airliners that would usually be configured for 100-plus passengers, instead configured for just 18 or so passengers so they have the layout and mod-cons of a superyacht.

What business lessons do you recall learning from your parents at a young age?
Never be afraid to ask for what you want. The worst that can happen is that you get a “no” –  in which case find another way of getting what you want. Whether it’s a bank loan or a solution to make a manufacturing process more efficient, you can always get the result you want. Perseverance and gumption is everything.

What are your recollections of taking over their business when they went away?
It felt completely natural as I had gone to my parents’ businesses after school since I was a baby. As a child I used to walk through my dad’s factories and every worker (200 at one of them) would greet me as Mr Naran Junior, and would often tell me that they look forward to me being their boss one day. I therefore took it as a given that I would periodically run my parents’ businesses at times, although I knew I wanted to one day create my own as opposed take over my parents’ businesses. 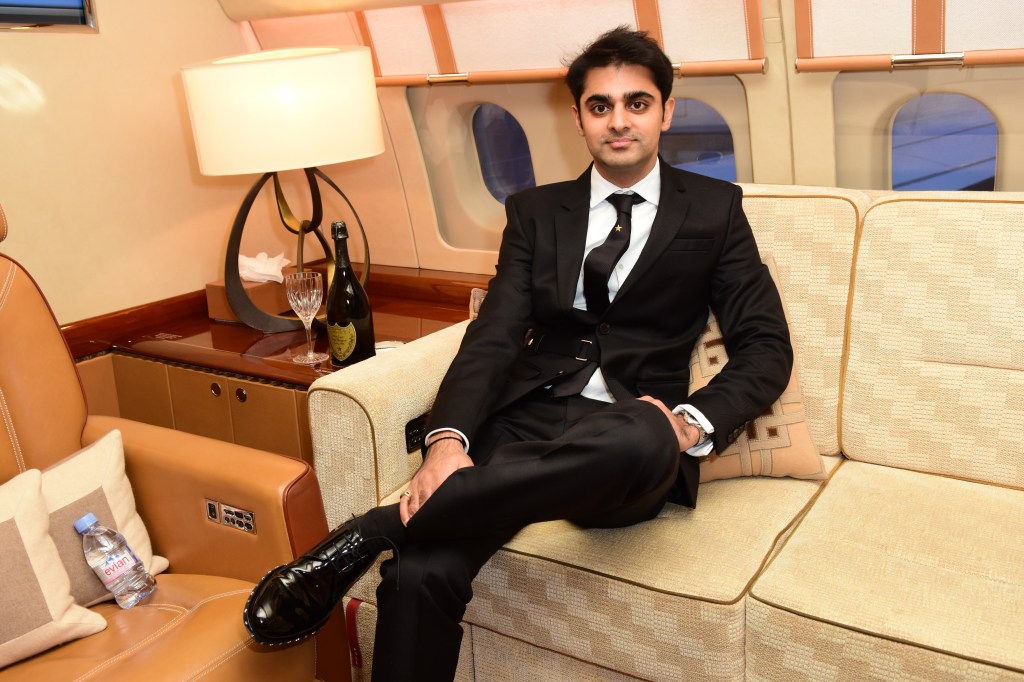 Ameerh Naran, aboard the Airbus Corporate Jet also pictured above

Was there a catalyst moment that led you to where you are now?
I feel success in business is more about persistence than a prodigious moment. I had a lot of unsuccessful attempts at business but continued trying until deals eventually came to fruition. Some of my attempted business deals landed me in scary, life-threatening situations. I attempted to buy gold at massively discounted rates in Zambia when I was 20 years old. I was able to get finance to the tune of around US$20m to finance the transaction only to discover that, despite having verified the certificates and export documents with the Zambian Ministry of Mines, the sale was a scam and the gold was really another metal plated in gold. The sellers were armed and if I hadn’t managed to get myself and business associates out of the country on discovering it was a fraud, we could have been put in a horrifying position.

Any big take aways from that?
These negative experiences taught me to be less naive and more cautious – in business as in life, you come across people who have a bad moral compass: however, this did not deter me from future business attempts. When starting in private aviation, I was able to get the first booking fairly easily, but then for the next twelve months I didn’t get a single booking. I would wake up at 6am, go through all the Forbes and Fortune rich lists reaching out to each company or individual asking them whether I could quote on their charter requirements.

What do people want/expect out of private air travel, and is it changing?
I feel UHNWI still expect private travel to be a fast, flexible and comfortable means by which to travel; however, a requirement we are seeing more of from clients is that the aircraft be VVIP configured airliners with a dedicated stateroom and ensuite bathroom with shower on flights longer than 5hrs. They seem to prefer the space afforded to them on VIP airliners, and like to be able to treat the aircraft like a flying hotel – and it having showered and dressed appropriately for wherever they’re going.

Do you feel that the definition of luxury – in a broader sense – changes between generations?
I feel the core essence of luxury will always be the same irrespective of generation – and that is an object or experience that puts a smile on one’s face. What stimulates that differs between generations, educational backgrounds, regions and cultures. I don’t feel you can generalise a trend in luxury for Gen-Z – but I do feel there’s a strong tendency towards luxury being associated with spirituality and opulence being disguised as being natural, and being dissociated with materialism.

This can be seen with the growth of holiday resorts designed to look and feel as they were hand-made out of natural materials without an intentional design element. At the other end of the spectrum there’s still a less discrete consumer who associates luxury with ostentation and status. I feel all forms of luxury should be celebrated, and am disappointed when supporters of one judge the other – luxury experiences or objects make for happier people, which in turn results in a happy society.

What is your personal definition of luxury?
For me luxury is an object or event that facilitates or evokes positive emotion. Whether it be ecstasy brought about through the acceleration and roar of a supercar or the sense of tranquillity brought about by staring at beautiful art whilst sipping on Da Hong Pao tea, sat on a sumptuous Loro Piana-upholstered divan on an Airbus Corporate Jet. I also associate luxury with time: the time taken to hone a skill in addition to the time taken to then build an object or create a luxury service.

What’s next for you?
My primary focus at the moment is to start of my own supercar company. I also plan to get behind the wheel and start racing cars again soon.