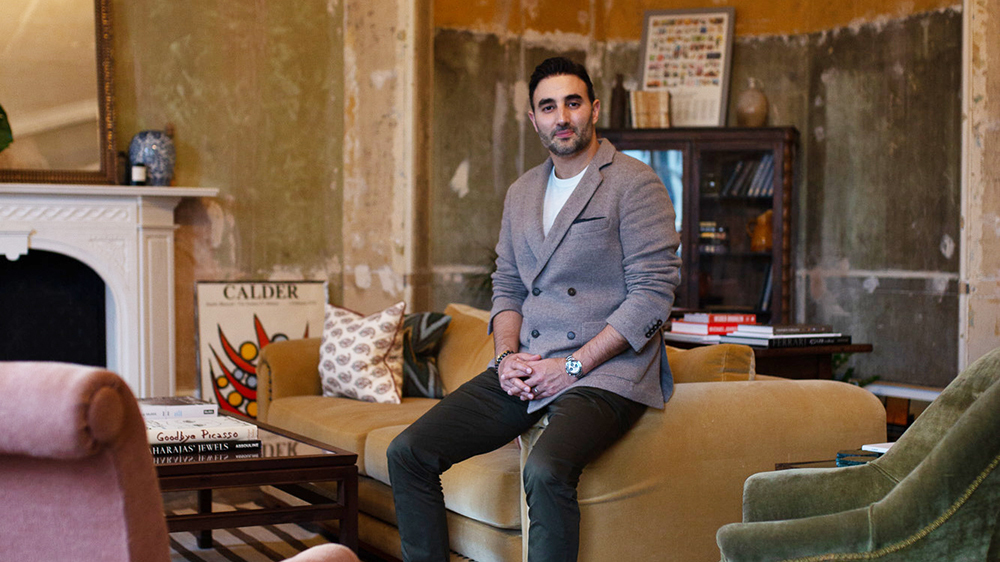 As the boundaries between work, leisure and travel gradually erode, the formerly distinct categories of hotel, restaurant, retail, members’ club, home and office blend and blur. No one understands this better than Sharan Pasricha, the 39-year-old founder of hospitality group Ennismore, which owns the urban-chic Hoxton hotel chain, the tartan-luxe Gleneagles golf resort, a clutch of London restaurants, a brace of co-working spaces and NoCo, a new foray into budget hotels.

Pasricha lives the lifestyle of his brand, constantly shuttling around his growing empire, which stretches from Paris to Portland, Oregon. The Indian-born British entrepreneur purchased the original Hoxton hotel in London in 2012 and has turned it into a global enterprise, recently opening its ninth location, in Los Angeles. His next project is to transform the grandiose Bank of Scotland HQ in Edinburgh into Gleneagles’ first urban outpost.

What, apart from more time, would make the biggest difference to your life?

What apps do you use the most?

I’m not really on social media, but I spend a lot of time on Workplace from Facebook. Most of our 3,000 people are not in front of a computer, so we communicate internally using chat and livestreams on our phones. It’s been a revelation.

What advice do you wish you’d followed?

Don’t take work home—as my wife continues to remind me—which is tough when my factory is open 24/7.

What do you do that’s still analog?

I love vintage watches, such as the Daytona Paul Newman I’m wearing. I collect them because I enjoy wearing and learning about them, not to resell them.

The most recent thing you regret not buying?

A couple of years ago I was offered an artwork by Yoshitomo Nara. One of his pieces was up for auction at Christie’s in Hong Kong for eight figures, which is a lot more than I was offered it for.

What in your wardrobe do you wear most often?

What song is currently in your head?

I recently got back from a friend’s 40th in Ibiza, and Hausch, by Andhim, has not left my head since.

What’s the most impressive dish you cook?

I’m definitely not a cook. Though at uni I would make a mean omelet at three am after a night out.

If you could learn a new skill, what would it be?

I would love to learn Italian. I have a fantasy that one day I’ll have my own vineyard and chat to the local winemakers about the grape season.

Where do you get your clothes?

I rarely go to shops, but I buy from Mr. Porter—I like Thom Sweeney and James Perse.

How much do you trust your gut instinct?

Too much, sometimes. I have no training in hospitality, so it’s all intuition. Now we have thousands of employees. It has become a science as much as an art. But you still have to feel things in the pit of your stomach—no spreadsheet can change that.

What’s your favorite seat on a plane?

Short haul, I like the emergency-exit window seat for the legroom, though you can’t recline. Long haul, I go for a window seat, facing forward, as far up the plane as possible. I only ever travel with carry-on luggage, so I really have to think about packing.

What is your e-mail etiquette?

You have to respond within 24 hours. I have two assistants who make sure we keep up. In my early years on the hustle, I wrote to hundreds of people and rarely got replies, so I value the importance of getting back to people.

What’s always in your hand luggage?

The new AirPods Pro and a portable charger. I cannot leave without them.

What car(s) are you most attached to?

I have always owned a Tesla. They’re saving the world one supercar at a time.

What’s worth paying for?

For me and our family it’s experiences, whether it’s going to the rain forest to walk with gorillas or to Tanzania, where we went over Christmas, on safari.

If you could be anywhere in the world right now, where would you be?

I’d be at home hanging out with my wife, the kids and the dog.

The Loudest Voice, about the head of Fox News. It was mind-blowing.

First thing you do in the morning?

Press the snooze button, then make an espresso, then hit the gym.

What’s your most treasured possession?

Probably the cards that my kids have written me. My wife created a folder of them, and I keep it by my bedside.

What’s your favorite neighbourhood in your favourite city?

We live in Notting Hill and love hanging out there. The kids go to school there. We like the local cafés and shops. It’s one of the last few villages in London.

What causes are important to you?

We’ve adopted a local charity called Shelter From the Storm, which tackles homelessness. It’s such an important issue in all the neighborhoods we work in.

I have a sweet tooth. A friend brought round some six-foot slabs of Swiss chocolates the other day, so when you’re lying around the house, you break off a foot at a time. There’s no upside to that.

Where do you get your news?

On my phone. I use the BBC, FT and Times apps.