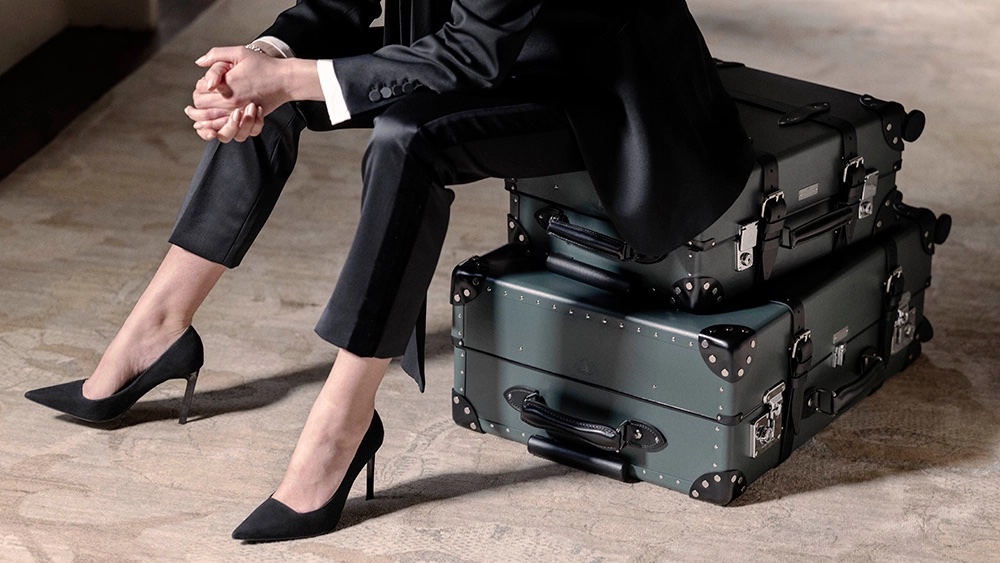 Vicente Castellano had his eye on Globe-Trotter for five years, steadfastly hunting the pedigreed British luggage maker until he finally made his catch. Oakley Capital, the private equity firm where he serves as operating partner, acquired the company in late 2019 and Castellano was installed as Globe-Trotter’s executive chairman in March of last year. The champagne buzz had barely worn off when Covid-19 brought the party to a screeching halt. Within weeks of taking control of his dream brand—one whose stock-in-trade is the glamour of jet-setting—the world went into lockdown and international travel was indefinitely put on hold.

Business was tough across the board in 2020, particularly for any company already trying to regain its footing. But reinvigorating a brand that accessorises luxury travellers? 2020 could have been a death sentence. Castellano, a Spanish businessman who’s been working in fashion for some 20 years, wasn’t going to let his hard-won victory be deflated by a global pandemic. With a combination of faith and business savvy, he galvanized Globe-Trotter; by the first two months of 2021, the brand was out-performing its pre-pandemic sales figures. Travel may still be on hold, but Globe-Trotter hasn’t stopped selling the dream. 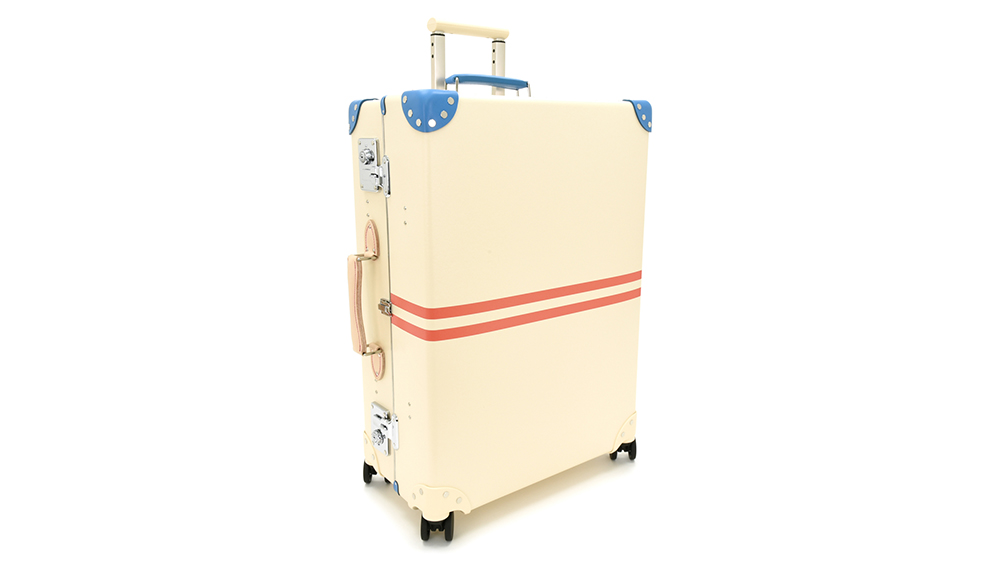 According to NPD Group, a market research firm, luggage sales declined 40 percent last year. “Luggage had been a bright spot in the overall accessories market prior to the pandemic,” says Beth Goldstein, NPD’s footwear and accessories analyst. “Interest in travel and experiences had grown and the industry received an infusion of innovation.” Instagram favourite Away had a stunning $1.4 billion (just over £1 billion) valuation in 2019, only to see sales plummet 90 percent in April 2020. After Covid-19 hit, Goldstein says, “There aren’t many categories that saw as stark of a decline in sales.”

Second thoughts about getting into the luggage game would be understandable. But rather than pull out of the acquisition, or even negotiate a better price, Castellano and his team at Oakley Capital remained bullish about their purchase.

“If we felt this was a very good deal in terms of the potential of the brand, it’s still a very good deal if we miss a year,” Castellano says, noting that Globe-Trotter has endured more than a century of fluctuating markets, tastes and trends. “The fundamental reasons why we wanted to buy the brand didn’t change.” 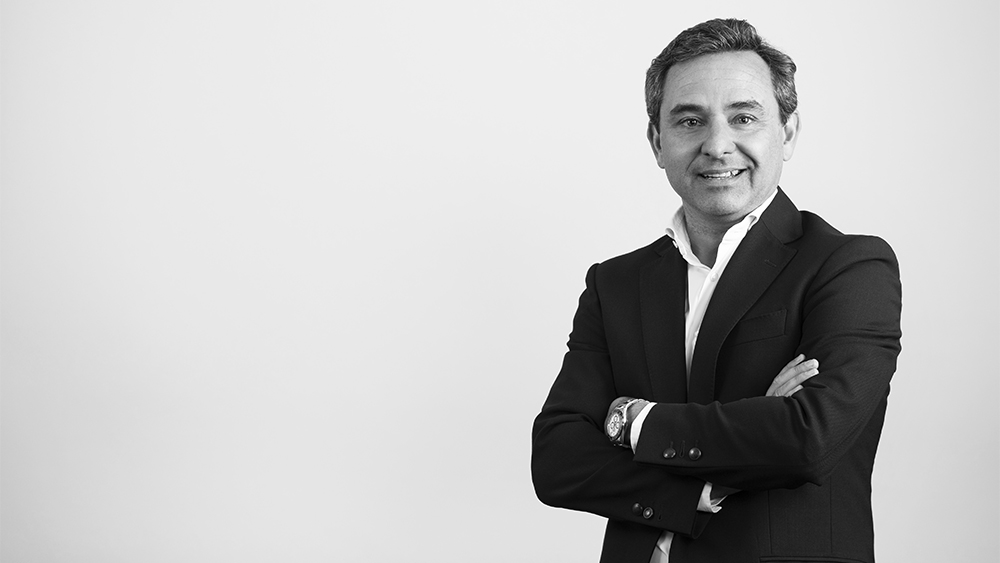 But, as Goldstein notes, luggage’s pre-pandemic highs were riding a wave of technological innovation: GPS trackers, digital locks, built-in USB chargers. Globe-Trotter’s design remains essentially unchanged from the Victorian era when it was first conceived. What place is there for riveted, leather-strapped trunks in a world of polycarbonate carry-ons with Bluetooth apps? Castellano, who estimates that he spends two-thirds of an average year on the road, isn’t too concerned.

“I’ve had that backpack with solar panels, I’ve tried the suitcase with a USB charger, all these things,” he says. “It’s fun the first few weeks but, in the end, it’s not something you use.” As a frequent flier, he was first drawn to Globe-Trotter’s fad-defying look—something that stands out from the homogeneity on most baggage carousels. “You buy a Globe-Trotter because it’s beautiful and will last forever.”

Beyond its good looks, Globe-Trotter’s design was originally a piece of cutting-edge performance gear. Founded in Germany in 1897 by a British ex-pat, the brand’s lightweight vulcanised fibreboard was a technical breakthrough. Unlike the clunky trunks of the time, Globe-Trotter’s wares took the schlepping out of travel while ensconcing precious cargo in an ultra-durable, hard-cased shell. To prove this point, in 1912 the brand tapped an elephant from Hamburg’s Zoological Gardens to stand atop a suitcase for a catalog. 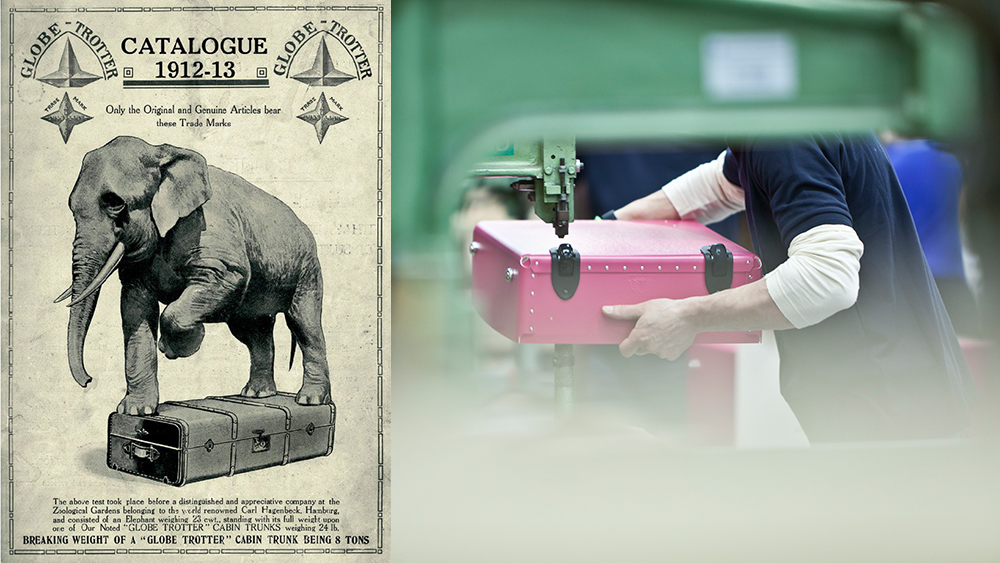 A 1912 advertisement; a suitcase in progress at the brand’s UK headquarters. Globe-Trotter

In 1930, the brand moved its operations to the UK, where everything is still produced using many of the original hand-crafted methods. Since then, it has lived up to its tagline as “The World’s Most Famous Suitcase,” being carried by everyone from Winston Churchill to James Bond. Sir Edmund Hillary packed Globe-Trotter bags to summit Mount Everest; Queen Elizabeth II was gifted a suitcase for her wedding that she still carries today. The brand’s enduring appeal has seen its luggage-making prowess enlisted by such venerable houses as Gucci and Berluti—even Comme des Garçons.

“I don’t really have to convince anyone that it’s a nice suitcase,” Castellano says, pointing out that Globe-Trotter’s style speaks for itself. “What we were missing on top of that was ‘And it’s as practical as all the rest.’ For people who travel a lot, like me, four wheels is really a must.” So, over the past year, when business was effectively at a standstill, Castellano focused Globe-Trotter’s engineering expertise on filling this gap. The brand’s first four-wheel trolley, in both carry-on and checked bag sizes, debuted in February—fuelling sales that bested pre-pandemic figures by some 40 percent. 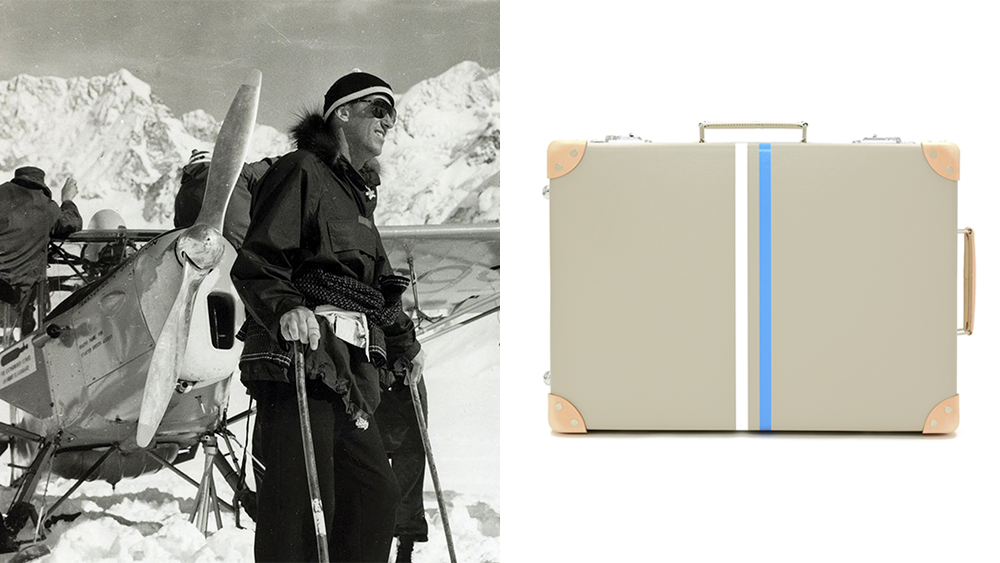 This isn’t the first time that Castellano has given a heritage brand a new lease on life. After building Pepe Jeans into one of the most popular denim brands globally, he led Pepe’s acquisition of Hackett and became the company’s CEO. “The challenge was to build a brand that is so quintessentially British without being so British that no one else would understand,” Castellano says.

Castellano harnessed Hackett’s posh Sloane Ranger DNA and turned it into a global currency. When he left the brand in 2017, after selling to a subsidiary of LVMH, Hackett was doing approximately £145 million in annual sales—about ten times what it was when he first joined. That knack for capitalising on British heritage while speaking to an international audience makes him particularly well-suited to navigating Globe-Trotter’s next chapter.

The pandemic’s restrictions proved to be fruitful for R&D, with Castellano turning his attention to diversifying the product range. “When you are in the super crazy day-to-day, you don’t have much time to really focus on ‘Where do we want to go? Who do we want to be?’” he reflects, saying that having his first year transpire in lockdown was “quite a luxury that you don’t normally have.” 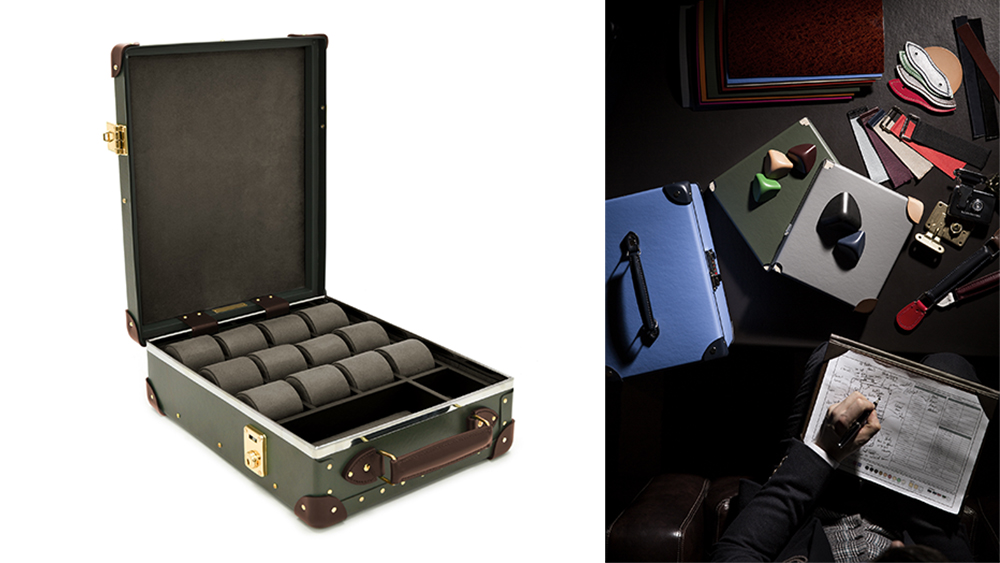 One of the recently introduced watch cases (£1,975); behind the scenes of Globe-Trotter’s bespoke service. Globe-Trotter

In addition to developing the four-wheel trolley, which offers the utility of Rimowa with a refinement more akin to Louis Vuitton or Hermès, Castellano introduced watch cases, attachés and scaled-down vanity cases that can serve as a woman’s handbag. Hearing that some homebound customers had repurposed their Globe-Trotter luggage as functional pieces of home décor, Castellano also developed a series of storage cases. Produced in collaboration with knitwear designer Bella Freud, daughter of Lucian, the first run of storage boxes promptly sold out.

Other recent collaborations include a limited-edition British Airways trolley and a range that features in the forthcoming Bond film No Time to Die. Castellano sees such partnerships as essential for keeping Globe-Trotter novel. It’s a significant challenge for any luggage brand, especially one that prides itself on timelessness. According to NPD research, the average consumer only buys suitcases every eight-to-ten years. 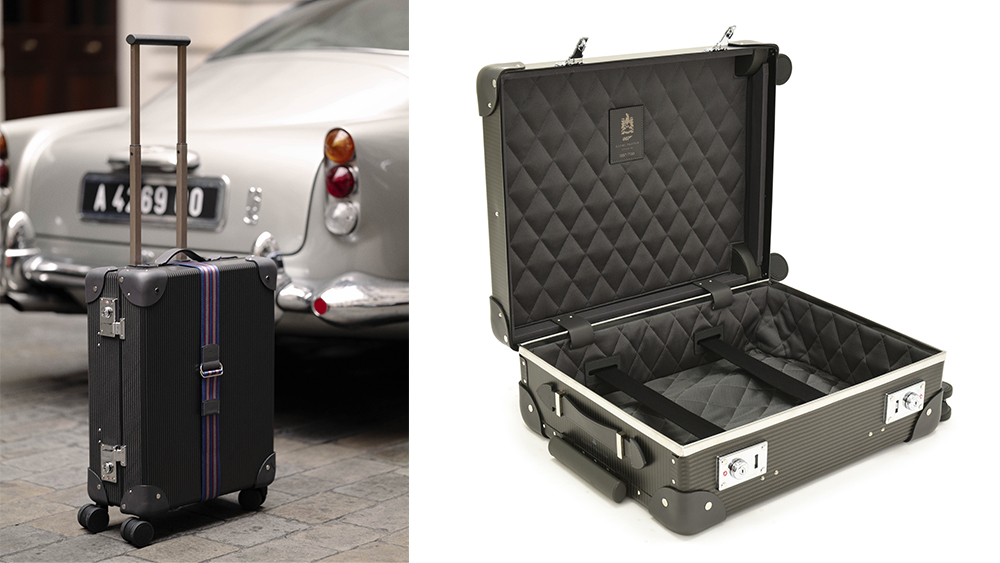 In a further bid to keep customers tuning in, Castellano is developing a Globe-Trotter member’s club. “I truly believe that people who carry Globe-Trotter luggage are special. They all share, to some degree, a level of taste,” he says. His plans include offering access to exclusive products and deals, travel advisory services and a travel guide sourced by the club’s discerning clientele.

While the club has yet to launch, Castellano’s efforts have already been a boon to Globe-Trotter’s business. Recent product introductions have driven a remarkable rebound from last year’s losses, and it’s not just a case of vaccinated shoppers hopeful about trips on the horizon.

Goldstein says that, while “pent-up demand” for travel is palpable, a recent NPD survey found that 25 percent of respondents anticipate their next leisure travel in 7-to-12 months and another 25 percent said they planned to get back on the road in a year or more. Discussing the luggage industry at large, Goldstein says, “The return to pre-pandemic travel levels will be slow.” Globe-Trotter’s success, then, is something of an anomaly. 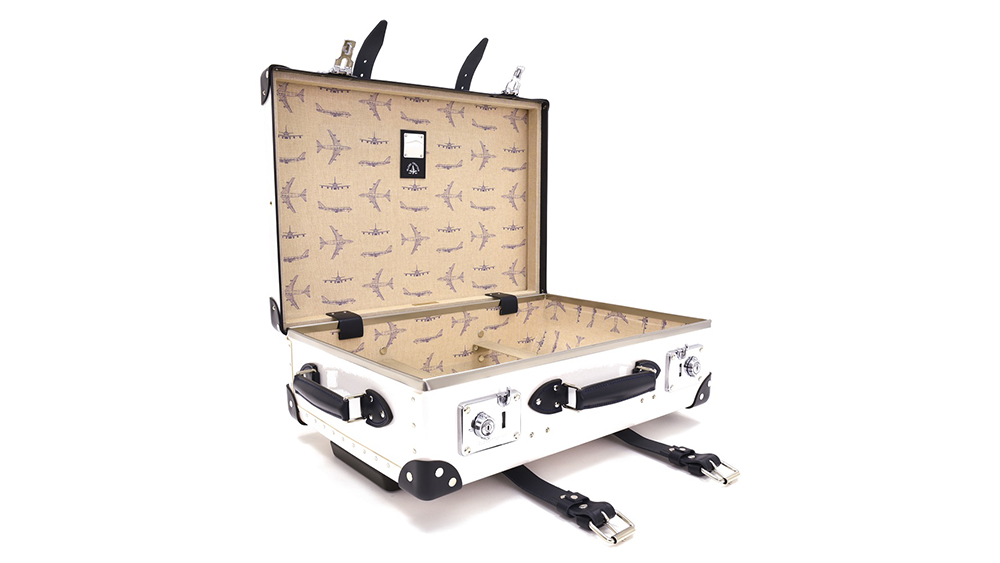 Inside the suitcase created with British Airways to commemorate the retirement of the 747 (£1,935). Globe-Trotter

Castellano thinks it might have something to do with the brand’s discreet breed of luxury and timeless style. Those attributes make it very much in line with most shoppers’ current mood. Lasting value is, for many, out-weighing hype. Globe-Trotter has a robust repair service—Castellano shares that they’ve recently rehabbed some 60-year-old suitcases first gifted for going off to boarding school—which ensures that the brand’s products are investments with lifelong returns.

He equates it with the mindset of watch collectors, trading up from Timex to Rolex. “Instead of buying another shitty watch, I’m going to buy a nice one that better represents me and will stay with me for the next 50 years,” Castellano says. “That’s real sustainability.” And, certainly as far as luggage goes, that’s real luxury.