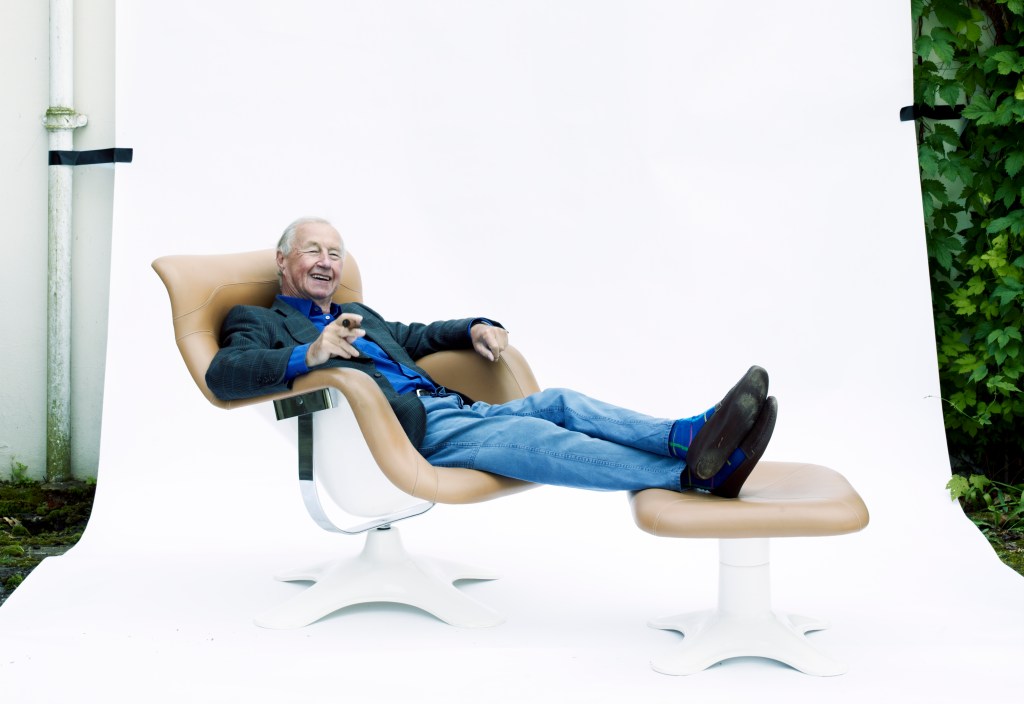 The finer brushstrokes of Conran’s work ethic really began to appear on the canvas when, having left Central School of Arts and Crafts at the age of 19 to work for architect Dennis Lennon, he set up a furniture design, ceramics and fabric workshop in the East End. “I think the moment you begin taking on staff and, with that, the responsibility for finding work to keep your team busy, paying wages and paying tax is a milestone in itself. It sharpens the senses and forces you to make serious considerations. I now had to define my objectives and target the sort of customers I was aiming to sell my furniture to, which meant creating the sort of furniture they might buy. It was a coming of age of sorts.”

By the time his company’s offices were moved to Hanway Place, just behind the corner of Oxford Street and Tottenham Court Road, in the early 1960s – “quite a pivotal moment for me” – some of Conran’s more maverick tendencies were coming to fruition. In the mid-1950s he’d been ejected from the Royal Society of Industrial Artists for distributing a marketing newsletter, which was considered a breach of rules concerning members competing with each other (“Can you imagine a company today not being allowed to promote themselves commercially in the marketplace? They would be out of business before they even began,” he says). 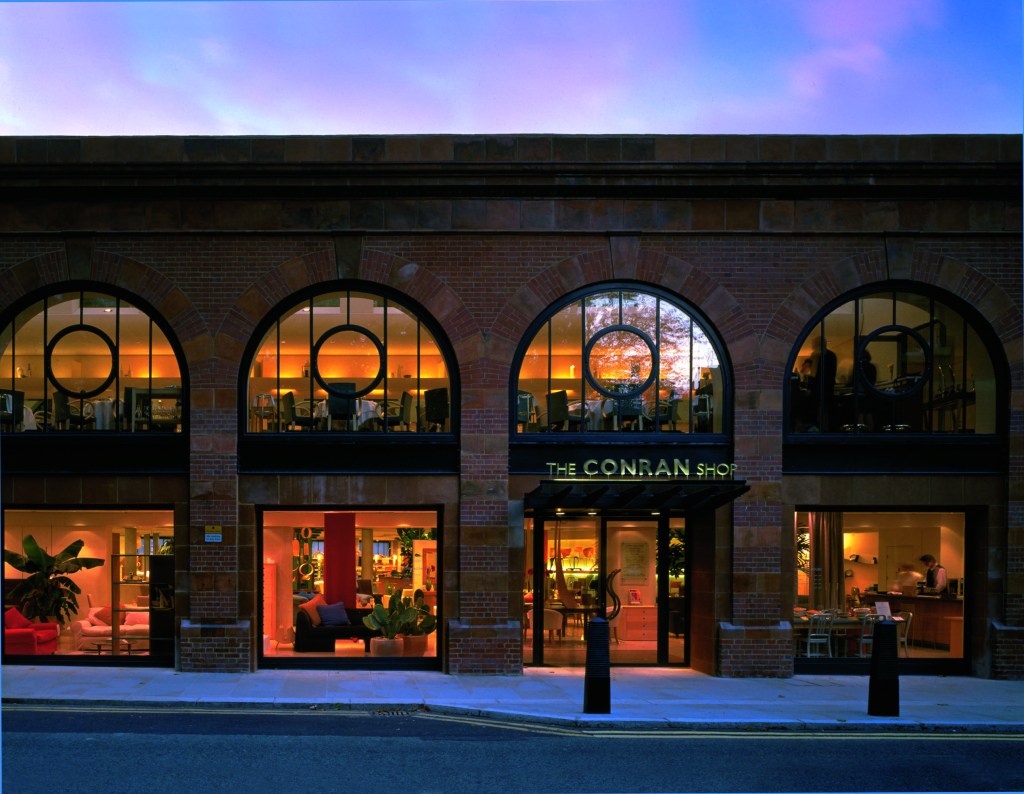 Perhaps the real landmark even in Conran’s career to date, though, is his founding of Habitat in 1964 with his third wife Caroline Herbert. Now in his 30s, and thus still a relatively young designer with fire in his belly, he had properly honed the trait which made him three-dimensional as an entrepreneur and an innovator: a profound understanding of consumer psychology. “I acted on a powerful instinct that people can only buy what they’re offered, and often they do not know what they want before it is put right in front of their noses,” he explains. “Britain was a particularly grey and austere country in the years after the war – the seeds of a better life were being sewn in the fifties, but they wouldn’t bloom until a decade later. Anything that was good in England at that time was out of reach for ordinary people.”

Conran implies that he and his professional partners at this time could almost smell opportunities burning away, unexploited, around this time. “I knew there was an opportunity for a revolution in the way things were sold – to create something that was more than just a shop selling furniture – and if the powers that be wouldn’t sell our ideas, then we would sell them ourselves. And so began my Habitat experiment, partly out of that sense of frustration but also out of a passionate conviction that a better style of life should be more widely available.”

The same sixth sense for consumer appetites kicked in again when Conran, in his capacity as Chairman of Hepworth’s menswear in Leeds, bought a chain of 80 menswear shops called Kendalls in 1982 – “a fairly dreary, run-down business” – and named it ‘Next’. “The Hepworth directors up in Leeds absolutely hated the name. We both commissioned market research, a practice I have always mistrusted – I feel it can only tell you what people already like and not what they might like.” Seven years of growth followed. 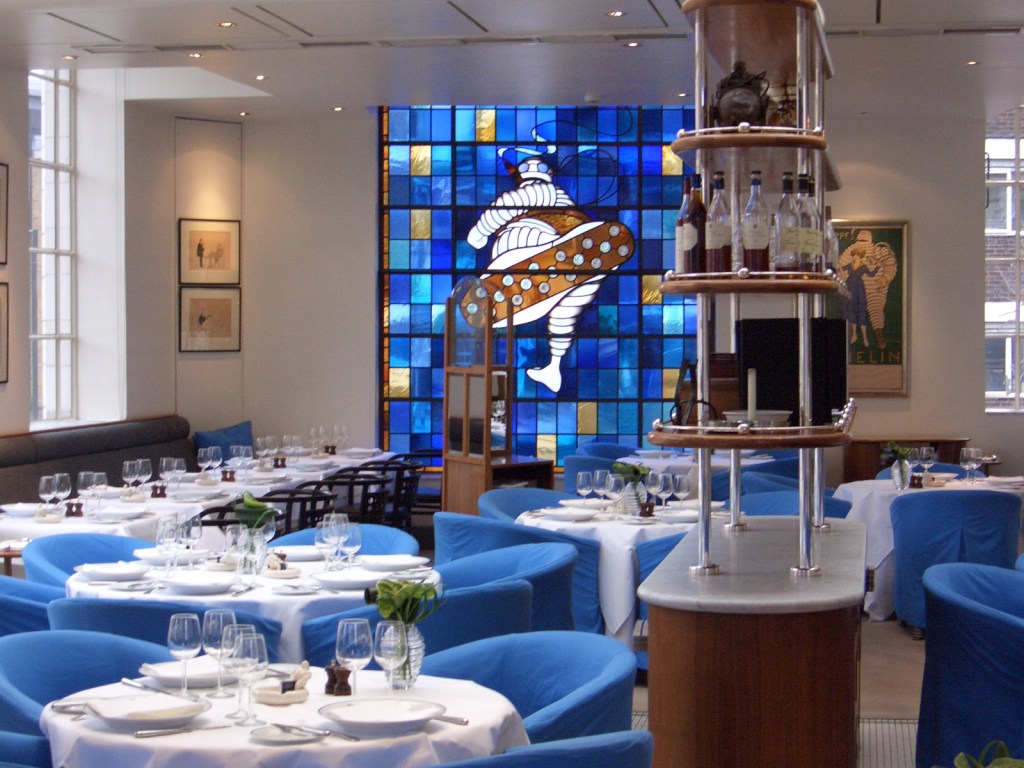 The high points of Conran’s career between his being knighted in 1983 and being made a Royal Companion of Honour by the Queen in February are too numerous to list. His role in the regeneration of the Shad Thames area of East London in the early 1990s, including the opening of the Design Museum (which he opened, tellingly, “to encourage this country to become a workshop again”), would be up there; so might the building of a restaurant portfolio including Soop Kitchen, Mezzo, Le Pont de la Tour, Blueprint Café and Butler’s Wharf Chop House. Then there’s all the awards and accolades plus honorary degrees, professorships and doctorates: enough to paper the walls of Barton Court, the 32-room Berkshire home he shares with his fourth wife Vicki, although the collection of Bugatti pedal-cars seen on these pages – purchased from a director of the Ford motor company in France, who still visits once a year to look at them – would have to make way.

Besides the innate design nous, nurtured from such a tender age, does he put his success down to any other factors? “I could perhaps attribute most of my success to having a keen and discerning eye – a visual certainty and a strong conviction in my instincts. I can see something and say immediately ‘that’s good’, ‘that will work’ or ‘that will sell.’ But perhaps best of all ‘that’s really beautiful.’”

Mapping potential outcomes and contingencies has never been high on his priority list. “I wouldn’t say there was ever a grand masterplan – but neither would I say I took things as they came: perhaps ‘grabbing opportunities by the throat’ would be more apt. I’ve always been an impatient man, which some have said has been my Achilles Heel down the years. There has just seemed like so many things I’ve wanted to do, so you grab at the opportunity while it’s there. If I’d stepped back and looked at certain things in my life, perhaps I’d have done them differently, but impatience is in my nature and there are very few things I regret. Even the darkest periods of my life in the 1980s, losing control of Habitat and Butlers Wharf, led to a glorious new chapter opening restaurants around the world throughout the 1990s.” 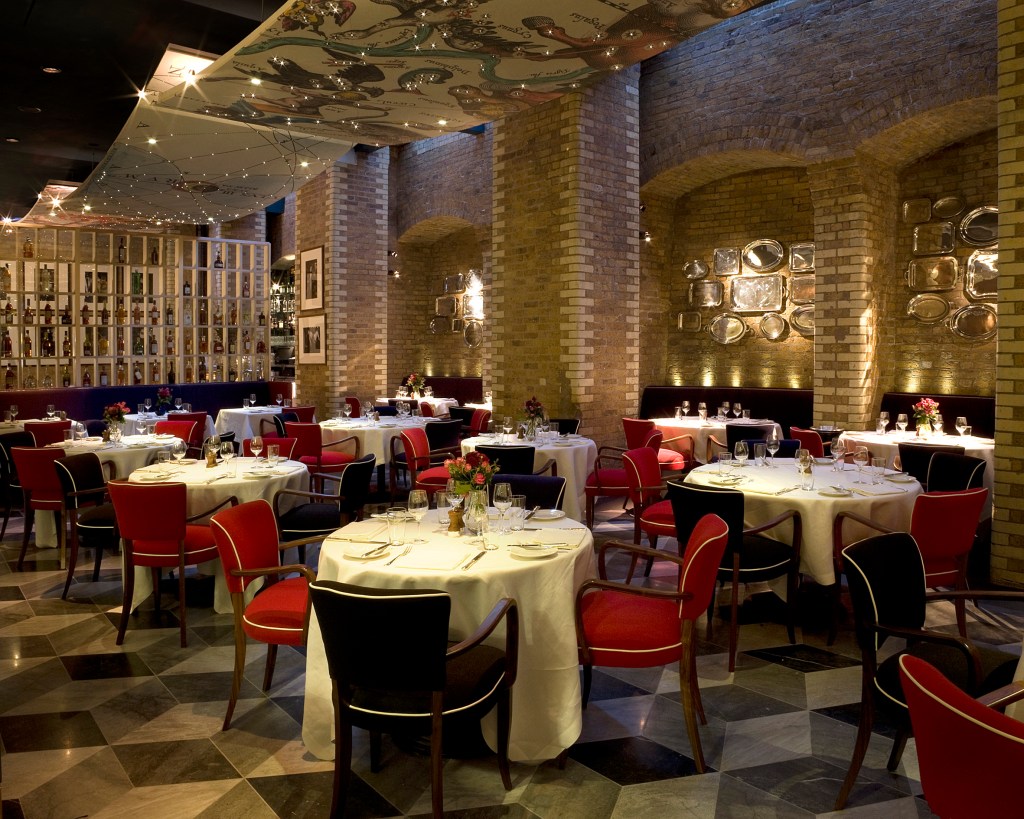 Can he attribute such impatience to any life triggers? “When you’ve suffered extreme frustration in your youth, you don’t believe that success, when it finally arrives, is permanent so you keep grabbing your good fortune while it’s still around. I think that’s true for many people who build a career in a creative industry because you’re always being judged. There has always seemed to be something better just around the corner and whilst some of my critics might point to [feeling] this as a weakness, I happen to think it is a pretty exciting Achilles heel to have. Life has never been dull.”

Well into his 87th year, Conran has had some bumps to contend with: not least a £3m legal dispute with restauranteur and former colleague Des Gunewardena and reported family feuds and fall-outs exacerbated by legal complexities over which of his five children (who include leading designer Jasper and restaurateur Tom) would inherit his empire. But Conran’s energy, his bon viveur, remain boundless, and that mischievous smile – pursed lips, notwithstanding the oversized stogie invariably wedged between them – still shines at 1000 watts: especially, no doubt, when he’s whiling away hours sipping wine in his vegetable garden.

That hunger for craft and retail – one which, when he left Bryanston, almost drew him towards making 12-bore sporting guns for a living – is undiminished by the changes enforced upon that realm by a revolution arguably more profound than that associated with steam engines and spinning jennies. “Digitalisation and online retailing fascinate me, partly because I don’t completely understand it [Conran famously abhors mobile phones], but I certainly feel its power, potency and influence,” he says. “But still, at the heart of our business, is that relationship between the hand and the eye: the sleeves-rolled-up, get-your-hands-dirty mentality of a craftsman – that’s where you really see the quality of a designer. This is where creative ideas are generated, and where you’ll find the magic ingredient.”

Might his life path have be very different if he had been born in, say, 2000? “In some respects yes because the world we live in today is practically a different galaxy from the grim and austere world I found myself trying to make my way in back in the early 1950s. I suppose it was to my great advantage that things were so bleak – we certainly had a blank canvas to work with – but it also gave us a mental toughness and grim, bloody-minded tenacity to create a more enjoyable world to live in.”

He’s optimistic – markedly so – about the future development of the domestic design milieu he has done so much to shape. “Today opportunity buzzes and pulses around every corner,” he says. “Communication is instantaneous and global and the world is much more accepting of new ideas – it’s a far less stuffy environment than the one we grew up in. It’s a great world for someone with passion, creativity, curiosity and a fierce belief in their ideas to make their mark.”

A mild concern seems to plague him about what he calls “short termism” – people wanting to achieve immediate success “stifles the creative spark”, he says, and “makes people plump for tried and trusted, safety-first options”. The key, rather, is that the young, creative and hungry “put humans and relationships at the centre of the world” (he cites Johnathan Ives as a clear example). “I hope that the future of design makes the world a less complicated but more harmonious place,” he concludes. “A world with human beings at the heart of it.” 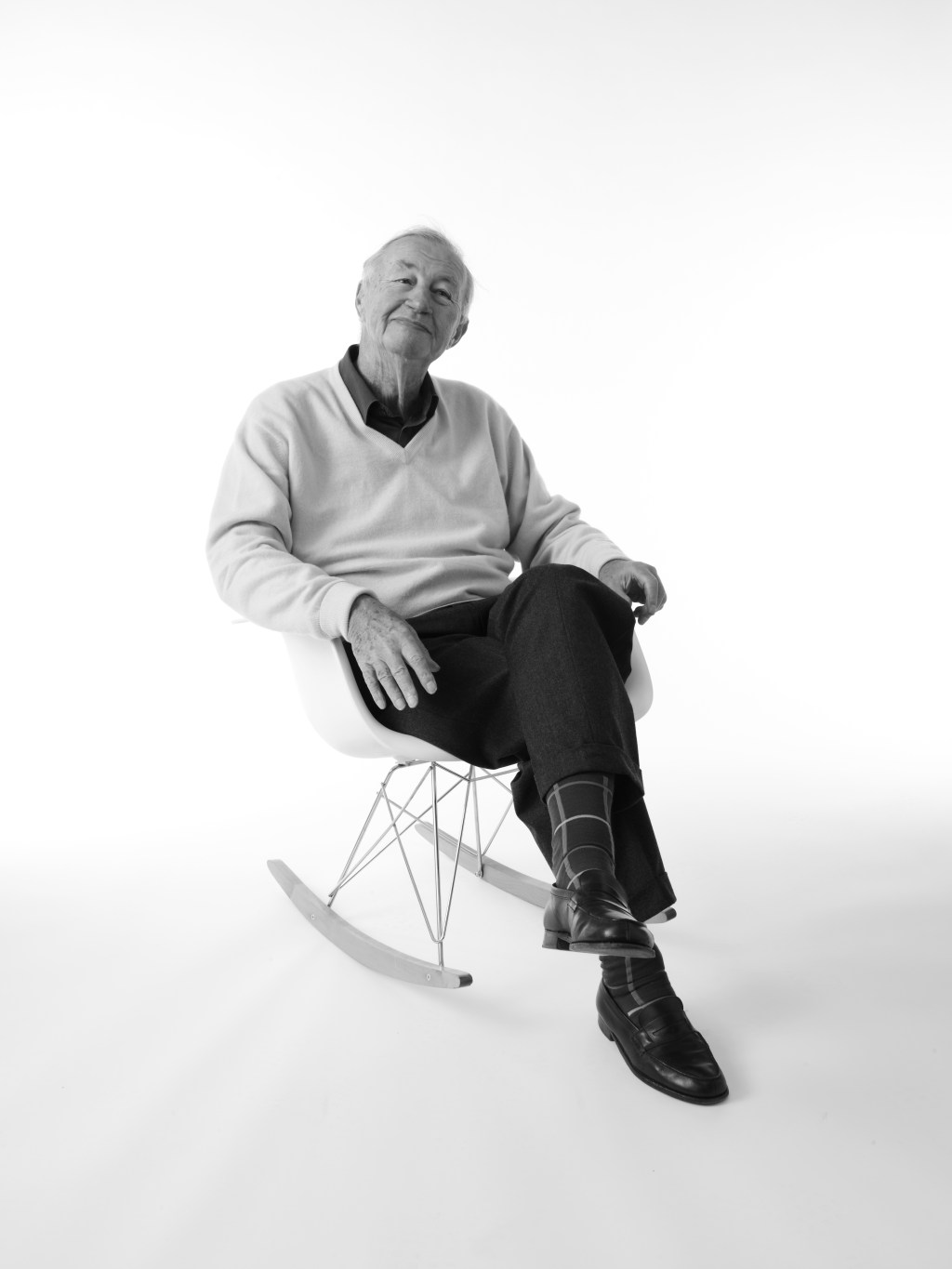