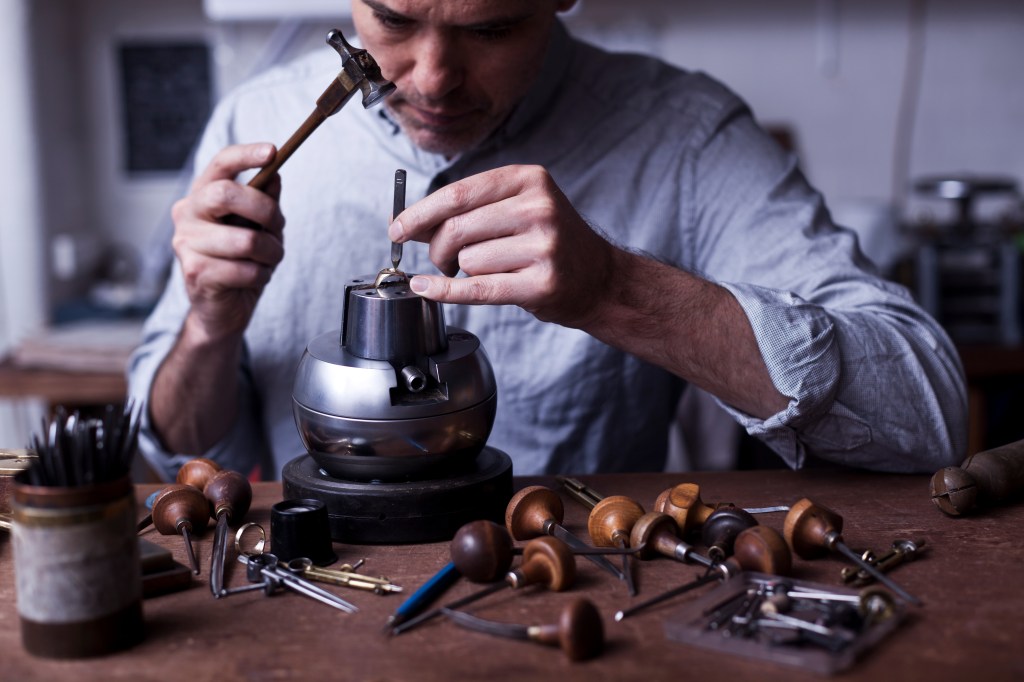 It wasn’t just Premier League defences who were terrorised by Michael Owen in the early years of this century. Around the 80th minute of the 2001 FA Cup final between Arsenal and Liverpool, with Arsenal one-nil ahead, master engraver Emmet Smith, looking over the hallowed turf from an off-limits zone in what was then known as the Millennium Stadium in Cardiff, decided it was time to etch the London club’s name onto the trophy’s list of winners. Then, along came Owen and banged in two in the last ten minutes to turn the match around. “I really panicked,” laughs Smith today, in his atelier in Hatton Garden – the district where he began his career around three decades ago aged 15. “Luckily, in the few minutes I had, I managed to erase the “A” and “r”… It was a task made more onerous by Smith’s life-long allegiance to Arsenal. 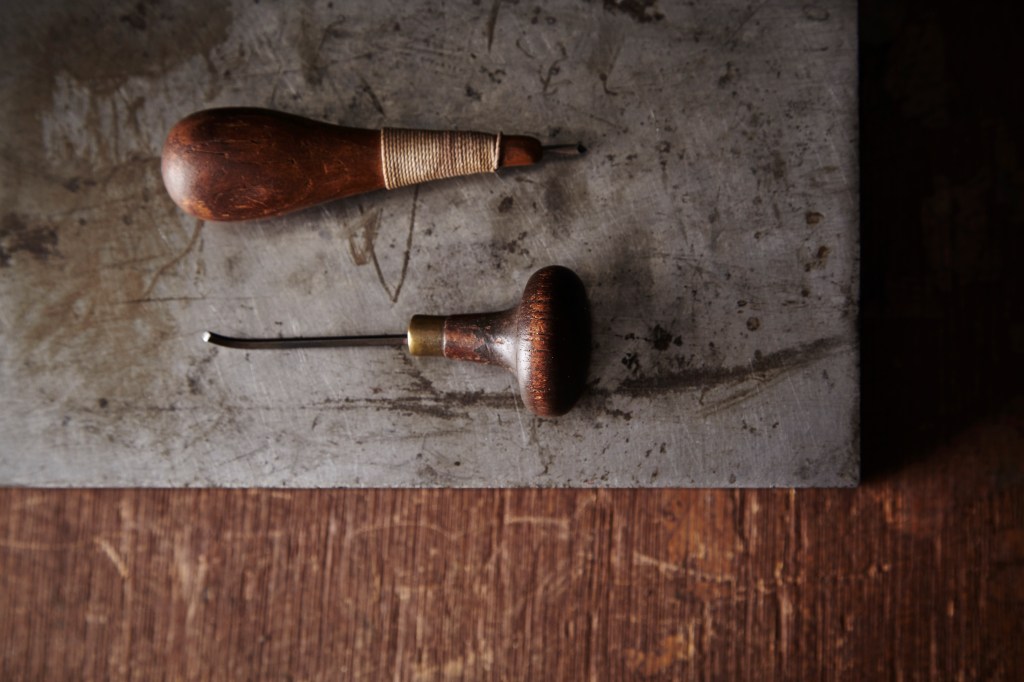 To this day, despite that mildly traumatic experience, Smith still applies his rarefied skill to sports trophies – all those involved with Wimbledon finals weekend, golf tournaments including the Augusta National and the Ryder Cup, some Formula One events, Ascot. His core business today, though, takes place in this quirkily elegant and cosy premises, the ground floor of which is filled with curios including taxidermy, jewellery and music boxes, writing stationery cases, old typewriters, tiered toolboxes and a seven-foot-long, bark-edged worktable made from a slab of ewe. 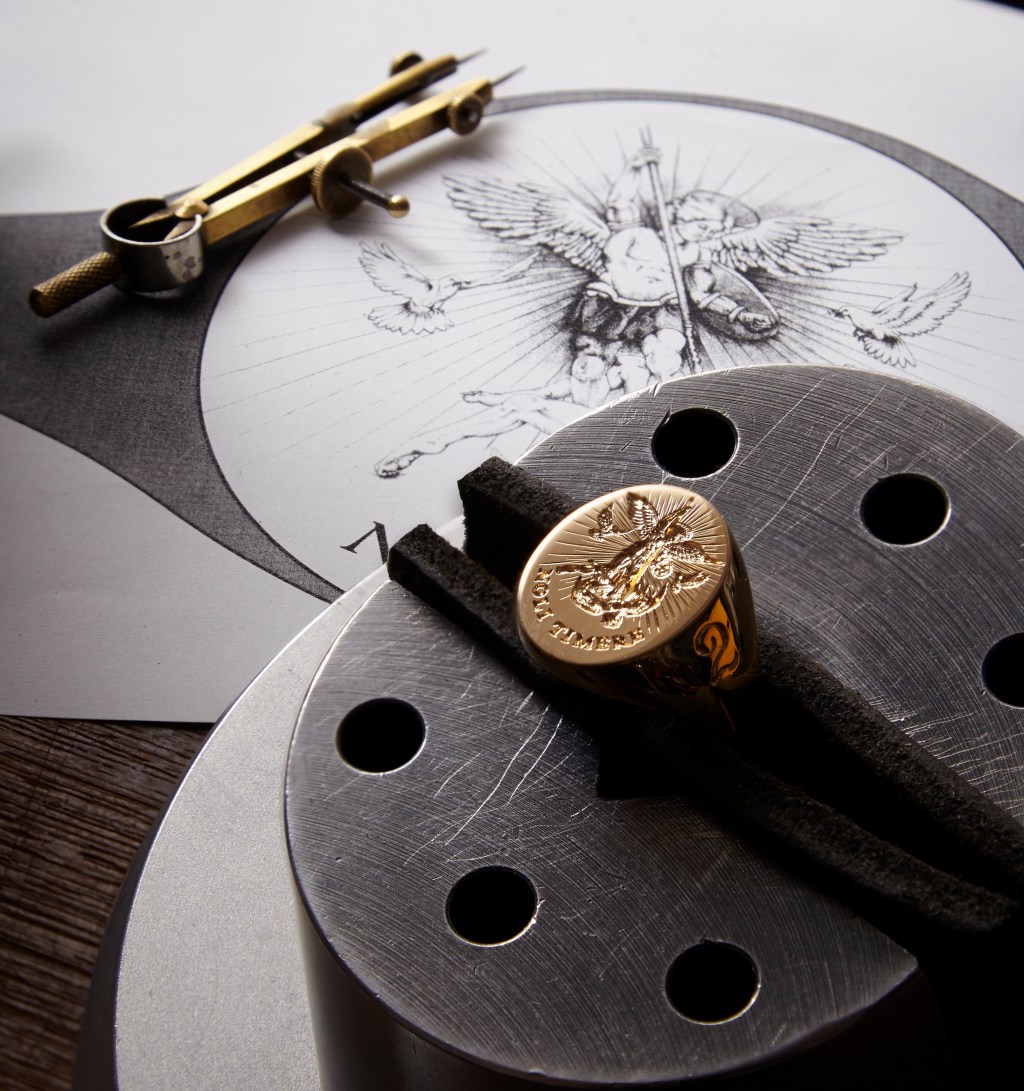 Smith founded Rebus in 2005, as a department within R. H. Wilkins (engravers to Downing Street and Westminster Abbey, among others), which he’d purchased three years previously having served as an apprentice there in the 80s (he studied jewellery design, silversmithing, diamond mounting and hand engraving at the Sir John Cass School of Art, in Aldgate East). The company’s raison d’être is the customisation of signet rings, with traditional family crests, folkloric symbolism and various other insignia and heraldry all entering the fray. Then there’s the unique custom designs carried out in-house. “If there’s no existing design they’ve brought in, we liaise with the customer to create mood boards then source key elements from that and create one,” Smith says. “If they use Pinterest, we can share Pinterest boards. It’s just a lovely processes – customers become very engaged with it. In the back of their minds, they’re often thinking about who they’re going to leave the piece to. Sometimes you’re creating stuff for three generations.” 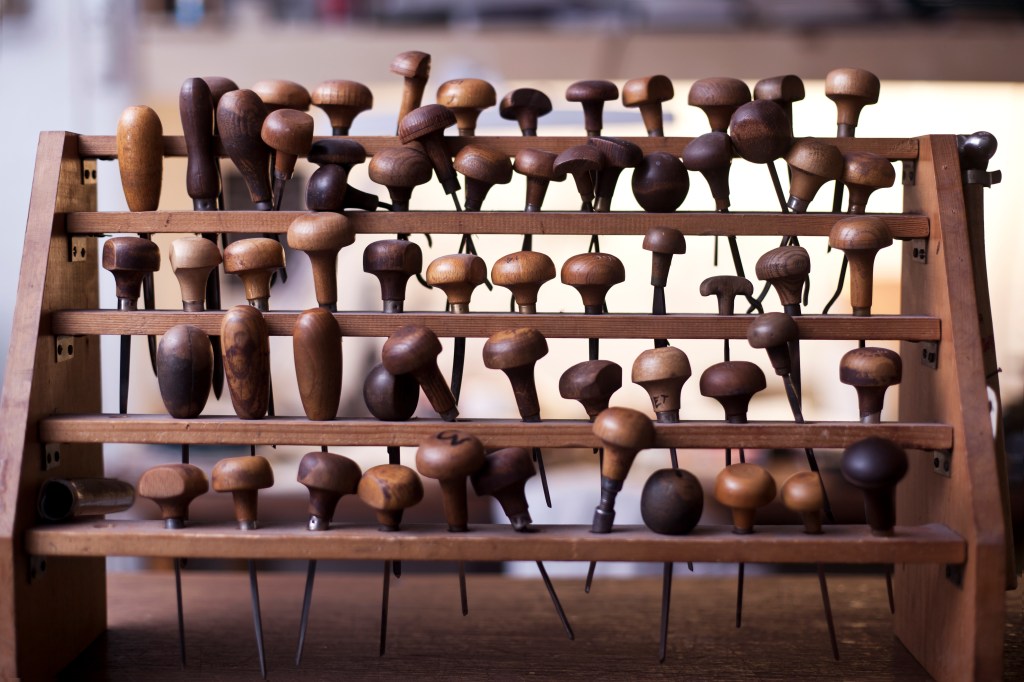 He reaches for a voluminous catalogue of past creations, in which Tolkienesque fantasy worlds and memento mori skeletons all feature heavily, while other designs are a little more cryptic. “The client we did this one with did a three-year tour in Afghanistan as a medic, so he wanted a poppy engraved with scores on it representing how they bleed the flower for opium,” explains Smith of one creation. “The Latin inscription reads ‘Dulce bellum inexpertis’ – or, ‘War is sweet to those who have never tasted it.’” Other past clients, meanwhile, have based their requests on photographs of friezes on the side of a buildings, or on biographical snippets blended together – oak trees symbolising England; quills denoting a history of journalism in the family and so on. Smith has never had to refuse a request, although the odd commission – such as one involving an origami bear – did leave him a tad bemused.

Down in the basement workshop where Smith and his team of craftsmen carry out the actual engraving, we encounter the tools of the trade: the key one being gravers of various sizes and shapes with different tips – flat, round, square. “Some tools, like the clamps and couplings, we design and make ourselves. You can’t buy them because they last a lifetime so there’s little money to be made from them – it’s the everlasting lightbulb syndrome.” Making their own equipment is not the only pleasingly folksy solution in evidence within these walls: when it comes to checking whether an etching has been carried out at precisely the right depth, staff here eschew triangulation-ready computerised laser vision, and instead grab one of the blobs of plasticine dotted around the workbenches. 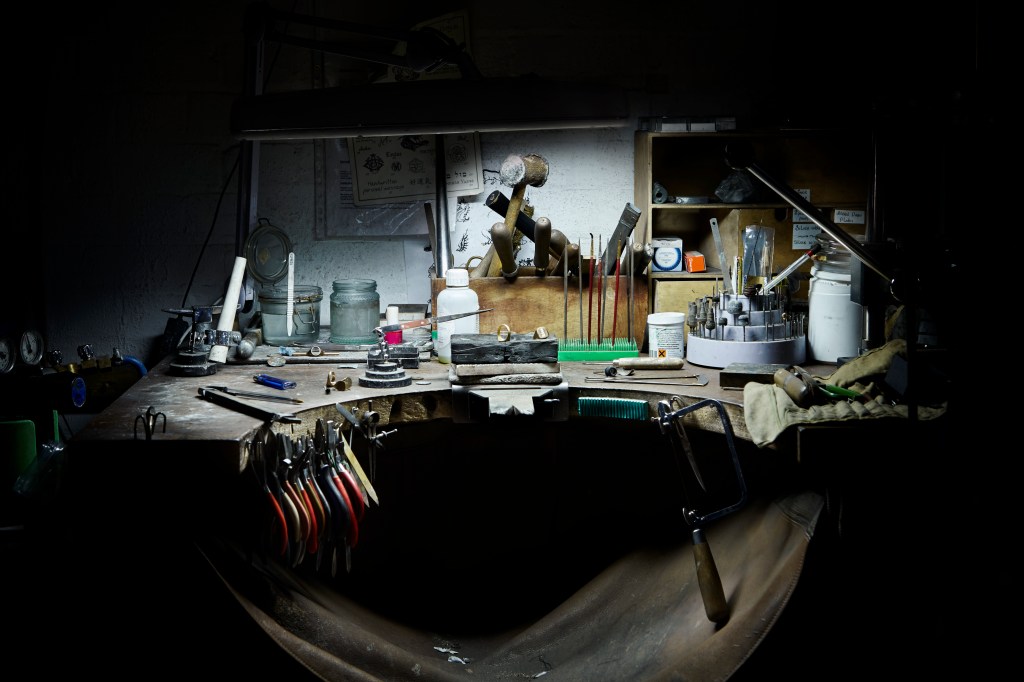 When you look close up at the tiniest of hand-tools in the room, the extraordinary intricacy of the signet rings’ designs – the feathered flourishes of a tree’s verdant portion, for example – begin to make more sense. Many of the lines drawn within these walls, Smith says, are a hair’s breadth – around 0.1 millimetre thick. But there’s more to the job than the right hand tools. Smith says that to do an engraver’s task properly – and no doubt many of the artisanal denizens of the Jura Watch Valley would concur – one must achieve something like a meditative state. “You just lose yourself in this little miniature world, seen through eyeglasses or microscopes,” he says. “It’s a very laboured process – it could take up to four days to do quite a complex piece. I find it difficult to find apprentices – many candidates are very artistic but the attention span is the problem: being able to sit still and just focus on such a tiny area for such a long time is difficult. You’ve got to love it – then everything else flows from that. Some people just take to it naturally. I did. I just loved doing it. Especially pictorial work. I could just lose hours creating all these tones and textures and bringing something to life.” 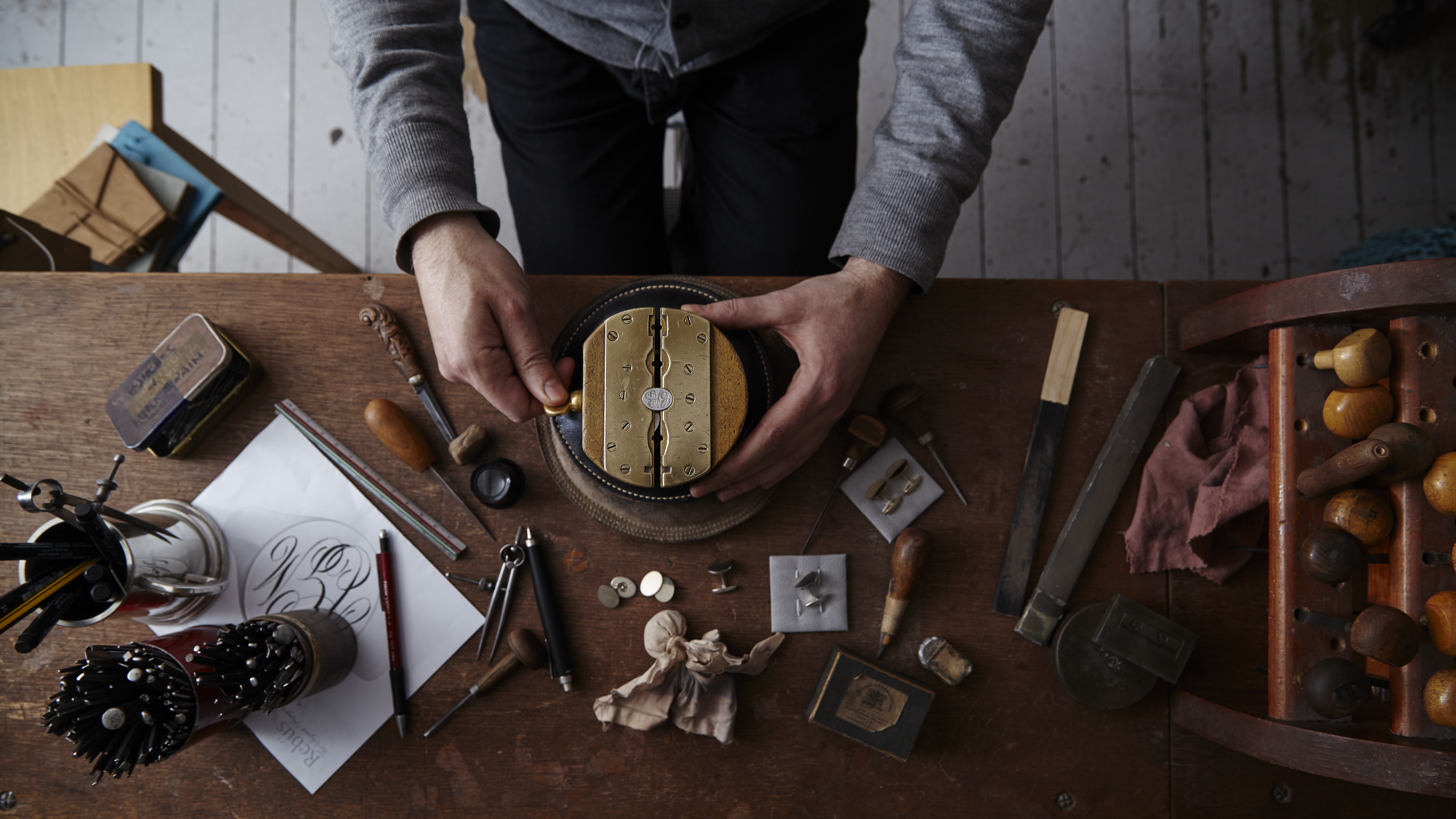 The final part of a creative process that includes hand drawing, carving, refinishing and polishing is a reminder that once upon a time, signet rings were, in Smith’s words, “just fancy tools to create seals for envelopes“. A talc-like substance is put on the ring and run through a candle flame to make it resemble soot; the ring is then pushed into molten wax, onto which it leaves an image, which is then mounted on a piece of card. This means, firstly, that the client has a tastefully packaged version of the finished design – signet rings are engraved in reverse – and secondly, if the customer loses the ring the engraving can be recreated.

This game is, after all, about posterity as well as identity.

Lab-Grown Diamonds: Are They Starting To Shine?