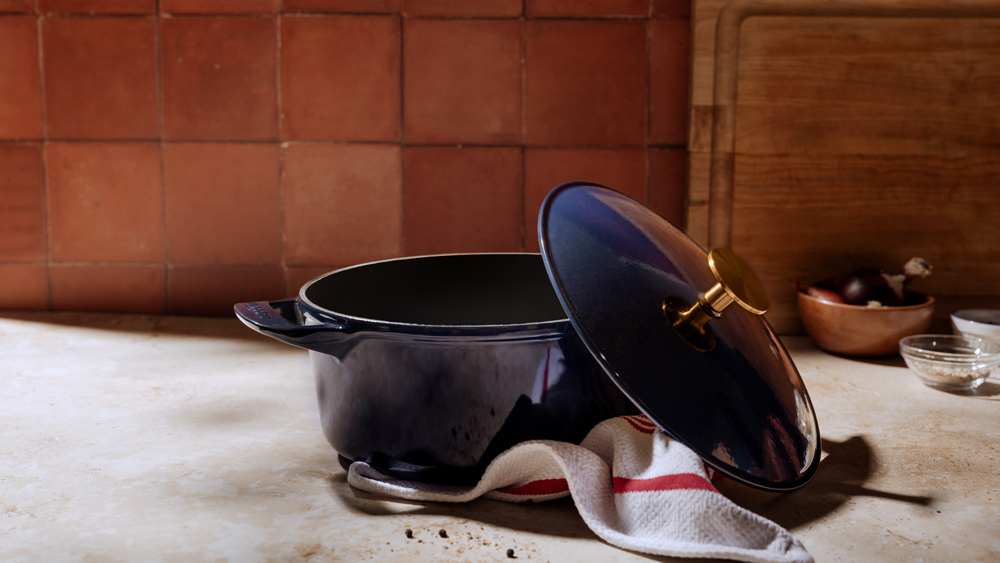 The Dutch oven market is flooded by old standbys and upstarts alike. There are the brands that have been making enamelled cast iron pots for decades—like Le Creuset and Staub—then there are the new kids on the block crashing the party with their pans—Great Jones and Misen among them. These Dutch ovens aren’t just workhorses for home cooks to make their braises, sauces and stews, but they’re also beautiful showpieces—the kind of pots you leave out on the stovetop even when they’re not in use.

There was a notable absence from this club: the leading direct-to-consumer cookware brand of the last half-decade, Made-In. That changes today, as the company debuts its first enamelled cast iron Dutch oven.

The prototypes for the 5.5-qt. pot began back in 2019, says Made In co-founder and president Jake Kalick. The company, which has been crafting cookware since 2017—and is used by Michelin three-star restaurants Alinea and Le Bernardin – had a long road to developing this Dutch oven.

“From those not on the product team, it was a bit of a running joke that we wouldn’t be able to get this product to market,” Kalick says. “The first customer-facing newsletter about this launch actually went out in 2019, then we realised the supply chain we set up wasn’t perfect enough so we scrapped it and started over.”

Bake your sourdough loaves inside your Made In.  Photo: courtesy Matt Conant/Made In

Once they locked in where in the design and the factory in France where they wanted the Dutch oven manufactured, it finally came together. The result is a handsome navy blue pan with a brass knob and black porcelain interior that weighs in at nearly 14 pounds and can withstand heat up to 475 degrees. In creating the Dutch oven, Made In pored over the little details, too.

“We have designed the underside of the lid with pea-sized dimples that evenly return steam to your food, effectively basting whatever you’re cooking,” Kalick says. “This keeps the moisture in the pan and redirects the flavour back towards the food.”

Prior to launch, we got to test the new pan, deploying it on a Bolognese, the kind of long-simmering dish that needs a pan that heats evenly to make sure it cooks correctly. The pot performed well, avoiding any hot spots that would have caused scorching. Even better, the Dutch oven cleaned up easily. It performed just as well as my Le Creuset, but the one benefit is that it did so for half the price of my beloved old pan.

The Dutch oven is now available directly through Made In’s site for £196.