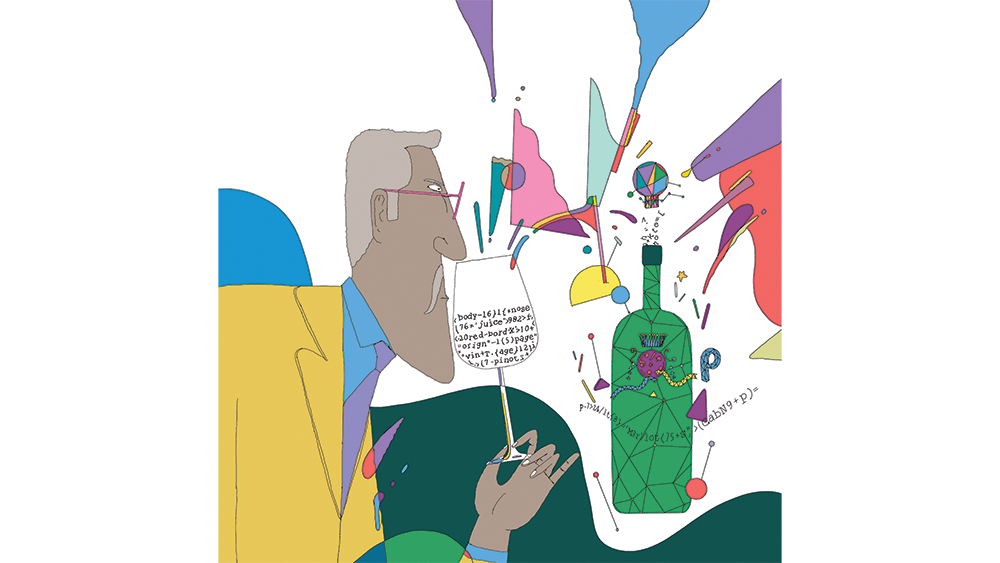 Produced by humans for around 8,000 years, wine is slow to change. That said, there has been a lot of innovation recently. Low-sugar wine is a fast-growing category, production of rosé Prosecco is now allowed, canned wine is crazy popular and wine releases paired with NFTs are exploding. Ever since that last item caught our attention, we have replaced checking vintage charts for best quality-to-price ratio with finding out what Ethereum is worth in USD, as many wine-NFT release prices are quoted in cryptocurrency. That said, most of the offers we’ve seen will accept traditional currency as well, whether dollars, euros or pounds.

We’re familiar with NFTs by now, right? If not, a quick recap: “Non-fungible token” is essentially a rather clumsy term for a digital asset representing a real-world item that can include music, art or video. “Non-fungible” means that it can’t be traded for or replaced by another item of equal value. Any one bitcoin is worth the same amount as any other bitcoin. And while two $50 bills can be traded for a $100 bill, NFTs are one of a kind. All NFT transactions are recorded on a blockchain, creating an inexpungible record.

For authentication purposes, wine NFTs actually make sense, but wine brands’ initial forays into the non-fungible realm have included enough gimmicky offerings to obscure any real value. Take an NFT drop from Graham Norton’s He-Devil, which included annual “first release” rights to He-Devil wine (hmm, sounds like a typical wine-club allocation) and a physical print signed by the winery’s cofounders. Or Sarah Jessica Parker’s Invivo X brand’s NFT, which featured digital art representations of two of her wine labels. (Meh.) Even the highly regarded Bordeaux house Château Angelus offered 3-D label art along with a barrel of its 2020 Angelus. Robert Mondavi Winery pivoted to a hybrid model, making both the wine and the art something unique: It created a limited edition of three special wines, putting them in commissioned porcelain magnums handcrafted by French porcelain house Bernardaud. The price at the time of writing was 1.20 Ethereum, or approximately $3,510.

Other recent wine and NFT releases of note include former NBA player Yao Ming’s Yao Family Wines offering 200 bottles of its 2016 “The Chop” Cabernet Sauvignon along with an NFT. These bottles could be bought only with Ethereum, and 137 have sold so far. No gimmicky art attached, just the wine, albeit with a splash of buzzy crypto.

Australia’s Penfolds released two NFTs, one in November featuring a barrel of its 2021 Magill Cellar 3 Cabernet Shiraz, which sold in 12 seconds for around £107.000. Again, all wine, no digital label art. Perhaps this sold so quickly because it was offered in dollars; potential buyers may not want to embrace using a currency they don’t fully understand or trust. A second release in January offered 300 bottles of Penfolds Magill Cellar 3 2018 via BlockBar, an online marketplace for wine and spirits NFTs, and all 300 sold within 10 hours.

If you look past the buzzwords and art projects, attaching an NFT to a bottle or barrel of wine seems like a smart move, especially to fight counterfeiting. As Guillaume Jourdan, a consultant for the luxury and wine industries at VitaBella Paris, told us, “NFT tokenisation of the digital identity and real-time tracking of wine bottles are possible… The integration of these solutions into mainstream trade and commerce is a way of eliminating counterfeits. With an NFT, a bottle of wine becomes ‘phygital,’ meaning physical with a digital identity: For every single bottle, a unique NFT is created to provide authenticity and verification.”

A bottle of Penfolds 2014 Grange Shiraz.

NFTs also allow the winery or original issuer to continue to make money on the secondary market, something that hasn’t really been possible before. The highest price a bottle of wine ever fetched at auction was roughly £457,000 for a bottle of 1945 Romanée-Conti sold in 2018. However, the winery did not make any money on that sale—but the reseller and auction house sure did. If NFTs had existed 77 years ago and the winery had attached one to that bottle, Domaine Romanée-Conti could have had a share in the profit. As Jacob Ner-David, cofounder and CEO of Vinsent, a digital marketplace for fine wine that has pioneered the tokenisation of wine, explained, “With many blockchains such as Ethereum or connected chains like Polygon, the NFT can be programmed to continue to pay a percentage of each secondary-market transaction to the winery or NFT creator… This is programmed into the NFT itself and cannot be changed.”

Where that doesn’t necessarily hold true is with a barrel. If the whole barrel were later sold at auction, Chateau Angelus or Penfolds, for instance, would be able to have a share in the profit if that was baked into the code (which it wasn’t for the 2020 Angelus). But once the liquid within the cask gets poured into bottles, the ability to validate it evaporates, unless the winery does as Penfolds did, where the single-barrel NFT will be converted into 300 bottle NFTs at the date of bottling in October 2022, with each vessel then being identified with a barrel and bottle number.

It’s easy to see the advantages of NFTs for wine, especially expensive, rare bottles, the kind that are often counterfeited and later go to auction. But what’s the deal with winery-released NFTs having digital artwork attached? It may have something to do with the fact that the first generation of NFTs were linked to digital art, so wineries (rather unimaginatively) simply continued that trend. One wine CEO pointed out that limited-edition artwork provides something of lasting value to the buyer, because the wine will eventually be consumed.

Fair enough: but for wine-based NFTs to have lasting momentum and worth, winery execs may want to remember that the liquid itself should be considered the work of art. Also, most tangible art does not have a shelf life. Wine does. Unlike an oil painting, once a vino deteriorates, it can never be restored. Eventually even the most highly rated vintage will decline in quality, making wine a limited-return investment vehicle. If there is to be value in wine NFTs beyond authentication, someone needs to come up with an idea more compelling than a byte-sized bit of art. Anyone?

When they are not at home in Manhattan or Spain, Mike DeSimone and Jeff Jenssen chase the grape harvest around the world.