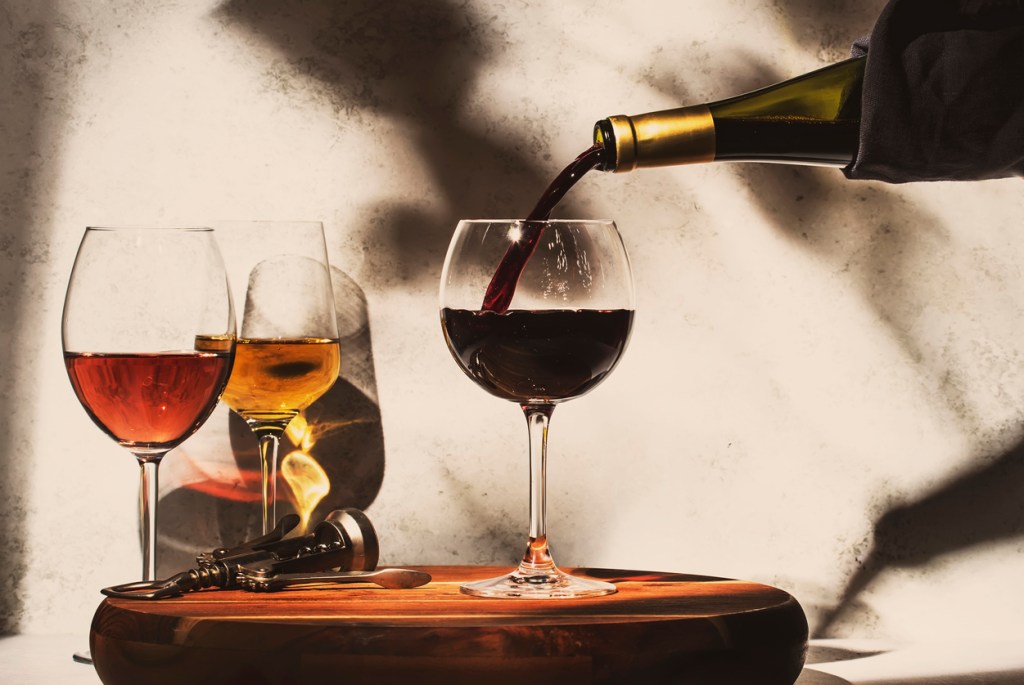 For fine wine geeks and serious collectors – a group in which I include myself – the wines of Burgundy, right now, are taking pride of place in our cellars. Up to 20 years ago, it was the first growths of Bordeaux – and other regions have had their time in the sun. During 18th and 19th centuries, it was sweet wines from the Cape in South Africa (Vin de Constance, then, was one of the “Kings Of Wines”) or those from Tokaj in Hungary (favoured by Louis XIV, Louis XV, Frederick the Great and others, right up to the time of Napoleon III).

Today, though, it’s all about Burgundy: so much so, it’s hard to get an allocation of new vintage top wines from the region, whoever you are. It’s always the same message whether you speak to the vigneron or the merchant: “We have very little to sell.”

So why are these hard-to-acquire wines the more advanced oenophile’s wine of choice right now? Tackling that question starts with an important distinction: Bordeaux vs Burgundy. Fine wines – the preserve of the educated, sophisticated and landed classes of the last couple of hundred years – were once almost exclusively viewed as coming from the Left Bank of Bordeaux: the First Growths that most of us have heard about – Château Lafite Rothschild, Château Margaux, Château Latour, Château Haut–Brion and Château Mouton Rothschild.

They were owned by mainly absentee aristocratic landlords, and each estate made wines in large quantities with little expense spared on either production or entertainment. They were, in effect, luxury brands that consumers could rely on to bring both prestige to their cellars and quality to their tables. The English – the ultimate wine connoisseurs of the last few hundred years – ordained them ‘Clarets’, and deemed them to be the fine wines of the world.

Whereas Bordeaux is known mainly for its red wines, made from a blending of several grape varietals (typically Cabernet Sauvignon, Cabernet Franc, Merlot and Petit Verdot for the red), depending on which ‘bank’ of the Gironde the vines are located, Burgundy is peculiar in being a mono–varietal region: Pinot Noir for the red and Chardonnay for the white.

Whereas Bordeaux is easier to understand, Burgundy is incredibly complex. In Bordeaux, if the château owns the vines located in its village appellation, then all the wine can be labelled as Grand Vin coming from that Château (although many choose to create second and third wines).

In Burgundy, where the Domaine (as the Bourguignons call their estates) is located has nothing to do with the labelling of the wine. In Burgundy, it is all about the vineyard, not the estate. There is a pyramid system that exists in Burgundy: at the bottom, the generic regional wines, then the village wines, the Premier Crus and finally, at the top, the Grand Crus.

To add to the complexity, there are ‘lieux–dits’ (historical nicknames for particular plots within a vineyard) that can be put on the label. Furthermore, one vineyard can be split between numerous domaines. For example, the Grand Cru of Clos Vougeot has more than 80 owners, and there are often huge differences in the quality of the ‘terroir’ (a peculiarly French word that describes everything from the soil, aspect, micro–climate and much else besides), depending on where the plots are located.

The Rise Of The Wine Geeks

Twenty years ago, there were very few knowledgeable wine lovers. The Wine & Spirit Education Trust (WSET), the leading global provider of wine education, existed but its courses were taken by relatively few people in just a handful of countries. Today, you can take up to four levels of wine education in multiple countries around the world.

With the advent of Netflix, wine documentaries have flourished and now, understanding and knowledge of wines is more broad–based than ever before. Armed with education and knowledge, a new group of wine connoisseurs have emerged: the ‘wine geeks’. These people are super–fans, with a zealous devotion to learning about and tasting fine wines. They exist, not only in the traditional fine wine consuming nations of Britain, Western Europe and the USA, but also in Hong Kong, Shanghai, Singapore, Sao Paulo and Moscow.

Was it obvious, then, that as wine knowledge permeated, interest in the wines of Bordeaux would decline relative to the much–harder–to–understand wines of Burgundy? Maybe, but ultimately the market is driven by taste and quality, not just complexity. We need to explore the differences between the wines from each region to really understand why Burgundy is now in the ascendancy.

The Era Of The Artisan

Firstly, let’s look at the people. Bordeaux is still predominantly a land of absentee landlords with professional staff running the wine estates. These are trophy assets, often owned by extremely wealthy people or large companies. There are professional winemakers, marketing and accounting people, sales teams and brand ambassadors, and many more personnel besides. These can be big operations, with some estates boasting more than 100 hectares of land under vines.

In Burgundy, conversely, domaines are principally small family enterprises, often with one key ‘vigneron’, a family member who works both the vineyard and the cellar. They are farmers, plain and simple. However asset rich they are on paper, they rarely dress in anything other than the familiar vineyard worker’s apparel you would expect of anyone working the land.

If you meet and talk to the vigneron, you will come to understand his or her domaine: the wines, the style, the philosophy and the family history. These are artisanal people. The typical size of the entire estate is often less than 10 hectares, and to find a domaine with more than 30 hectares of land under vine is extremely rare. They also make many more wines than the typical First Growth Bordeaux Château – often more than 10 – and it is not uncommon to find a vigneron and his handful of co–workers producing 20–plus wines, often in tiny quantities (one or two barrels per wine).

In the era of appreciation for anything artisanal – whether it’s coffee, rustic bread, organic local cheese, or luxury watches from companies that make just a few hundred a year – the wines of Burgundy fall squarely within the fashion for artisanal products.

The Test Of Time

It is widely understood amongst wine connoisseurs that you do not want to go near a top Bordeaux wine for at least 30 years. A young Bordeaux wine doesn’t give much pleasure. For Europe’s aristocratic class of the 18th and 19th centuries, this was not a problem, as their ancestors ‘laid down’ the wines in grandiose cellars for the next generation.

In the modern world, however, people just don’t want to wait three decades before pulling the cork. Pinot Noir – the red grape varietal of Burgundy – makes a wine that doesn’t necessarily age as well as Bordeaux wines, but is much more approachable in its youth. In other words, you can gain pleasure from drinking it after as little as a few years. This makes the wines much more accessible to a greater number of today’s wine lovers, and undoubtedly has contributed to the increasing demand for Burgundy wines as the population of global wine lovers has soared over the last decade or so.

Everyone’s heard of Chardonnay, but not everyone knows that the white fine wines of Burgundy are made exclusively from that particular grape variety, principally from the Côte de Beaune in the southern sector of the region. Undoubtedly, Burgundy makes the best white wines in the world as a region. Of course, there are fantastic white wine producers elsewhere, such as Egon Müller in the Mosel Valley, Germany, who I personally think is the world’s best winemaker bar none. But there are just fewer great white wines produced outside of Burgundy.

Pinot Noir – the main grape variety of the Côte de Nuits in the northern sector of Burgundy – makes incredible red wines, which are full of nuance, elegance, variation and complexity. They’re generally lower in alcohol than wines from Bordeaux (12–13.5 degrees compared to 13.5–15 degrees) and often more delicate, subtle and fine.

Importantly, the impact of the vigneron’s choices in both the vineyard and the cellar can make the wines vastly different from those of his neighbours, who are often located a mere stone’s throne from his vines. In essence, because a single vineyard can be owned by dozens of different vignerons, this means that the wines of Burgundy are like a box of chocolates: you never know what you are going to get.

In Bordeaux, where the wines are a blend of different grape varieties, the wines are generally more homogeneous, consistent and predictable: you get what it says on the tin. This worked perfectly well in the era of the less knowledgeable wine lover as you could rarely go wrong. However, in the modern era, wine geeks hate their wine being predictable. They want to enjoy the surprise of picking from the chocolate box and either being taken to another world of pleasure and intellectual delight or being able to declare the wine not to their taste. Possibly in stronger terms.

The Romance of Scarcity

Question: What does everyone want? Answer: What they can’t have. The Burgundy production area is less than a third of the size of Bordeaux, and even this statistic exaggerates the size of Burgundy due to the pyramid system, whereby around only a single percentage point of the production are Grand Crus wines. Plus, yields in Burgundy seem to be impacted more by global warming than in Bordeaux, and are falling.

Château Lafite can make 18,000 cases (each containing 12 bottles) of the Grand Vin in any given vintage. Even if the price is high, it is not difficult to find and acquire. The Musigny Grand Cru from Domaine Georges Roumier from the village of Chambolle–Musigny and Domaine Leflaive’s Montrachet Grand Cru are each produced from a single barrel (which contains a maximum of 300 bottles). Not only are both wines wildly expensive, but try finding a bottle of either of them to drink. Good luck!

Hence the appeal of the unicorn wine among wine geeks. Cue the posting of as many social media photos as is humanly possible when the wine geek in question finally drinks that almost–impossible–to–find bottle.

Within a few days, Charles received a call from President Macron to congratulate him – although he almost put the phone down thinking a friend was pranking him. Then came the television crews and the media articles. Now, he has received literally hundreds of calls from wine merchants, importers and private clients globally asking to buy their share of his tiny production output. Not unsurprisingly, the price of his wines in the secondary market has gone into the stratosphere.

Would this have been possible in Bordeaux? Unlikely. How many rising stars are there in Bordeaux, with many estates counting their history in hundreds of years and no clear individual vigneron being the face of the wines? The only one that stands out is the maverick genius that is Loic Pasquet, who makes the world’s most expensive wine on release, Liber Pater (€30,000 per bottle) in tiny, tiny quantities.

So, what is the million dollar question that every wine–geek–in–the–making wants the answer to? How to determine the best estates. More on which in Part II.