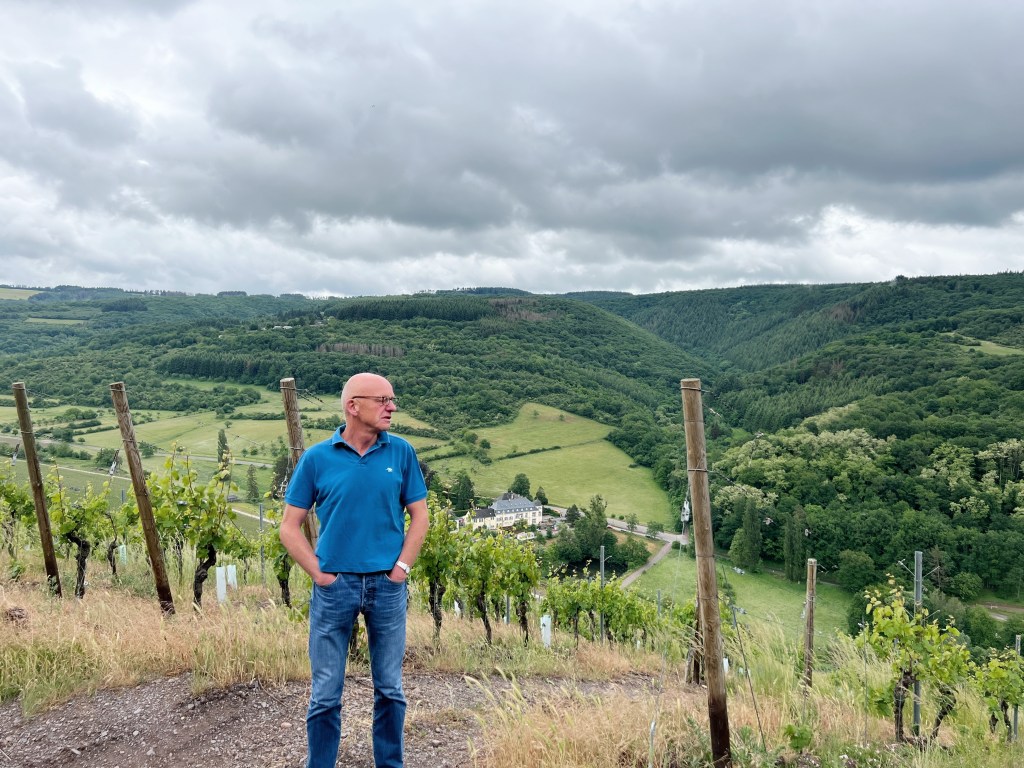 “An absolute rock star” is how David Vareille, general manager of the Arts Club in London, describes him. “The King”, enthuses Clement Robert MS, head of beverage and wine buyer for the Birley Clubs in Mayfair. “A man who transcends not only his wine region, but his country.”

That last quote is from me, and it’s well justified. As proof, last year Egon Müller was voted the Golden Vines® Best Fine Wine Producer in Europe by 442 fine-wine professionals from 55 countries — with an average experience of more than 18 years in the fine-wine industry. For a German producer of mainly non-dry (well, sweet) Riesling to win that accolade is not only notable, it’s something that should draw serious attention from every fine-wine lover on the planet.

The first thing that strikes you when you meet Egon Müller is that he’s tall, lean, soft-spoken — and very, very German. His hospitality and generosity at Weingut Egon Müller in the beautiful countryside surrounding Wiltingen, where his home and adjoining winery are located, are legendary.

As a keen collector of Egon’s wines, I have often tried to work out why they are so much better than other German Rieslings. There are some amazing German wines, in particular those from Klaus Peter Keller, JJ Prüm and the newest rising star, Eva Fricke. But Egon’s wines consistently reach loftier heights. The answer partly lies in the Scharzhofberg, a hill that is immediately behind his house and where the grapes for the majority of his wines come from — in particular, the parcel of original-rootstock (also known as “ungrafted”) old vines which form the basis for the superlative Kabinett Alte Reben.

Along with the maverick Bordeaux winemaker Loïc Pasquet of Liber Pater, Egon has formed a new association called Les Francs de Pied (which roughly translates as “ungrafted”) to bring together original-rootstock growers to celebrate the unique character and historical importance of these wines. What you get from original-rootstock wines is more intensity, character, balance and often persistence on the finish. Egon’s wines have all of this in abundance. Furthermore, their sweetness is balanced by acidity, which, on the palate, gives the perception that they’re less sweet than they are.

As Egon’s father, Egon Müller III, stated: “There’s nothing more aristocratic than nature.” And the terroir of Scharzhofberg is certainly at the top of the aristocratic tree. Scharzhofberg has always been considered one of the top vineyards in Germany. South-facing, some distance away from the River Saar, it was once a cooler site but has actually benefited from climate change. Nurtured by weathered slate above compressed clay soils, the grapes from Scharzhofberg produce a very concentrated, high- acidity wine in good vintages.

Egon’s winemaking is no different in essence than that of his forefathers. He doesn’t use skin contact and likes to cold settle grapes (in 15 degrees centigrade) into stainless steel for 24 hours. Around September–October, the juice then goes into old “fuders” (large old barrels) or stainless-steel tanks, with fermentation finishing around Christmas. The wines are then sulfurised to stop further fermentation, helped by the very low pH levels of the Scharzhofberg wines. They’re left in the fuders untouched until January, when the lees will have settled, after which they are racked and filtered, then bottled around March.

Egon makes a number of wines, from entry-level Scharzhof Riesling QbA (around £50) all the way to the mind-blowing £12,000-plus-per-bottle Trockenbeerenauslese: a sweet, botrytis (or “noble rot”) wine, the tasting of which is one of the most ethereal pleasures life can provide. The lower- end wines are ludicrously affordable for the quality in the bottle. German wine laws are virtually impenetrable, but basically the sweeter the wine, the more expensive, as they are made in much smaller quantities.

Many of the best barrels are sold off in the annual Mosel Valley Auction and are rarer and more expensive still. I’ve attended this auction with Egon and Akos Forczek of Top Selection Wines, an exclusive distributor. Head to the next one, on 16th September 2022, and you will have the pleasure of trying every wine beforehand, which must be a first for any auction anywhere in the world.

An evening spent with Egon will inevitably involve wines from other producers, too: Krug 2002 Clos du Mesnil, a youthful but classy affair with a depth of flavour and purity that few Champagnes can claim; Trimbach’s 2016 Clos Ste Hune from Alsace, which Egon describes as the world’s best producer of dry Riesling; Alain Graillot’s 2009 La Guiraude Crozes Hermitage, now made by Alain’s son, Maxime, a friend of the Müllers’; and Adrien and Guillaume Pire’s Château de Fosse- Sèche 2005 Réserve du Pigeonnier, a Cabernet Franc made by a winemaker whose passion and love for winemaking made an impression on Egon.

The three best wines his estate has ever made, as chosen by Egon Müller himself.

1964 Scharzhofberger Auslese
Known as a vintage of low acidity, this wine is majestic. Deep lemon in colour, viscous and weighty on the mid-palate, the wine is clean and crisp, with stone-fruit character and a long finish. The botrytis is evident, but the lack of free SO2 has aged the wine ahead of its time — not that it impacted the enjoyment of drinking it.
Around £2,200, BUY NOW

1971 Scharzhofberger Auslese Goldkapsel
A murky-bronze colour, the Goldkapsel is not markedly clean, but the lively acidity creates a crisp, long finish. With hints of caramelised stone fruit and alcohol levels in the 8 per cent range, this wine is truly remarkable and offers longevity, too.
Around £3,200, BUY NOW

1983 Scharzhofberger Eiswein
It’s hard to describe this viscous, deep-copper-gold- coloured nectar with an incredible bouquet of treacle, flowers and stone fruit that seems so thick it surprises you when it falls back into the glass after swirling. The acidity fizzes on your tongue. One of fewer than 300 bottles, it obtained a record price for a German wine at the time when sold at the Mosel Valley Auction in 1984. The aftertaste is endless.
Around £4,200, BUY NOW

Lewis Chester DipWSET is a London-based wine collector, member of the Académie du Champagne and Chevaliers du Tastevin, cofounder of Liquid Icons and, along with Sasha Lushnikov, cofounder of the Golden Vines® Awards. He is also Honorary President and Head of Fundraising at the Gérard Basset Foundation, which funds diversity & inclusivity education programmes globally in the wine, spirits and hospitality sectors.

A similar experience at Egon’s winery can be bid for at the annual Golden Vines® Fine Wine, Rare Spirit & Experience Global Online Charity Auction, which opens on 1st October and closes on 16th October 2022. All proceeds go to the Gérard Basset Foundation.

An Acclaimed Californian Maker Of Pinots And Chardonnays, Sonoma’s Kosta Browne Sets Its Sights On Burgundy