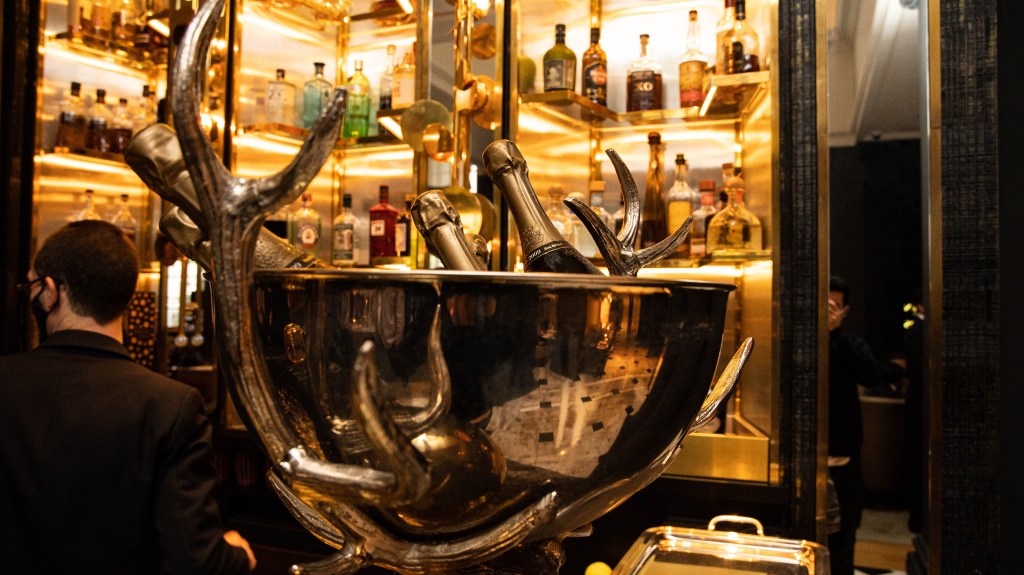 Lionel Messi has been likened to an ageing fine wine before – at nearly 35, the Argentine maestro is in his pomp in terms of ingenuity and inventiveness – but Liquid Icons co-founder and leading UK wine authority Lewis Chester is surely the first to compare him to the virtuosos who actually make fine wines. “Traditionally, wine plaudits have been handed out to certain vintages or regions, and no one remembers those awards,” he tells Robb Report. “So I always wanted our awards to be about the people, like FIFA World Player of the Year or Ballon D’Or – everyone will always remember Messi winning the latter six times.”

The honours Chester is referring to are the Golden Vines Awards. Sponsored by big-hitting brands including VistaJet, Virgin Galactic, Gucci and Rolls-Royce (which provided chauffeur-driven cars), the inaugural ceremony, which took place at Annabel’s, London in October 2021, raised £1.3m towards projects which will build diversity in the wine industry and saw Kylie Minogue, who launched her own wine brand in 2020, receive a “Liquid Icons Wine Entrepreneur Award” before taking to the stage. British gospel ensemble The Kingdom Choir also performed, as did several notable DJs at the after-party.

“We had 442 fine wine experts from around the world judging,” adds Chester. “They’re not just press – they’re merchants, brokers, sommeliers from Michelin-star restaurants, Masters of Wine from 55 countries with an average experience in the fine-wine industry of 18 years. So it’s by far and away the largest vote that’s ever taken place.”

The story of how the awards came about begins in the early 2000s, when Chester – a young oenophile who’d founded wine and whisky clubs at Oxford and Harvard on his way to working in finance, while collecting Empereur Bordeaux as a side project – met, and forged a close friendship with, the now late hotelier Gerard Basset.

Basset – who at the time of his death from cancer in early 2019 was the only person on the planet to hold the combined titles of Master of Wine, Master Sommelier, Wine MBA, OIV MSc in Wine Management and World’s Best Sommelier, not to mention an OBE – encouraged Chester to engage in formal wine education. Before long the pair were setting up their own wine research company: enter, stage left, Liquid Icons.

Their contact base, kudos and influence grew exponentially, and the idea of a glamorous gala awards event became increasingly irresistible. By now, though, Basset’s death from cancer in early 2019 had imbued the mission of Chester and another key Liquid Icons figure, Sasha Lushnikov, with a greater sense of purpose: legacy, and positive industry change, rose to the top of Liquid Icons’ priority list. Now, the idea of a glamorous gala awards event crafted to honour the legacy of Basset became increasingly irresistible to Chester and Lushnikov.

2010 Saint-Emilion Grand Cru: one of several exquisite drops served up at the Golden Vines Awards ceremony

Back to Chester: “I went to Nina Basset, Gerard’s widow, and we agreed to start a charity in Gerald’s name – the Gerard Basset Foundation. I wanted to pick a cause that I thought would make a major impact in the world of wine and, having been at wine tastings and on wine estates and dinners for 20 years, I could count on one finger the number of Black professionals I’d seen. So I suggested to Nina that we do it for diversity and inclusivity and really make a difference.”

The Gerard Basset Foundation’s diversity initiatives these days go well beyond the scholarships awarded to Black American winemakers Angela Elizabeth Scott and Dr Erna Blancquaert at last year’s gala event. Programmes underway include Wine On Wheels, a New York-based initiative which empowers people with disabilities to pursue careers in wine. “We’re also doing a scholarship programme with Adelaide University for Aboriginal winemakers, and a programme with native Americans in the Okanagan Valley in Canada,” adds Chester. “We’re doing a project in West Africa with the Africa Wine Club, too. So it’s not just diversity – it’s really aimed at inclusivity as well.”

So why are diversity and inclusivity such an overdue tonic in the global wine milieu? “You’ve got two factors,” says Chester. “The economic argument is clear – the more people you can bring in, the more communities you can bring into the wine world, the more consumption there will be across a broader, more diversified group of people. That’s going to bring more dollars into the industry.

“Then you’ve got the social argument. Wine is such a pleasure. It’s such a joy – it’s inherently social, it’s about learning about cultures and histories, and it really opens up your mind and gives you joy, happiness, which ultimately is what human beings want. To have whole communities think that the wine industry is not safe for them, or that it is not a place that people want them to be in, is denying them that happiness which I’ve enjoyed all my life.”

Indeed, whilst the awards put a spotlight on wines far more likely to be found in dusty vaults beneath Mayfair than on supermarket shelves, democratisation of wine enjoyment is one of the foundation’s core aims. “In the wine world, a rising tide lifts all boats,” says Chester. “So although they’re aimed at the very top end of the industry, these awards will resonate with the public much more, and they’ll start hearing about these domaines they’d never otherwise have heard of. They’ve probably heard of Domaine de la Romanée-Conti but probably not Egon Müller.”

The wide spectrum of experts – press, merchants, brokers, Masters of Wine, master sommeliers – are on the look-out for ‘wow’ factor, Chester says, whether assessing consistency across a domaine’s range or peripheral wine innovations. “The Julius Baer Golden Vines Innovation Award last year went to Massachusetts-based wine preserver company Coravin,” he says. “Their products have elevated sales of higher premium product across the world, by allowing restaurants that peace of mind when serving much higher valued bottles of wine on a per-glass basis than before. This year, it could be someone who solves the frost problem in Burgundy. It could be an educational institution like the Kedge wine school in Bordeaux. It’s anyone who has made a material impact on the fine wine industry – and not a producer, but an ancillary part of the industry.”

This year’s gala is set to take place in Florence, in ’23 the event will be in Paris: beyond that, major cities around the world have been earmarked. And, with New York and Singapore also on the horizon, Golden Vines is going global.

2018 Egon Muller Scharzhofberger Riesling Trockenbeerenauslese
“It’s already extraordinary at such a young age, and I think it’s going to be one of his best wines he’s ever made,” says Chester of a fruity, floral wine that embodies the Summer months with aplomb.
£10,400, BUY NOW

1991 Ridge Vineyards Monte Bello
Chester describes this red  from the Santa Cruz Mountains – a blend of cabernet sauvignon, merlot, petit verdot and cabernet franc which won the 2021 Golden Vines Americas award – as “The best Monte Bello that I have tasted” and “still incredibly fresh and young”.
£550, BUY NOW