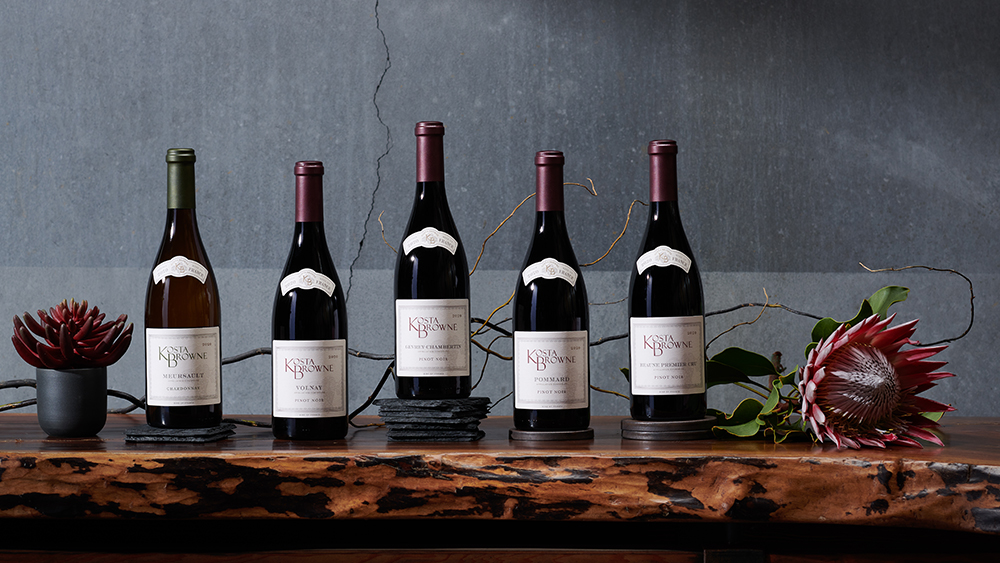 In Burgundy – a region where famed vineyards are carved into dizzying webs of micro-plots, ownership, and brands, and the top Pinot Noirs and Chardonnays are inching closer to unicorn territory– a new producer is no small news. The newest of all, though, is rather explosive (as they say in the news business) headline material. It is. . .drum roll. . .a winery in Sonoma. This June, Kosta Browne, maker of bar-setting Pinots and Chards from an exciting cross section of California’s great sites, will release five 2020 Burgundies to its members: Pinot Noirs from Volnay, Pommard, Beaune (the one Premier Cru in the lineup), and Gevrey-Chambertin (all at around £100), and a Chardonnay from Meursault (just shy of £100).

It’s a long way from a barrel of Pinot in the garage – which is where Dan Kosta and Michael Browne got their start– to making wine from coveted fruit sources in Burgundy. But it’s not shocking, considering the trajectory of Kosta Browne. Now in the Duckhorn Portfolio, KB is helmed by a couple of vinous visionaries, VP and general manager Neil Bernardi and winemaker Julien Howsepian. And in recent years, they’ve evolved the brand from its Russian River Valley roots to the wider Sonoma Coast and beyond, purchasing the Cerise Vineyard in Mendocino’s Anderson Valley and broadening vineyard sources down through California all the way to Santa Barbara’s Sta. Rita Hills. Burgundy has been on their minds for some time, in the same vein of being curious about—and involved in—regions beyond Kosta Browne’s home field. It was a natural jump to the real home, the Old World reference point, for the site-driven Pinots and Chardonnays they were making in California.

As it turns out, though, Burgundy is also heritage for Howsepian. His grandmother grew up in a tiny village outside the town of Nuits-Saint-Georges, which he and his dad finally found, complete with a street carrying her maiden name. (Although, Howsepian challenges, can a place in France even call itself a town if it has nowhere to buy a loaf of bread?) His father’s uncle worked in local wineries. Going back to Burgundy– making wine there – would be a full-circle proposition.

The idea took form, but there seemed to be no pathway. How could a couple of Americans break through the barriers of a formidable French region? Howsepian and Bernardi made numerous trips, but as Howsepian describes it, they resembled pilgrimages more than planning. But humble curiosity fueled solid relationships on the ground, and in 2020, a partner (choosing to remain anonymous) came through – the breakthrough they needed to procure fruit and establish a winemaking operation under the Kosta Browne label. The timing was right, in Bernardi’s view. “The pandemic forced everyone to think outside the box,” he says. “There was a global reset, and even in Burgundy, changing times called for different ways to go to market. A new concept with a well-established California winery was intriguing.”

It’s easy to imagine creative clashes between a winemaking team working off some 700 years of tradition (the Cistercian monks famously enclosed a Burgundy vineyard in 1336, creating the first Clos – Vougeot) and a New World winemaker with all the maverick leeway of an industry (at least a modern one) only about 50 years old. But that’s not the experience Howsepian reports. Sure, there were immense logistical challenges in opening up a new route, shipping the wine – and don’t get him started on the compliance issues for wines picked, fermented, and barrel-aged in Burgundy, then shipped to California and bottled here. But, he says, “We had common goals: to make fine wines, wines of place. We had the same philosophy as the Burgundians. We were looking to express individual terroirs as they want to be. Each place should taste different.”

In fact, the team at Kosta Browne had already studied terroir as it’s expressed in key regions in Burgundy – and how the wines compare to those from key regions in California – through a series of blind tastings. And the results were more than useful. “It was kind of shocking,” says Bernardi, “sometimes the Burgundies weren’t as different from the California Pinots as we expected.” Their findings and impressions, part of the impetus to delve into winemaking in Burgundy, also informed their search for the regions to represent in their first vintage – what villages especially drew them? (And would speak to an American audience?)

And as luck would have it, they couldn’t have launched with a better vintage. The growing season in 2020 was warm, yielding brightly fruited, expressive wines. At the same time, the clusters and berries were small, for deep concentration and good tannin structure. The Kosta Browne 2020 Volnay, a village in the Côte de Beaune often marked by elegance and soft tannins, does reflect the region’s typical delicacy, but its distinctive palate dances with red fruit, vivid minerality, and a surprising tannin structure. The Kosta Browne 2020 Pommard – a village just a short stone’s throw from Volnay yet known for more powerful, muscular wines – is subtly darker and spicier, but its tannins were resolved in the warm vintage into creamy seamlessness. (As Howsepian puts it, “there’s just a tiny rustic kiss on the back of the palate.”)

You might say the Kosta Browne 2020 Beaune Premier Cru captures a little bit of the Volnay and Pommard together, adding depth and intrigue with exotic spice and a touch of licorice under lush plum and berry layered with earth, herbs, cedar and a hint of salinity. It’s rich, soft, and approachable. And if the Beaune combines Volnay and Pommard, the Kosta Browne 2020 Gevrey-Chambertin from the Côte de Nuits packs in both the power of the Pommard and the richness of the Beaune. Beautiful florals and dark spice lurk under very slightly crunchy red fruit (“strawberries you grew yourself,” says Howsepian), and substantial tannins are resolved into silkiness. Not to be forgotten, the Kosta Brown 2020 Meursault is possibly the most familiar in the lineup, with echoes of California Chardonnay in its rich gamut of citrus and gorgeous mouth-feel. But there’s an innate minerality here distinctive to white Burgundy – and immensely appealing.

A remarkable fact about these Burgundies – uniquely different expressions of place – is that the longest distance between their vineyard sources is about 30 kilometers (less than 20 miles). Compare that to Kosta Browne’s California Pinot Noirs – also vivid expressions of site – which come from vineyards hundreds of miles apart, from Northern California all the way to Santa Barbara County. Howsepian and Bernardi have managed to drill down into the microcosm of Pinot Noir’s ancestral home and display the wine’s spectacular capacity to taste of the most specific spot where it was grown.