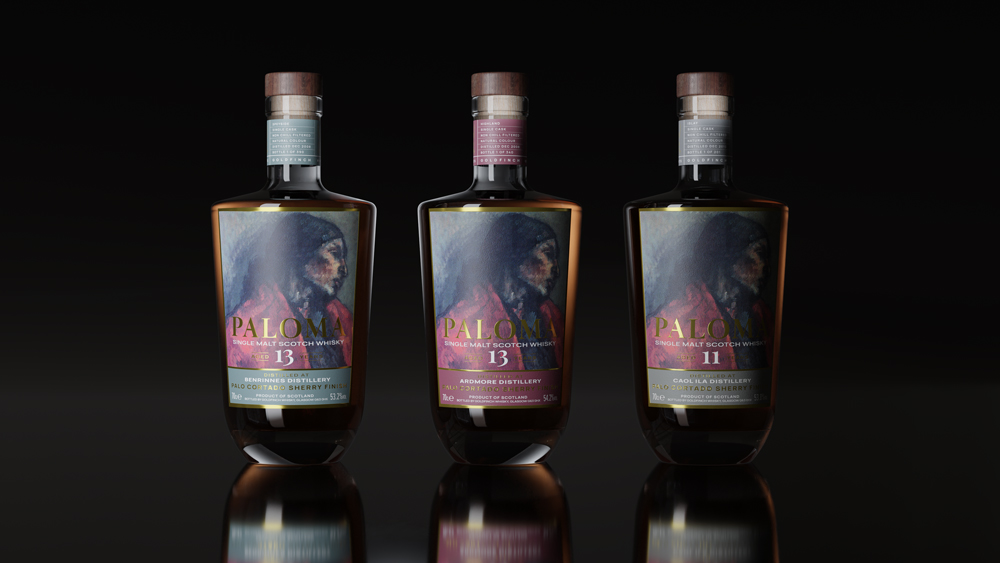 There are some names in single malt scotch whisky that are so familiar, you’d think there’s nothing new left to try from these distilleries. But you would be wrong – another independent bottler has hit the scene offering whiskies from well-known distillers that have previously been unavailable.

Two series make up the new lineup, The Kilnsman and Paloma. The Kilnsman is named after the art of kilning the barley that will become whisky, or heating it to stop germination and dry it out. Sometimes this is done with peat to create a smoky dram, but more often it is not. There are four expressions that comprise this series: 11-year-old single malt from Caol Ila finished in a sherry octave cask, 13-year-old from Ardmore, 14-year-old from Highland Park and 10-year-old from Bunnahabhain. The bottles for these whiskies are dark and minimalist, recalling designs from decades past.

The Paloma series, on the other hand, is a tribute to sherry–specifically the influence of sherry cask maturation on whisky. But not the usual suspects of Oloroso or PX sherry casks, these whiskies are finished in Palo Cortado casks, which is fairly uncommon. There are also four expressions to try here: 14-year-old unpeated from Linkwood, 13-year-old unpeated from Benrinnes, peated 11-year-old from Caol Ila and 13-year-old peated whisky from Ardmore. “​​We created Paloma to tell a different story and reveal the influence that Pola Cortado sherry can have on a variety of single malt whiskies,” said Macdonald-Bennett. “We chose casks previously containing one of the rarest sherry varieties in the world to finish our first releases. By focusing on the Spanish connection where sherry is produced, we have created something that looks beautiful and timeless, which tastes incredible.”

Indeed, these bottles are fetching, with a rendition of a painting called “La Paloma” on the label. As mentioned before, you’re likely familiar with many of the distilleries that these whiskies came from, but these are not whiskies you’ve tried before. The numbers are extremely limited, with fewer than 200 bottles available for most of them, but the prices are surprisingly reasonable. So even if you think you’ve tasted just about every whisky out there, head on over to the Goldfinch shop if you’d like to give something new a try.

This New Company Scoured Scotland For Rare Whiskies – Now, It’s Offering Them To The Public