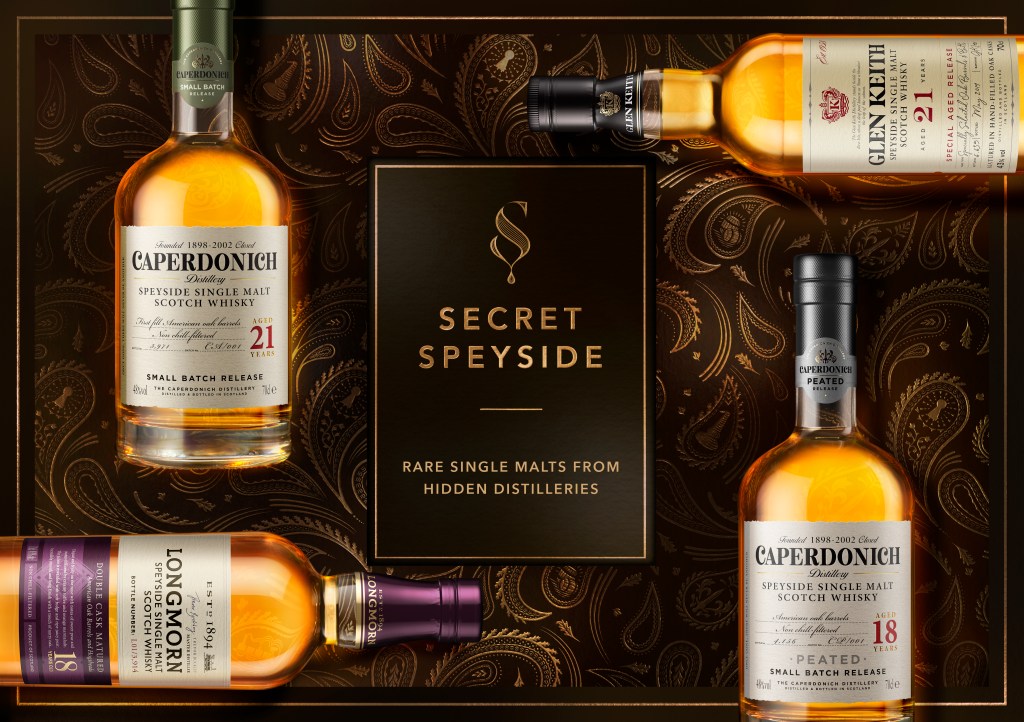 What a vast boxed set of Bob Dylan vinyl bootlegs is to your family’s resident muso, this is to its proud whisky connoisseur. Chivas Brothers’ largest Single Malt collection release to date, it features 15 single malts, all 18 to 30-year-olds, from four elusive but (in informed circles) highly esteemed distilleries in the area around the River Spey in Moray and Badenoch and Strathspey, in north-eastern Scotland.

From the Caperdonich distillery – “A Vanished Distillery” – which was taken down brick by brick in 2011, the collection includes three unpeated whiskies packed with ripe orchard fruit flavours and offering a complex body with a long, smooth finish, as well as three gently peated versions – rare in a Speyside single malt – which pack a sophisticated smoky depth. Once tasted, these whiskies will never be experienced again.

From the Longmorn distillery (“The Pioneering Distillery”) – whose technologically pioneering approach was conceived in 1894 by founder John Duff, who built a railway station next to the distillery to get his product to the hands and lips of whisky lovers as fast as possible – the collection includes an 18-year-old, a 23-year-old and a cask-strength 25-year-old whose soft, creamy toffee and rich flavour profile justify the maker’s reputation as “every distiller’s favourite apart from their own”. All are subject to limited release.

Thanks to its pot stills being taller than most, the three contributions from the Glen Keith distillery, “The Landmark Distillery”, which occupies the ruins of an old mill on the banks of the River Isla, offer a complex, smooth iteration of the traditional Speyside style, albeit with juicy summer fruit notes. The special aged limited release included here encapsulates beautifully the distillery’s strengths. Finally, the first official bottling from Braes of Glenlivet – “The Remote Distillery” (and it’s so remote it is watched by a lone keeper at night), one of the highest distilleries in Speyside, adds some tropical fruit flavours to the collection, layered atop a smooth, balanced whole via the three whiskies it has added to the collection’s remarkable taste repertoire.

“With centuries of rich whisky heritage against a jaw-dropping Scottish landscape, Speyside is the treasure chest of Scotch and brimming with untold stories,” says Alan Winchester – a Chivas Brothers Scotch whisky icon with over 30 years of Speyside distilling experience. “Curating the Collection has been a labour of love for the Chivas Brothers team; its contents have been hand-selected to help shine a light on some seldom-seen distilleries, their rare malts and unique histories. Any whisky connoisseur will find something new in this world-class selection, which demonstrates the breadth of flavour and character that Speyside distilleries can achieve.”

The Secret Speyside Collection is available now, exclusively in Global Travel Retail for one year, before rolling out into selected markets globally from summer 2020. Discover more at www.secret-speyside.com.