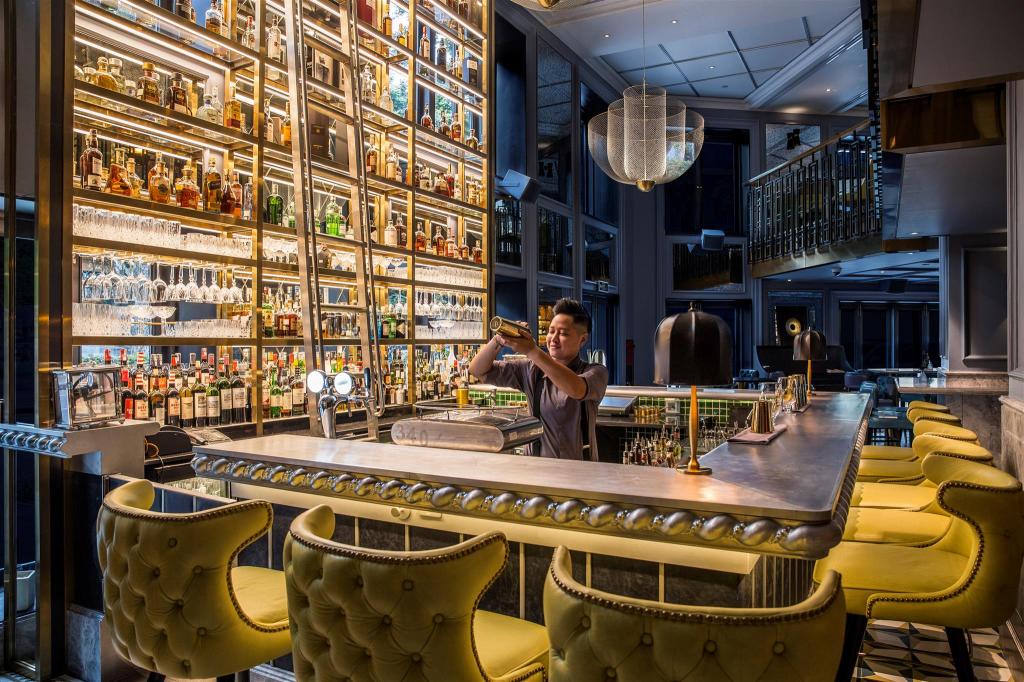 The Metropole in Vietnam’s capital is one of the world’s legendary hotels. Since its doors opened in 1901, it’s hosted politicians and celebrities and played a part in both the city’s tumultuous history as well as its energetic social scene.

The renovation of its famous Angelina bar, which reopened in September, was a new chapter: one in which the plot has now thickened with a new addition to the hotel’s repertoire – the city’s best weekend brunches. The decadent offering, the first of its kind in Hanoi, offers either a la carte dishes or a set menu option; whichever you choose, you’ll want to opt for the additional “bottomless cocktail” offering. Speciality dishes include French toast, pancakes and waffles plus dishes given a unique twist – such as eggs benedict served with Alaska Crab Meat, Caesar salad with Lobster and Angelina eggs with wagyu beef.

You’ll have had a top-grade hotel brunch before:  but perhaps not in such illustrious surrounds. Everyone from Robert de Niro and Michael Caine, Fidel Castro to Barack Obama, Jane Fonda to Catherine Deneuve have stayed amid its Indochine elegance and five-star French colonial splendour. It’s where Graham Greene wrote The Quiet American, where Somerset Maugham penned The Gentleman in the Parlour; where Charlie Chaplin spent his honeymoon and Joan Baez wrote the haunting Where Are You Now My Son? (while sheltering from the bombs in its bunker).

First opening its doors in 1901, the luxurious five-star Sofitel Legend Metropole Hanoi, originally designed by André Ducamp and Gustave-Émile Dumoutier, is where royalty, presidents, film stars and journalists have mingled around the terrace bar, courtyard and pool. It’s where luxury brands host their launch parties, grooms-to-be pose for their pre-wedding photos and tech titans do international deals over a pho breakfast. Briefly changing its name to Thong Nhat Hotel (which means ‘Reunification’) when Vietnam was declared independent, it’s a true witness to history. And now Vietnam’s most famous hotel celebrates another chapter in its history with the makeover of its celebrated Angelina bar.

A luxury destination in its own right, Angelina unveiled its completely refurbished restaurant and wine bar back in September, with Robb Report in attendance. Along with newly appointed Michelin-starred head chef Aurélien Houguet, who cut his teeth at establishments such as the five-star Ashford Castle in Ireland, the Angelina is also offering a designated whisky lounge – the first, surprisingly, in this whisky-loving nation – with over 200 whiskies in stock.

The Scottish influence extends to the lounge’s wallpaper, which has been designed by Scottish firm Timrous Beasties, a design studio founded in Glasgow in 1990. The top-to-bottom refurbishment, meanwhile, comes care of award-winning Scottish designer Karen Hay, founder of the Hong Kong-based interior design studio INdulge. “The superior level of attention to detail ensures your guests will remember their positive experience with you, long after they have left,” she says, and, waiting behind a charcoal curtain, the lounge’s velvet wingback chairs and roaring fireplace certainly ensure it’s a cockle-warming slice of that old Celtic spirit in south-east Asia.

Says the hotel’s general manager, Mr. William J Haandrikman, “The refurbishment of the Angelina bar, lounge and restaurant has brought it up to date with a fresh, modern design that’s still in keeping with the luxurious and historic grandeur of the rest of the hotel.”

The space, decked out with a gold, mustard, maroon and dusty blue colour scheme, is located over two storeys, with an eight-metre-high floor-to-ceiling bar. On the second floor dining area, guests can choose between the likes of lobster rolls with caviar, Arctic snow fish, roast Welsh lamb pie and Wagyu beef burgers topped with cheddar cheese and black truffle, courtesy of Mr Houguet’s fabulous menu: one which serves up fresh interpretations of classic European and New World dishes. All washed down of course with selections from an exceptional wine list and hand-crafted cocktails. Sláinte!