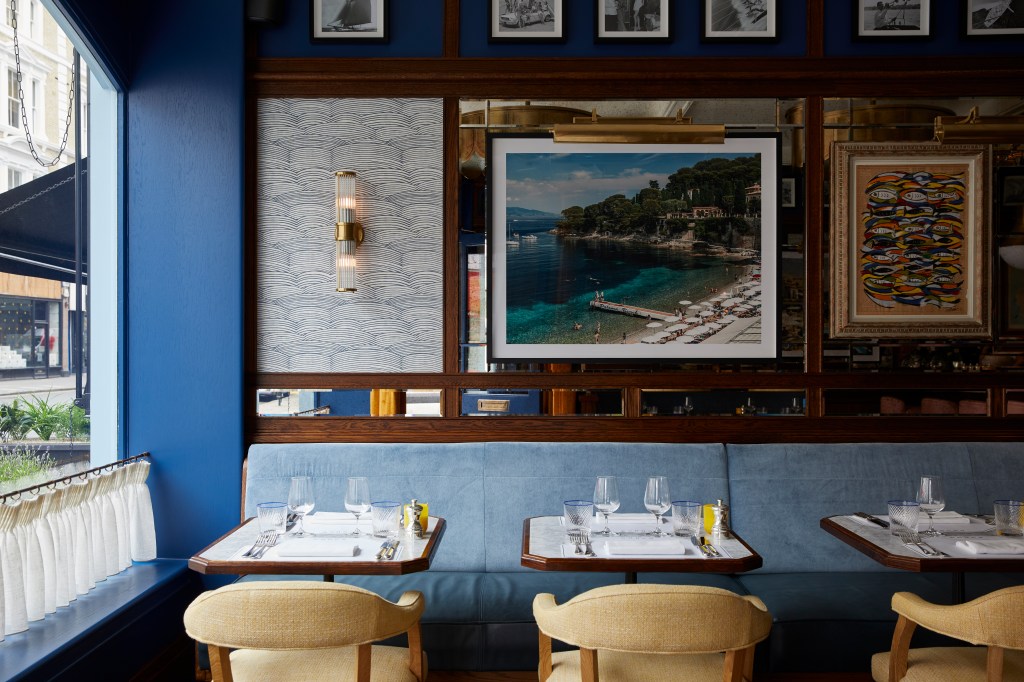 We admire Chucs’ modesty in referring to its fifth London opening as a “café concept”: if you ignore the surrounding Kensington architecture, lounging within the Italian restaurant group’s first casual dining venue feels more like being on a veranda overlooking Lake Como. Indeed the interiors, whilst in part based on cues from Chucs’ already established London sites, were dreamt up by designers Fettle Studios (led by Andy Goodwin) with the effortless glamour of 1950s’ Italy firmly in mind.

And, those value Il dolce cibo as much as la dolce vita won’t be disappointed by what’s served up within the chalky-cerulean walls of this new kid on one of the most expensive blocks in London. While the breakfast menu involves the usual suspects, albeit with a quirky spin and no little finesse – think eggs benedict with smashed avocado, poached eggs and smoked chilli – Executive Chef Simon Henbery (formerly of Fifteen London, Barbecoa and Ace Hotel Shoreditch) and his team have come up with an all-day menu which already has a few customer firm favourites: notably cobb salad, chicken paillard and Milanese, tagliatelle with crab and Amalfi lemon, bigoli cacio e pepe.

Partly incentivised by excited chatter about the wine list (deservedly so, it turns out, with an impressive number of entries on it available by the glass), as well as by rumours of delectable small-plates such as 24-month prosciutto di parma, broad beans and smoked mozzarella, Robb Report visited on an evening. A Friday evening, to be exact, with the restaurant’s wraparound terrace filled to the lavender-packed window boxes with 20-somethings nursing bowls of gin-T which, two decades previously, they might plausibly have taken a dip in.

The pressure the kitchen must have been under didn’t manifest itself one iota, as one course after another – a robust tasting chalk farm smoked salmon with baby beetroot, horseradish and watercress; a Dedham Vale steak whose perfect marbling and fat content sparked a thumbs-up to the establishment’s dedication to local produce; and an eyebrow-hikingly sharp, fresh limoncello sorbet – made the word “café” seem strangely dysphemistic.

So what’s with that word being in the name? Bar the fact that most dishes can be takes away? Well, it’s certainly a café in the French sense: we’re not being hyperbolic when we say that this is one of the few London outlets where one can buy the best coffee on the planet. Founded by Amir Gehl, a Londoner of Russo-German origin, Difference Coffee is a supplier to the glamourous bars, Michelin star restaurants, private clubs and palace hotels the world over. Sourcing only coffee beans which meet the most borderline-obsessive of criteria, the company even employs a Master Roaster, Jonny England, who is one of just four licensed ‘Q Graders’ in Europe and a Certified Judge for World Barista Championship and World Brewers Cup. Taste the coffee it produces, and suddenly it makes sense that Gehl – who frequently gives private talks in New York, London and Asia on the subject – regularly uses the word “Terroir”.

Not only has South Kensington’s got another jewel in its already glittering culinary crown: the word “café” has received a serious upgrade too.