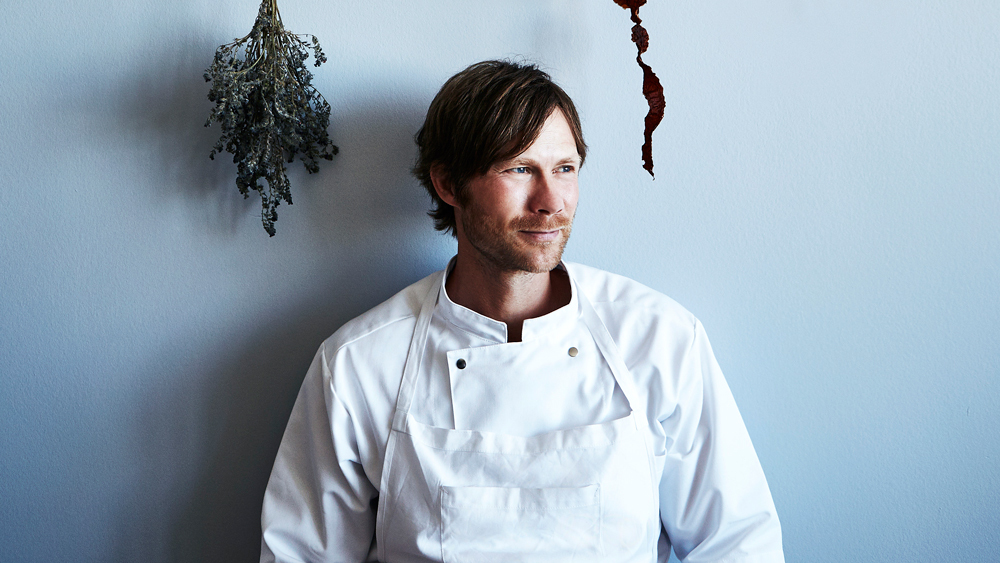 Late on a Wednesday afternoon, the streets surrounding the restaurant Geranium in Copenhagen swelled with people eager to get into the building. The vast majority weren’t there to see chef Rasmus Kofoed cook. They gathered for the building’s fellow tenant: FC Copenhagen. The local football club had a Europa League play-off match that day, and fans had turned out in droves, probably unaware that tucked into the top corner of their beloved team’s stadium was also one of the world’s best restaurants.

Kofoed and Geranium must be used to being overlooked by the swirling hordes by now. Sharing a city with Noma and René Redzepi’s disciples who have taken not just Copenhagen, but also the world by storm, can have that effect. Yet Kofoed, almost zen-like in his calm, remains focussed. He crafts menus that stand apart from others in the city, while still being very much of Copenhagen. His food is creative, clever and technically stunning without being obnoxious. And he combines his Danish roots with a style and sensibility that feels more modern European than New Nordic. He’s not a household name like Redzepi, yet he’s gained admirers among those in the know. He’s also earned serious accolades, from winning gold at the culinary Olympics, Bocuse d’Or, to something Noma has never accomplished: earning three Michelin stars.

Inside Geranium’s crisp, white dining room — which stands in contrast to the earthy, natural wood-filled designs of many Copenhagen restaurants — we sat with Kofoed to discuss his odd location, reserved style and being a chef in the age of Instagram and Netflix.

How’d you end up in a football stadium?
We were located in another area—a really challenging place—the King’s Garden in Copenhagen. It was a very old, romantic kind of summer house that was charming but also difficult because the heat never really worked. We did quite good food, but some nights it would be freezing and I couldn’t do anything but walk around offering free cognac. We needed to do something else.

We had the opportunity to go here and I was skeptical in the beginning. But when I came up to the room and saw the view, the landscape and the city and the water, I knew we could create something interesting. We were the first ones in this side of the building, and you have the field where the national team plays and that part of it is funny. You don’t see it in the dining room, but you take guests on a tour in the prep kitchen and they see the football field out there and they remember they’re in a stadium. There’s a good energy here.

That decision to move here came at a pretty terrible time.
It was in the middle of the financial crisis. It was the worst plan to open a restaurant like this in this location in Denmark. In the beginning, we did not have too many guests. But in 2011, luckily, I won Bocuse d’Or and that created a lot of attention. If it wasn’t for that, we’d probably be closed many years ago.

What made you so drawn to that competition? I’ve talked to other people doing it, and they pretty much have to quit their jobs to make time to train, yet you kept going back, even after winning bronze and silver.
I love the process. I could see how I developed as a chef and learned a lot about myself as a human being by putting myself under the strongest pressure in the culinary world. I have a strong winning mentality and you also need that, of course — otherwise, you can never do it. Especially winning the silver and going for the gold. I was saying to various newspapers that I’m going for the gold and I will not be satisfied if I’m number two. Normally you would say “I will be glad if I’m in the top five.” But I really believed that this was my mission.

How did Bocuse d’Or help you develop as a chef?
When I started, I worked on myself to be ready for the challenge. I started running more and eating healthily so I could perform on that day. I trained myself to be physically and mentally ready. I use those tools in the kitchen here. You’ll see us in a busy restaurant and there will be 15 chefs, but you will never see them stressed.

So you’re not yelling at your cooks like Gordon Ramsay?
No, that style is not working.

That old way that kitchens were run is out.
There’s no future in that.

Why do you say that?
Who would want to work for you more than six months if you’re screaming at them constantly? I mean, I can be mad and I can be disappointed if something is not done right and I will tell them, but in a polite way. I will never throw something at them or yell at them. I would just do like this and then I will show them how it should be done. That’s how we can do it. And then next service we can always do it better.

People have talked a lot about kitchen culture in the last year and how it can be toxic and the work all-consuming. Did you feel that yourself?
When I had my first child it was something like an instinct waking me to say, “Okay, Rasmus, you need to take care of yourself and your loved ones.” I’ve tried to feed them in a good way and be healthy. But I can see now that before a lot of my colleagues and I were eating very unhealthy stuff. They come home tired from work, get something easy like candy, Coca-Cola, some chips, fall asleep and work the next day. But that’s not working, it’s not good for you. I’ve been running and doing sports, René [Redzepi] is doing Crossfit.

You just drop down to the stadium and go work out with the national team?
Actually, there’s a really cool fitness centre in the building. My business partner and good friend Søren started working out two years ago and I can see how much energy he comes back with. This year, we gave all the employees free access to the fitness centre, they can do yoga and work out when they want to.

That’s your management style, but how would you describe the food?
I use very seasonal and local ingredients and we change small things daily. That really makes sense in terms of getting the most fresh and best quality and taking care of the environment. But I believe that something extra can happen when it’s seasonal food on the plate. I look outside and I see the colours of the leaves are changing. The trees are actually telling me to step up and be updated, that I really have to change things. It’s very vegetable based. It’s very seasonally created.

Since you opened Geranium, how have you seen the city’s dining scene change?
Back then, there were a few good restaurants but you would not see people flying in to go for a dining weekend in Denmark. Everything has exploded. There are some great restaurants and a lot of fascinating, creative people. The younger generation has taken over with responsibility, with curiosity, respect for the past and just risking all this to open a new place because we want to.

There’s Noma’s influence, of course. They win number one position in the 50 Best list and the same year I win Bocuse d’Or and it creates, how you say, good echoes in the worldwide food industry. And there are a lot of René’s former colleagues and employees out there. Also a lot of my former chefs. I mean, they’re maybe a little more quiet, I guess. They’re not like, “Here we are!” [laughs]

Like whom?
There are a lot of them in Copenhagen and one in New York, Ronny [Emborg] at Atera, who I believe is one of the greatest and most underrated chefs in the world. He’s so damned talented and creative. He can make the most amazing, beautiful meal, but because he’s not big on Instagram, no one wants to write about him. He’s so skilled and people should be like, “Wow”. But that’s not the way the world works. If you have a good story and if you’re on Netflix, you can be a world-famous chef overnight. How are your skills in the kitchen though? Sometimes I miss a little bit of the focus on what’s going on in the kitchen, and the experience, and skill and passion, instead of just having a good story.

Can Noma’s influence create a sameness where everywhere is serving comparable food on the same earthenware plates?
Sometimes there are too many doing the same and it’s difficult to say is that plate from this restaurant or this one, or another one? If you don’t have the name it’s difficult to tell the difference sometimes. Of course, I’m inspired by the people in the city but most of all the landscape and the season. Also, I think we really succeed with just choosing our own road. We are not part of the manifesto. We are not a part of another restaurant. We are independent.

And you’ve done something no other Danish restaurant ever has – earned a third Michelin star. Did that make you feel you’d reached a pinnacle?
The third star was never really my strong motivation. I’m always striving for something, but the Nordic region had never had a three-star Michelin restaurant. The question was will it ever? It wasn’t something we expected, which is the best way to get it.

What was it like when you did?
I still remember that call here. As usual, we were just having breakfast together with the staff. There was a press conference in D’Angleterre, one of the beautiful hotels in Copenhagen. A lady in the office told me, “Rasmus there’s a call for you, it’s the Michelin guy.” Then my heart stopped because why would they call me now—maybe we lost one?

Then he said, “I would love to inform you that you just received the third star. Congratulations, please come and attend the press conference. Get your ass down here and keep it confidential.” I wanted to scream out to the world. Søren came and we hugged and were crying a little bit and there was electricity. Then we put on poker faces and told the staff, “Ok, we need to go”. They knew something strange had happened, but they didn’t know what.

It was a great day. It’s nice to chase something, even if you don’t know what it is, but the motivation will never come from [acheiving] the Michelin star.