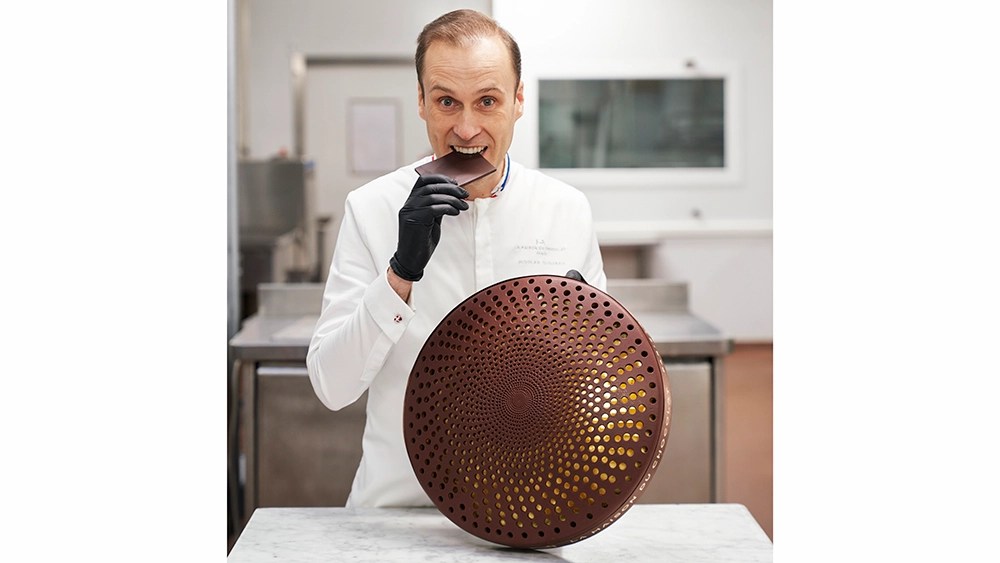 In one month, chef Nicolas Cloiseau consumes the same amount of chocolate the average French citizen eats in one year: about 16 pounds—just part of his job as the mastermind behind La Maison du Chocolat’s confections. He travels the world tasting samples from key single-origin sources, such as the one from São Tomé, just off the coast of Africa. For Cloiseau, the delight in working with chocolate is in the variety of both the raw material and the final product, from ganache to pastry to artistic pieces.

Cloiseau creates original sculptures for La Maison twice a year—for Easter and for the December holidays—that can sell for several thousand dollars, but he also crafts them on commission. For Saint Laurent last Halloween, he created a series of chocolate skulls, one of which he keeps in his office. His most complex (and expensive) confection to date was a chocolate necklace in the shape of a snake for jeweller Boucheron that took 200 hours to complete. The snake’s head and hissing tongue supported a 20-carat yellow diamond. It sold for a delicious $1 million.

Cloiseau’s signature technique is perforation, and with it he achieved the coveted distinction of Meilleur Ouvrier de France, awarded to the country’s finest craftsman. He never forgot that one of the jurors once said that if someone was able to use perforation to create chocolate lace, that person would probably deserve the Meilleur award. “I kept that in mind and continued to fine-tune the technique,” he says. “It brings light and air to the design of a medium as solid and dark as chocolate.”

Tempering the chocolate—raising and lowering the temperature during the melting stage—is key when creating a sculpture. “Respecting the different steps of tempering makes the difference between excellent and bad chocolate,” Cloiseau says.

2. The Shape of Things

Moulds for each sculpture are produced in-house by the creation department from a hand-carved matrix in plaster or wood. Depending on the complexity of the part, the mould is made in flexible silicone or rigid food-grade plastic.

Cloiseau completes a prototype in dark chocolate, which helps him understand the volume of the piece and determine which elements should be dark, milk, caramelised white or white chocolate. Here, he has made a half sphere—one of two—that will be used in creating a sun.

Next, using calipers, he etches precise points into the half sphere to mark where he will drill holes.

At the points of intersection, Cloiseau carefully drills using a model-making drill. He has 10 different drills in his lab. Dark chocolate works best when the design calls for perforation because of its more robust structure.

With a paring knife and then a wide brush, he gently removes the shavings from the top disc.

He applies vegetable oil to the second disc, to serve as the “glue” to secure the gold leaf.

Cloiseau attaches sheets of 23-karat-gold leaf, which are perfectly edible. “Gold brings light,” he says. “It illuminates the creation.” Here, it will become the “rays” of sunshine.

He fits the top layer over the bottom one. A liquid chocolate tempered at 88 degrees Fahrenheit is applied, which, when hardened, will seal the two pieces together.

As a final flourish, a ribbon is added around the rim of the piece. The chef props up the finished sculpture as he takes a bite of one of his chocolate bars—he never eats his artistic creations, not even the broken ones, a mindset of respect for the culinary art that began during his childhood, when he would stash his chocolate Easter bunnies in his closet to preserve them.

All photos, courtesy of Puxan