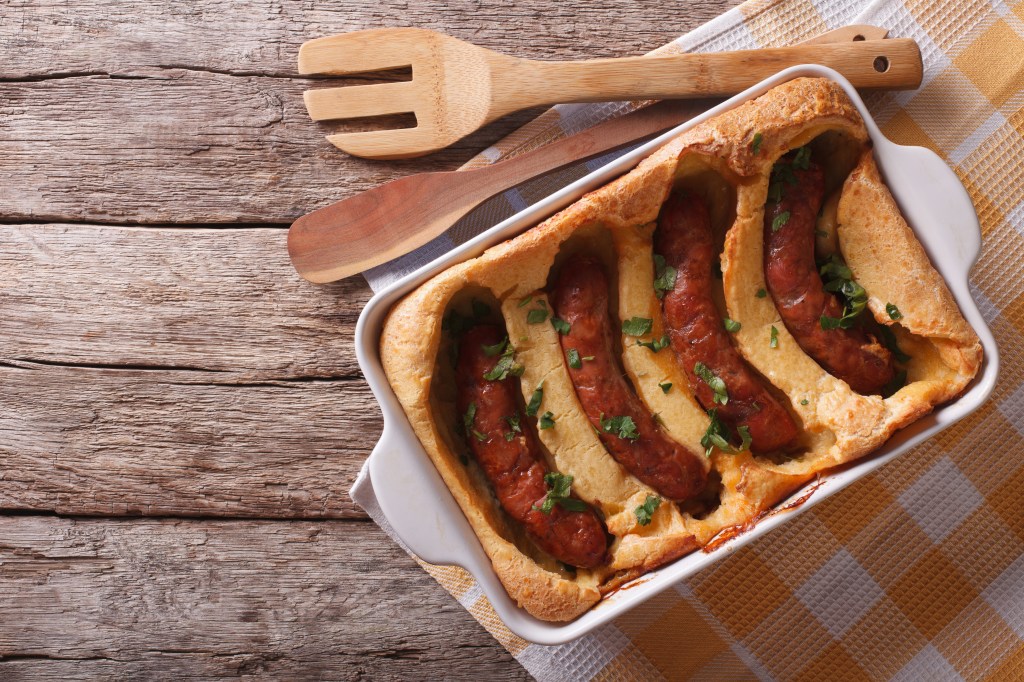 It was the American food writer Bill Marsano who once said, “The British Empire was created as a by-product of generations of desperate Englishmen roaming the world in search of a decent meal.” Perhaps he was not far off from the truth – dark colours, tinned food, too many preservatives… The Great British fry up, the Sunday roast, Betty’s hotpot or a plate of fish and chips were the dishes we were known for: fare that left much to the imagination, compared to the exotic culinary delights on offer abroad.

From 1940, wartime rationing meant basic foodstuffs such as sugar, meat, fats and cheeses were bought sparingly and the rapid industrialisation of tinned food, such as spam, offered little to the taste buds. In fact, during that decade of food rationing, it is widely reported that people became healthier, and that the onus was on eating as much local produce as possible: the positives of which are glaring to us today.

Coming full circle, we see this happening again today, with the Government announcing a Food Strategy that focuses on farming sustainably and locally grown food. Much more attention-grabbing, though, is the resurgence of affection for traditional British food. While once the UK’s people were making do with The National Loaf – a nutritious but barely palatable bread, introduced by the Federation of Bakers during the Second World War – in the pandemic years, people were at home making their own banana variety! Culinary skills are sharper, foodies flash up across social media and artisan delicacies are having their moment. Even the humble vegetable is being pickled, soaked in speciality vinegars and going back to its earthy roots (but without so many pesticides).

Fresh produce, grown on-site, is all that ends up in The Small Holding kitchen

During 2021, the number of independent food retailers increased by 2,157 units across the UK, according to latest figures by the Local Data Company – the first time that more independents have opened than closed in Great Britain since 2016. The demand to be more environmentally aware and a growth in passionate producers working at a local level is fuelling the fire when it comes to artisan food and beverages.

It was such passion that inspired Ash Meneely to set up The Earth & Ocean Food Company, a platform via which people can buy excellent quality food and drinks made by independent producers. As a TV cameraman, travelling around the country with chefs such as Raymond Blanc and James Martin, Meneely was surprised to see how many artisan and local food and drink producers there were hidden across the UK: producers who have their own unique story to tell and a passion for the staples they are making. Now, Meneely has set up an enterprise which tells each producer’s story – they run from jam makers and bakers to Kombucha distillers and lamb Ragu specialists – whilst also offering them a space to show off their wares.

“It may have been ‘Cool Britannia’ in the late 90s that saw a shift start to happen, making British food ‘cool’ again,” Meneely tells Robb Report. “Down-to-earth chefs like Jamie Oliver were using local ingredients and shaking things up, and there was the launch of the gastro pub. This marked a cultural separation from high-end, elite chefs and their domain of nouvelle cuisine to creating a far more achievable food world.

“Nowadays, as our awareness of sustainability and food miles grows, so too does the number of producers emerging to create food they are passionate about. Look at the city workers leaving the capital to set up their own food businesses in rural areas! Artisan and regional producers have allowed us to take ownership of the food we are buying and origin is now very important to us.”

Scattered across the country in hidden corners from Orkney to Scilly, these are producers whose stories Meneely highlights – including the new ways in which they are producing and the tantalising flavours they are creating. He adds: “These producers are not just trying to smash out a million bottles or jars monthly – they just want to make the best quality product possible.

Ash Meneel, founder of The Earth & Ocean Food Company, was astounded to discover the number of artisan producers there were hidden across the UK

“If you’re having a nice dinner party, then you will definitely find a speciality that is well-made and British made. We want everyone to be able to make amazing food in their own home, and that’s becoming easier because these home grown producers are becoming more accessible today – which is making us all become more adventurous in what we eat. There’s a huge uprising right now.”

From pasta made in Yorkshire from locally grown wheat to people discovering their grandfather’s favourite Piccalilli recipe to sweet winter spiced vinegar that’s great in water (never mind on a salad), there are many fine products available. According to Meneely, The Earth & Ocean Food Company’s ‘Free From’ produce is its fastest growing category: “Whatever the spread or sauce, those with special dietary requirements will not be left out,” he says. “I had two kombucha distillers contact me in a week; a few years ago I would have struggled to find one UK producer. We also have a brewery making beer using natural fermentation instead of CO2. These producers are careful about the ingredients of their produce and are ethical about sourcing ingredients locally.”

It isn’t only people in their own homes cooking up new dishes. Britain has become a much better place to eat out too. Awarded a Green Michelin Star in 2021 and 2022, chef and owner of The Small Holding Farm & Kitchen, Will Devlin, thinks this development is down to the young chefs – always hungry to jump on new inventions and open up pop-up spots – coming up through the ranks. “It’s not always supported, most people will go into a chain restaurant because they know of it but the new people creating this food scene in Britain need to be supported. If someone in your area has a passion for creating something different then support them and go eat there, they have ethos and talent,” encourages Devlin.

His kitchen and farm – found in a country lane in the village of Kilndown on the Kent and East Sussex borders – is all about growing, foraging and cooking the best ingredients. The taster menus use home-reared and home-grown ingredients fresh from the farm, which is less than 10ft from the kitchen and includes over 180 varieties of vegetables and fruits: from ‘Red Blaze’ broccoli and ‘Graffiti’ cauliflower to ‘Viola’ radishes and ‘Midnight’ courgette. There’s something new whatever the season.

Will Devlin, owner-chef at The Small Holding  Food Story Media

“Climate change and Covid are factors that have seen kitchens change,” says Devlin. “We’ve come back with more gratitude to be able to cook for people again. Once a month, we shut our doors to hold education days for our team, so we can inspire and learn from each other. We visit local vineyards or the dairy to find out more about home-grown cheeses and what makes a happy cow.”

While Devlin is encouraging his own team to learn about sustainable methods for the future, his own inspiration comes from his farm. He tells Robb Report that beans, pulses and fermented foods are now on trend: “In our kitchen, we’re cooking with a lot more beans and pulses, and are working with companies such as Hodmedod (https://hodmedods.co.uk ) that sources and supply beans from British farmers. “These peas and beans provide a different type of protein so we don’t have to rely heavily on wheat. It’s our environmental contribution to use ingredients that are good for the planet.

“Another pastime becoming more fashionable is pickling and preserving, we see more people are getting into their gut health. We preserve, pickle and jar at the restaurant and the menu kicks off with our home-made kombucha.”

Herbs such as lovage, one of the only herbs native to Britain, is one of Devlin’s favourite. While it is hard to get hold of, he grows lovage at his farm and uses it to add a savoury note to his dishes alongside wild nettle that he also dries and uses to fertilise his soil. The Farm Salad is a favourite to prepare in the summer, plating up delicate dishes of herbs, salads and flowers and dressing it with a home-made vinegar to add depth of flavour. Come winter, the dishes include artichoke, pumpkins and wild mushrooms.

Devlin adds: “Eating a local diet is key. Growing our own produce on the farm brings an understanding and honesty back to our kitchen. Making the most of our harvests when the ingredients are at their prime – while also preserving and conserving them to use throughout the year – keeps us concentrated on the natural cycle of the land and helps us to create full flavoured and imaginative dishes.”

Today, there are more cheeses produced in the UK than France. Sparkling English wines are turning heads. Home delivered food boxes are growing in popularity and locally produced ingredients are tastier than ever before. While chefs are passionate about using locally sourced and sustainable produce, it is the consumer – now, more than ever, open to trying new tastes – that is testament to the food revolution happening in Britain right now.