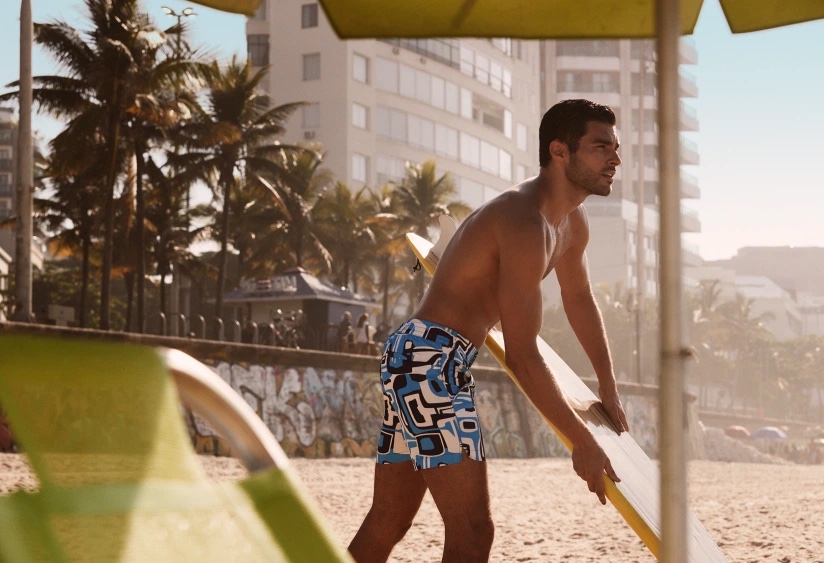 From shoulder-to-knee one-pieces to Hawaiian-print board shorts via tank tops and elastane “budgie smugglers”, the evolution of men’s swimwear has been, from a sartorial viewpoint, a bumpy ride. We got there in the end though: the current go-to cut – shorts rather than briefs, and shorter than the knee-tickling “Bermuda shorts” of yore – is, when it comes to gentlemen’s beach wear, preferable to all that came before it in the previous century.

And, the great thing about swim shorts is, they represent notch up the flamboyance a lot higher than you would with any other items in your wardrobe (imagine a necktie or suit lining emblazoned with one of Slim Aarons’ photographs of the Hotel du Cap Eden-Roc, as the classic swim shorts by Orlebar Brown are, and you’ll get our drift). Our pick of this summer’s offerings from the aforementioned British swimwear brand – whose products you’d wear as happily in a salubrious beach-side lunch spot as you do on the beach itself – come to you via the camera lens but of Stuart Cantor, who gives the late Aarons a run for his money when it comes to capturing old-school European glamour for posterity. In this instance, the Italian coastal town of Sorrento is his subject in a shot dripping with La Dolce Vita. The shorts (£225), made in the brand’s mid-length Bulldog style, have a tailored look, thanks to adjustable tabs at the waist.

Arguably the brand most responsible for converting men to swim shorts, and consigning tight-fitting trunks to the vaults of sartorial history, is French brand Vilebrequin, which was founded by a young itinerant motoring journalist by the name of Fred Prysquel. The story begins in the summer of 1971, when Prysquel found himself so besotted with a young woman he’d met whilst on holiday in Saint Tropez, he travelled back there on a wooing mission. Such amorous pursuits brought out the self-consciousness in the young Prysquel, though, and he didn’t feel comfortable wearing the ultra-tight trunks popular at the time. Having observed what surfers in Borneo and Australia were wearing, he made, for himself, what would become modern swim shorts. 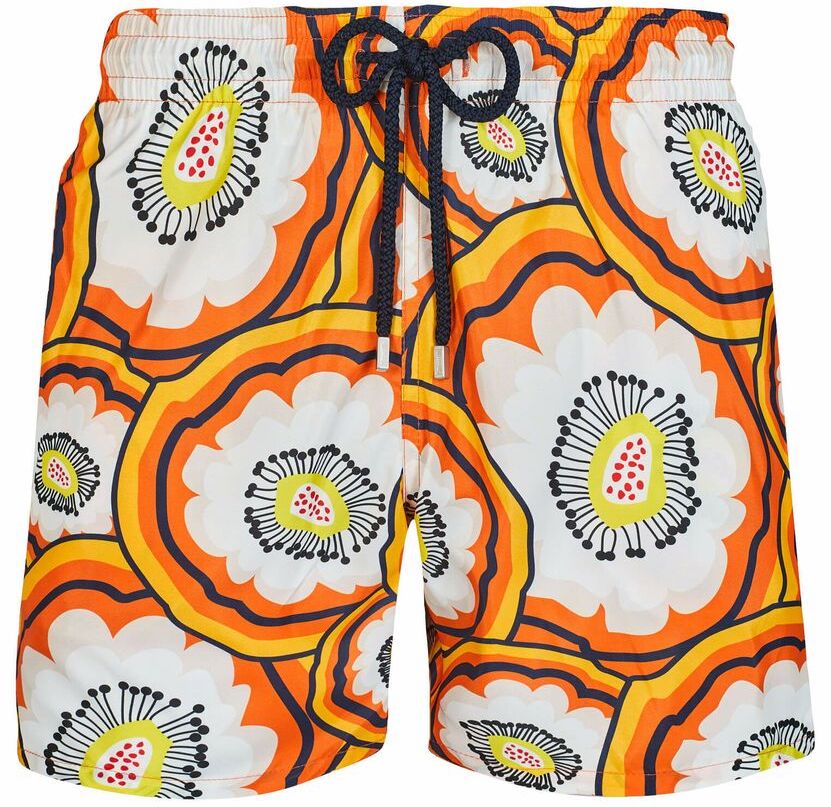 Before long, requests for similar pairs were coming in right the way along the coastline uniting France and Italy, so much so he began sourcing colourful fabrics from Africa and had to recruit any local who owned a sewing machine to keep up with demand. Fast-forward half a century and Vilebrequin is one of the foremost luxury swimwear brands in the world, famed for its bold, statement prints – such as those below (£215), part of a 50th anniversary collection, which revisit a 1979 design based on Hawaiian anemone flowers. Made from eco-friendly fabric and featuring an elasticated waistband with drawstring, the Mahina 1979 Anemones men’s swim shorts are so lightweight they can be folded into the back pocket.

Patterns can, of course, pack as much significance as pictures: a case in point being  the Ipanema Print sport swim shorts (£145) from Frescobol Carioca (see also main pic), a label which seeks to translate Brazil’s beachy, sun-soaked vibe into clothing. Inspired by the mosaic tiling that lines the streets of the world-famous beach in Rio, the trunks capture the Carioca spirit in sartorial form. Check out, too, the natty pair with light-green wavy stripes, from the brand’s forthcoming Garrett Leight capsule collection. 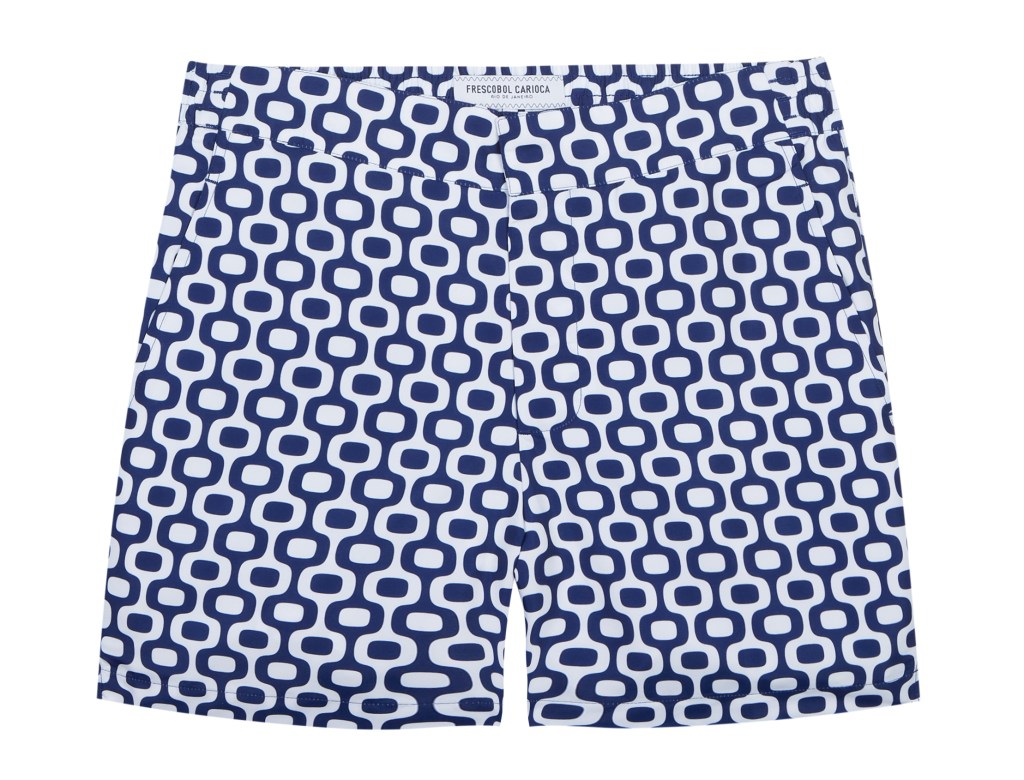 Flowers, butterflies and paisley prints all feature in the latest swimwear offerings from Italian fashion house Etro – never a brand to shy away from bright, eyebrow-hiking designs – but we’ve plumped for this pair (£220) with a striking geometric carpet print; Tom Ford’s approach to swimwear tends to echo that of Connery’s Bond: one colour, short cut – but the brand has been known to go off-piste on the chromatic front, as is the case with the tropical-print swim shorts (£470) seen below. 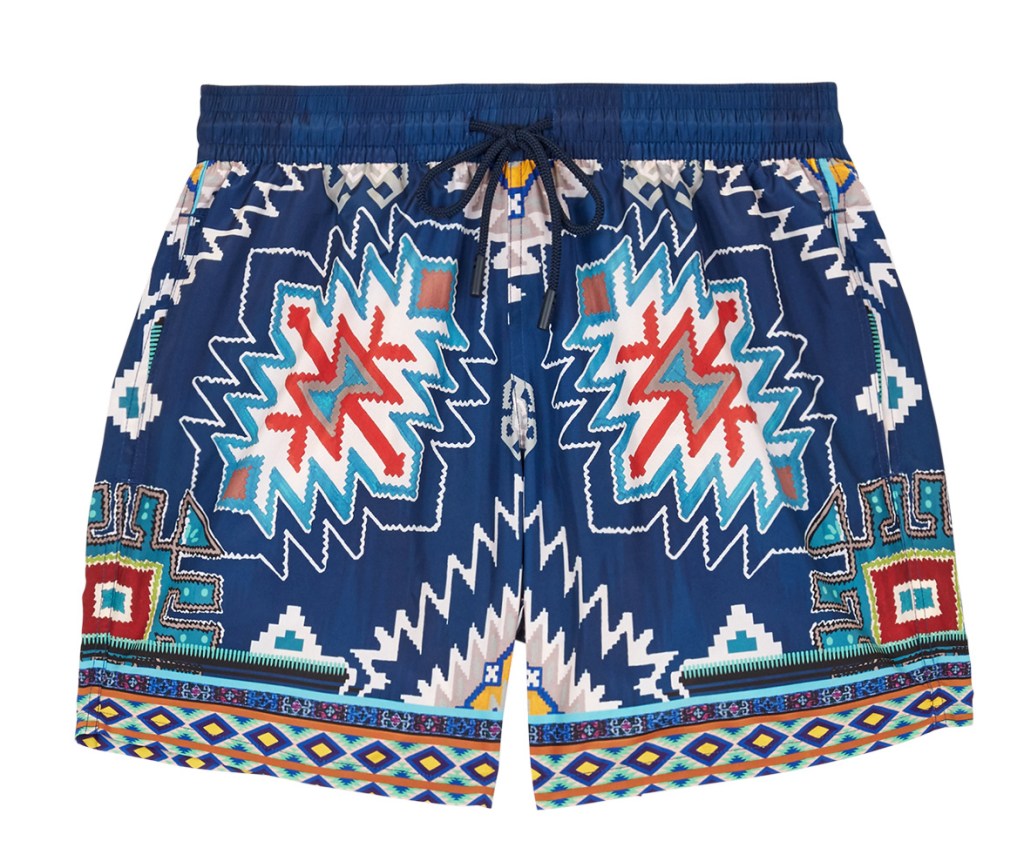 What Beau Brummel would have thought of all this is anyone’s guess – the Regency England dandy did, after all, once state: “To be truly elegant one should not be noticed.” But then he lived long before one a Riviera romance in the early 70s changed men’s swimwear forever. 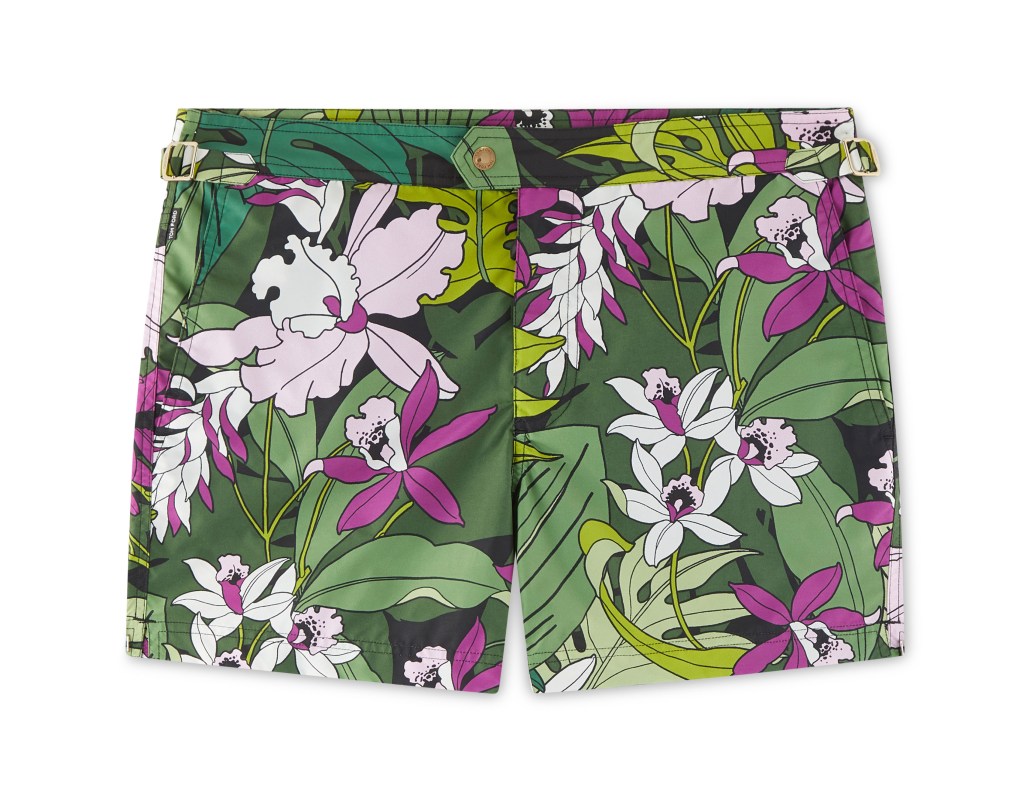