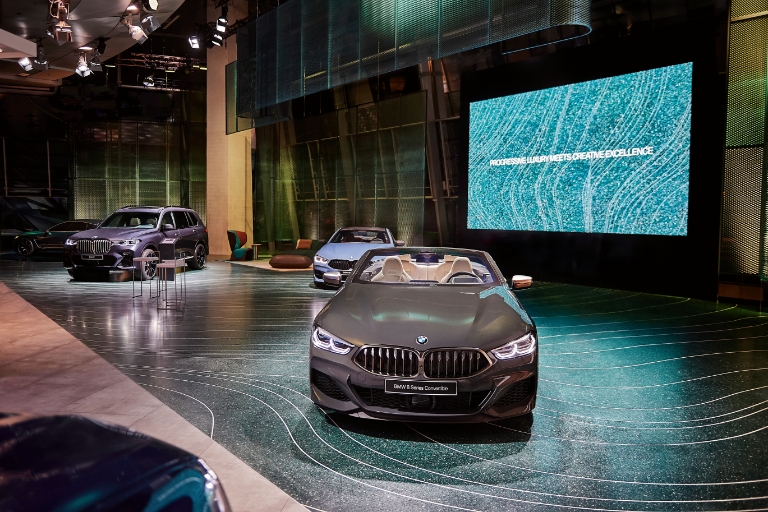 Luxury car buyers have never had it so good, but the huge increase in choice means that design has become much more important. Styling has always distinguished a brand’s products from that of its rivals: a BMW must always look like a BMW, with some familiar cues acknowledged and referenced. But design also needs to position a car appropriately within a wider hierarchy – in the case of the 8 Series, right at the top. The 8 Series has to look like a sportscar, because that is what it fundamentally is, but it also needs to communicate a level of luxury appropriate to its position.

Some historical context: the first BMW 8 Series, launched in 1989, was a technical tour de force and its wind-cheating design made it one of the most influential cars of the period. It was one model within a small range, its pinnacle position unambiguous. The new 8 Series, meanwhile, is also replete with halo offerings. We’ve already seen both Coupé and Convertible versions and at least one other will follow. All must have styling to match the driving experience.

One of the first rules of design is that a product should look like what it is, and that styling should never make promises that can’t be delivered. While that might sound obvious, it’s a principle that is frequently broken – think of those butch-looking SUVs that are incapable of venturing off-road. For the 8 Series, this rule dictates that the vehicle must look both dynamic and luxurious.

“For a BMW, one should be able to identify at first glance what kind of experience one would have with it, especially with our large and particularly luxurious vehicles,” van Hooydonk explains. “Design has to be clear, more modern and more emotional – an expressive surface play in the foreground and with the dynamics emphasised even more than before by the vehicle body. Luxury must be reflected to the outside world in a very matter-of-fact way. In English there is a beautiful word for it – ‘sophistication’. For designers – our team has more than 700 employees at four locations worldwide who are encouraged through constant competition with each other – this means that every detail counts.”

But it is also vitally important not to fall into the trap of doing too much. Everything needs to be there for a reason – functional rather than simply decoration. “A few, but very precise, vehicle lines underline the graphic design of the surfaces,” van Hooydonk says. “The vehicle body looks more powerful, refined and luscious with its lavish surfaces, but it cannot lose the sportiness that is typical to a BMW. This is possible only because we work out every feature of a vehicle individually.”

The line between just enough and too much remains fine, but it’s one that van Hooydonk and his team have to judge perfectly. BMW design can never be bland or lack emotional impact, but nor can it result in cars that try too hard. That’s as true inside as it is with the exterior, with an increased emphasis on both connectivity and seamlessly managing the relationship between a vehicle’s occupants and its smart systems. The days when controls could be corralled into panels of buttons and switches are long gone.

“In today’s mobile world we spend more and more time in various modes of transport and cars are now like rooms on wheels,” van Hooydonk says. “One wants to feel completely comfortable in them. The steering wheel and anything that you touch have to feel perfect, as do the materials that surround you. The eye does not want to be disturbed by unclean lines or individual components. The interior of a vehicle is a living space, it’s about being surrounded by the highest possible quality.”

Ultimately, it is also about choice, and about helping users to create their own relationship with the car. “We don’t want to tell our customers how they should define luxury,” van Hooydonk explains. “The perception of luxury is very different worldwide. But a central aspect that is visible everywhere is the increasing significance of personal time. It is becoming the most valuable asset.”